Advertisement
The Newspaper for the Future of Miami
Connect with us:
Front Page » Transportation » Firms join in public transportation move with rides, credits 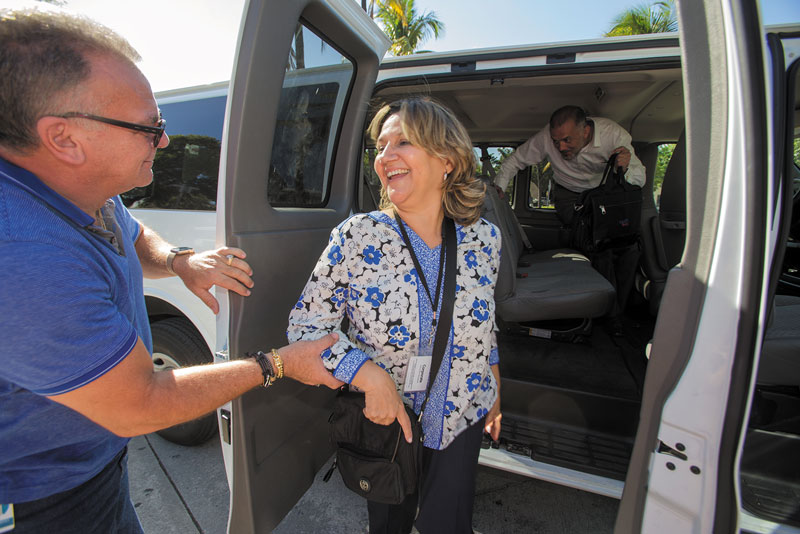 Some Miami-Dade businesses are joining efforts by residential developers and local government to help alleviate the county’s traffic woes by making it easier for their employees to use public transportation.
Yet practices that cater to the city’s car culture, some say, make switching to mass transit impractical.
TotalBank provides a van to carry people who work at its Coral Way branch to and from the Coconut Grove Metrorail station – a convenience its president, Jay Pelham, says makes good business sense.
“In today’s market, in any type of business,” he says, “there’s fierce competition for the best talent. So we have to build the right environment and culture where our employees can feel as comfortable as possible. And today, transportation is a big challenge for all of us.”
TotalBank, Mr. Pelham says, foots the bill for Metropasses for employees who opt to use public transportation. At the bank’s downtown headquarters building – which incorporates a Metrorail station – more than 100 employees, or 30% to 40% of the workforce, use this option. Many at the Brickell Avenue branch take advantage of it as well.
But the Coconut Grove Metrorail station, closest to the Coral Way branch, “is a bit of a hike,” Mr. Pelham says. “So we have a company van ferry them back and forth.
“Of course, for certain jobs, such as IT repair, people still need a car because they have to go to different locations. But people who stay in the building all day appreciate the fact that they can take advantage of that service.”
Through its payroll program, the national law firm Hinshaw & Culbertson has long allowed employees to deduct the cost of monthly public transport passes before taxes, says Ronald L. Kammer, co-partner in charge of the Coral Gables office.
“In cities that have very good mass transit, such as Chicago, San Francisco and New York,” he says, “up to 75% of eligible employees take advantage of the benefit.
“But in our Coral Gables office, only one person uses it.”
He attributes this to a number of issues, the first of which is Metrorail’s limited reach.
“I myself am not a big user of mass transit,” Mr. Kammer says, “though when I lived in Chicago I would take it every day. It’s a matter of convenience, because to use it here I would have to drive to the station, park at the garage, then get off the train and take the trolley.”
Metromover makes it easier for people who work downtown, he says, but the fact that it’s traditional in this market for employers to pay for employee parking “is a disincentive to using mass transit.”
Miami-Dade Transit’s Corporate Discount Program – available to public and private companies, government agencies and nonprofits – allows participants to save on commuting costs through group discounts and pre-tax savings by obtaining monthly public transportation through a tax deduction from their employer under IRS Code 132(f), according to its website. (Details: http://www.miamidade.gov/transit/corporate-discount.asp)
Some residential rental buildings in the urban core offer incentives to tenants who don’t move in with a car.
Jerome Hollo, executive vice president at Florida East Coast Realty, says his company will offer a $1,000 annual credit to renters without cars at Panorama Tower. The project, at 1100 Brickell Ave., is expected to open this fall.
“We’ve designed the building to provide for those who want to free themselves of the expense and maintenance of a vehicle,” Mr. Hollo says. “There’s a Metromover station a block away and free trolley service in front of the building, and we feel that ride sharing takes up a lot of the slack as well. Also, there’s a pet spa, a market, restaurants, an 18,000-square-foot gym, a coffee shop and a post office in the building – and for those who want more, Brickell City Centre is a block away.”
The Related Group has been scaling down the parking component of downtown properties for more than a decade.
“Right now,” says Steve Patterson, president & CEO of Related Development, the company’s multifamily and mixed-use arm, “we’re still building parking spaces that five years from now are going to be empty because, between services like Uber and autonomous vehicles, people are not going to need cars as much.”
Because incomes are not going up as fast as the cost of housing, he says, people are going to have to economize somewhere.
“And,” Mr. Patterson says, “cars will have to go.”