Advertisement
The Newspaper for the Future of Miami
Connect with us:
Front Page » Top Stories » Focus on NAFTA renegotiations, international trade in Miami 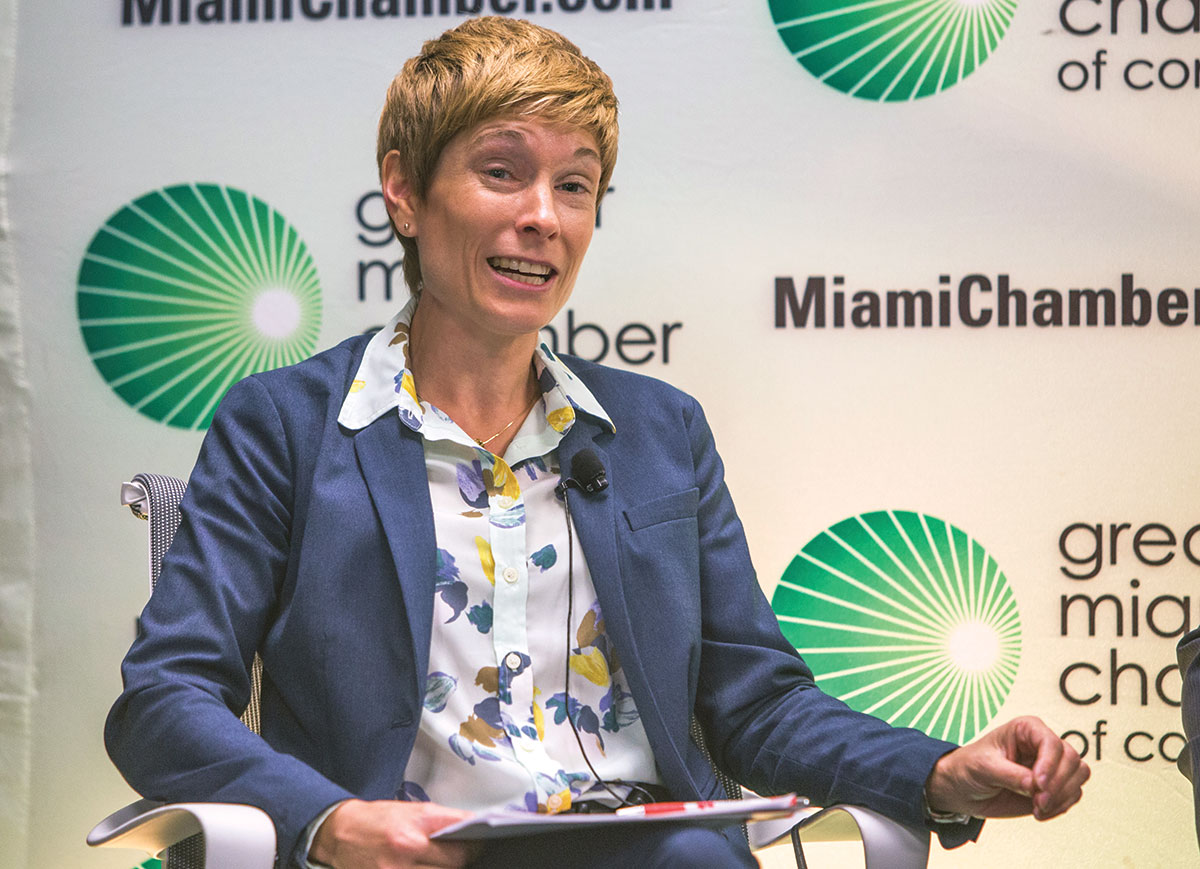 Panelists at last week’s Greater Miami Chamber of Commerce Goals Conference gathered to speak about trade and goods under the new administration, focusing especially on NAFTA renegotiations and international trade activity in Miami.
Elaine Brouca, consul and senior trade commissioner for Canada in Miami, expressed the importance of the North American Free Trade Agreement for trade between the US and Canada.
Last year alone, $635 billion worth of goods was exchanged between the two countries, or roughly $1.7 billion worth of goods per day.
“The agreement creates jobs on both sides of the border,” Ms. Brouca said, adding that roughly 9 million jobs in the US depend on trade with Canada.
“In regards to Florida specifically, the relationship is based on more than oranges and snowbirds,” she said. “Florida exports more than 25% of its agricultural goods to Canada, 4.4 million Canadians visited Florida last year and contributed $5 billion.”
Furthermore, Canadians own $50 billion worth of real estate in Florida and over 400 Canadian companies have invested in Florida, creating 43,000 direct jobs.
Most importantly, however, Ms. Brouca said, what Canada and the US share is the desire to avoid falling into a position of “protectionism.”
“NAFTA, in our opinion, has been positive for all three countries,” she said, “so whatever we do in this renegotiation, it needs to not harm our current really good status and put us in a bad position.”
PortMiami is one of the largest beneficiaries of international trade in the country, said Eric Olafson, manager of Foreign Trade Zone 281 at the port.
On average, visitors to Miami stay an average of one week, but others, such as Canadians, can spend anywhere from an average of four weeks to six months, and others yet, like visitors from Latin America, can stay even longer.
“They have to buy furniture, which comes from Asia, which comes through the port. They have to buy clothes, which comes from Asia, which comes through the port,” Mr. Olafson said.
“Miami is the shopping cart of the Americas. There are so many people coming to Miami and doing a year’s worth of shopping in a few days.”
Refrigerated containers now make up 30% of the volume at PortMiami, Mr. Olafson said, carrying in fruits and citrus from Peru and Argentina and other perishables.
The port has seen an 11% increase in cargo from Asia, year to date, with many manufactured goods coming from Asia.
Seven countries do a minimum of $1 billion in business with PortMiami, Mr. Olafson said. These include China, Honduras, the Dominican Republic, Costa Rica, Panama and El Salvador. Colombia, though not yet part of the “billion dollar club,” is expected to join the ranks this year.
Emilio T. González, director and CEO of the Miami-Dade Aviation Department, said that Miami Internal Airport is the largest cargo airport in US, and although air freight has been flat for several years, “overall things are growing well.”
“We monetize our strongest asset,” he said, “which is our supply chain and our ability to handle perishables.”
The airport’s budget this year is $1.26 billion, Dr. González said, but cargo accounts for only 10% of activity at the airport. However, 70% of international tourists to Florida fly in through MIA.
“This community has been a global distribution center,” said G. Lee Sandler, founder of international trade consulting firm Sandler, Travis & Rosenberg.
“Under this and prior administrations, we were challenged by increased scrutiny on immigration and increased regulations in goods transited.”
New frontiers in trade, like e-commerce, have “transformed the way cargo moves,” Mr. Sandler said, with agencies such as US Customs and Border Protection creating e-commerce departments.
“Change can be a problem for us,” he said. “They are going to be changing the way they regulate cargo moving into US.”
Furthermore, he said, federal agency staffing is going to change because of the intention of building a wall on the southern US border.
“The new administration’s budget freeze on government hiring and funds directed towards border [is going to be a] problem because as we try to grow we need those funds.”
“Florida exports high-tech material components subject to scrutiny over many agencies,” Mr. Sandler said. “Over the last few years, we tried to condense that and make it easier, but the new administration probably wants to undo that, so the emerging high-tech industry in Florida may be hurt.”
Ms. Brouca said that “Canada understands that a free trade agreement and NAFTA in particular cannot encompass every piece of trade.”
“We can’t think it’s some golden rule that will solve everything,” she said. “International students and tourism will not fall under NAFTA.”
“Canada is all for the modernization of NAFTA because there are things in there… that need to be updated and modernized.”
There are two elements not included in NAFTA “because they just weren’t around” when NAFTA was drafted, Mr. Sandler said.
These two elements are e-commerce and intellectual property.
Moderator Brian Fonseca, director of the FIU Jack D. Gordon Institute for Public Policy, asked panelists for their thoughts on the administration moving away from multilateral trade and more toward bilateral trade.
“The country of origin rules drive supply chain,” Mr. Sandler said. “Every time you have a different rule to comply with, it changes the way you do business.”
“Instead of harmonizing rules, we’re making it more expensive, more complex, and maybe even impossible,” he said. “The administration says, ‘We’re going to renegotiate and come back and harmonize,’ but that’s probably not going to happen.”