Advertisement
The Newspaper for the Future of Miami
Connect with us:
Front Page » Communities » Doral is the fastest-growing large city in Florida

Doral is the fastest-growing large city in Florida 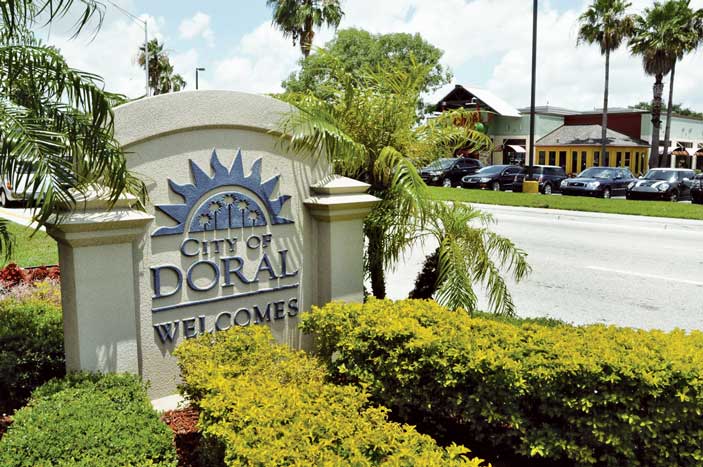 Doral was the fastest-growing large city in Florida during the current decade and eleventh-fastest in the nation in the period, according to new US Census data analyzed by the FIU Metropolitan Center.
Miami was the state’s eighth-fastest growing city in the same six-year span, with a population growth of 13.1% – almost 53,000 people, the study found.
Miami-Dade County’s total population grew 8.2% during the period, yet during the single year from 2015 to 2016, a startling 22 of the county’s municipalities actually lost population slightly – though no other as high a percentage as the nine-tenths percent loss of the 843-resident Town of Medley.
The figures did not surprise the Metropolitan Center’s Dr. Maria Ilcheva, whose doctorate in political science is being put to use directing surveys and polls in seeking public policy solutions for the community. She sees the data as a part of the “ultimate baseline for any decision” that governments here make.
“What we’ve been observing at the county and region level is continued by the city data,” she said.
“What is notable is… who is staying here continuously,” she said.
Miami-Dade’s population, the Metropolitan Center has found, is growing primarily because of those who come here from elsewhere and the increase of population due to births over deaths, because the influx from Europe, Latin America and the North is more than offsetting the outflow of Miami-Dade residents who are moving elsewhere.
That influx from abroad is particularly visible in fast-growing Doral, which grew 26.1% so far this decade, Dr. Ilcheva said. She speaks of “the silent population” – the people who do not have stable jobs, who invest, get temporary work permits yet may not be here over a long period of time. That same pattern, she said, is visible in downtown Miami, Brickell and Coconut Grove – all in the fast-growing City of Miami, which grew 13.1% so far this decade and 2.9% in just the past year.
Surprisingly, the county’s second-fastest growth in the decade was in West Miami, which grew in population 24.6% so far this decade and 7.4% in the past year to 7,459 residents. Next was North Bay Village, increasing 15.3% to 8,262 residents.
Both the City of Miami and Bal Harbour grew 13.1%, though the scale is somewhat different – Miami now has 453,579 residents and Bal Harbour 3,050.
The next-fastest growth this decade has been in Homestead, where population has escalated from 60,512 to 67,996, an 11.8% gain. The only other double-digit municipal growth in the county has been Cutler Bay, which has grown 10.5% in the decade to 44,707 residents.
Both Doral and Coral Gables have been seeking seats on the county’s Transportation Planning Organization, which requires a 50,000-population total for eligibility. While Doral’s 57,947 total is comfortably above the line, Coral Gables lost two-tenths of a percent of its population in the past year to 50,815, which may be too close for comfort in its quest for a seat at the table.
While Miami-Dade has significant growth this decade at 8.2%, at the municipal level, Dr. Ilcheva noted, most of the fast-growing cities in the state are on the West Coast – where Fort Myers grew 23.6% and Bonita Springs 23% – and in Central Florida, where Kissimmee grew 16.2%, Orlando 15.7%, Winter Garden 20.2%, St. Cloud 27.6%, Ocoee 24.7% and Apopka 17.9%
She attributes that growth to generally better housing affordability and more jobs creating good wages. Those two factors, she said, tend to attract more domestic migration.