Advertisement
The Newspaper for the Future of Miami
Connect with us:
Front Page » Real Estate » Despite 9,000 new units, Miami rental apartments demand soars

Written by Marilyn Bowden on May 16, 2017
Advertisement 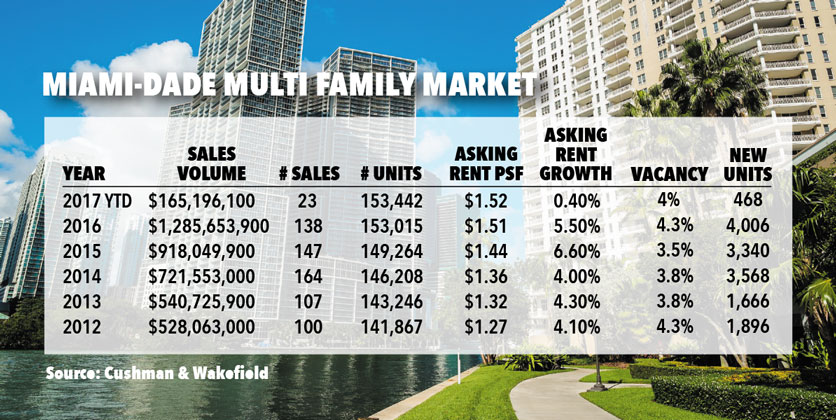 Demand for rental apartments is increasing in South Florida despite the opening of more than 9,000 new units in 2016, according to a first quarter market update from Cushman & Wakefield’s Multifamily Investment South Florida Team – a dynamic that continues to draw investor interest.
Record apartment sales in the region were recorded for the second consecutive year in 2016, the report shows, with the sale of 278 properties valued at an estimated $3.6 billion, and “in contrast to other real estate assets, there is no indication that the current cycle in multifamily has reached its peak in volume.
“We are now entering the eighth year of multifamily expansion in South Florida,” Cushman & Wakefield predicts. “Fundamentals remain strong and growth will continue, albeit not at the feverish levels witnessed in previous years.”
The high demand for rentals is upheld by a number of factors.
High on that list is population growth. The company’s analysts estimate that over the next five years South Florida’s population will grow by 7.5%, or 503,260 new arrivals – a significant rise over the 333,000 arriving over the previous five. While 30,093 new apartment units hit the market in the past five years – one unit for every 11 new residents – using the same ratio, Cushman & Wakefield projects a need over the next five years for 45,000 new rentals to keep pace.
“There are currently 17,652 units under construction,” the company reports, but due to higher construction and land costs, that new supply is almost exclusively Class A+ product. Affordable Class B and C supply, the team notes, remains “drastically underserved.”
Contributing to the demand for more rentals is the area’s current home ownership rate of only 62.1%, approaching a 30-year low. While rental rates were at record levels across South Florida in 2016 for the sixth year in a row – increasing 27.4% in Miami-Dade since 2011 – Cushman & Wakefield notes that escalation in the cost of single-family homes is even higher.
In the past five years, the report states, median single-family home prices have increased 83% in Miami-Dade, “making ownership even tougher and rental demand stronger.”
The reported median home value in Miami-Dade is now more than $330,000, “meaning a renter who could afford a 10% down payment on a median-priced home would have a mortgage around $2,000 – $700 more than the average Miami-Dade rental.”
In 2016, the median salary income increased by 3.6% across South Florida, and about 3.2% in Miami-Dade. That’s the second highest increase in a decade, Cushman & Wakefield reports – a trend that, if it continues, “will help South Florida rents become more affordable.”
The shadow rental market created by new condos bought as income-producing properties has in the past provided some relief for pent-up rental demand.
The first-quarter ISG World Miami Report from International Sales Group, which details condo construction activity over the past five years, shows that in most markets across the region absorption of new condos is high.
In the North Miami Beach-Key Biscayne-Coconut Grove market, for example, ISG reports that 1,282 units have been absorbed out of 1,467 delivered since mid-2011; in Brickell-Miami River, 5,120 units of a total 5,908 have been sold.
Cushman & Wakefield predicts that even though condo units offered for rent will probably be leased in short order, the impact on rents will be negligible, and “any softening in the market is more likely to occur in the condo resale market as investors realize the prospect of renting their condo at a profit is marginal and decide to sell.”
Investment activity in Miami-Dade has resulted in triple-digit sales volumes over the past five years, according to data from the Cushman & Wakefield team, with 138 multifamily properties trading in 2016, generating revenue of more than $1.2 billion as asking rents rose 4.6% to $1.51 a square foot.
However, investor focus is drifting away from new supply, which is Class A and urban.
“With cap rates at or near historic lows,” the team notes, “investors are increasingly focused on cash returns, favoring markets with stronger rental growth outlooks and properties offering immediate cash flow. This means a near-term investor shift away from the major urban metro areas where multifamily deliveries are peaking.
“Value-add class B and C properties remain in strong demand among investors, and competition for these acquisition opportunities remains fierce.”