Advertisement
The Newspaper for the Future of Miami
Connect with us:
Front Page » Top Stories » Visiting Japanese Fulbright alumni talk of common issues

Written by Camila Cepero on May 9, 2017
Advertisement 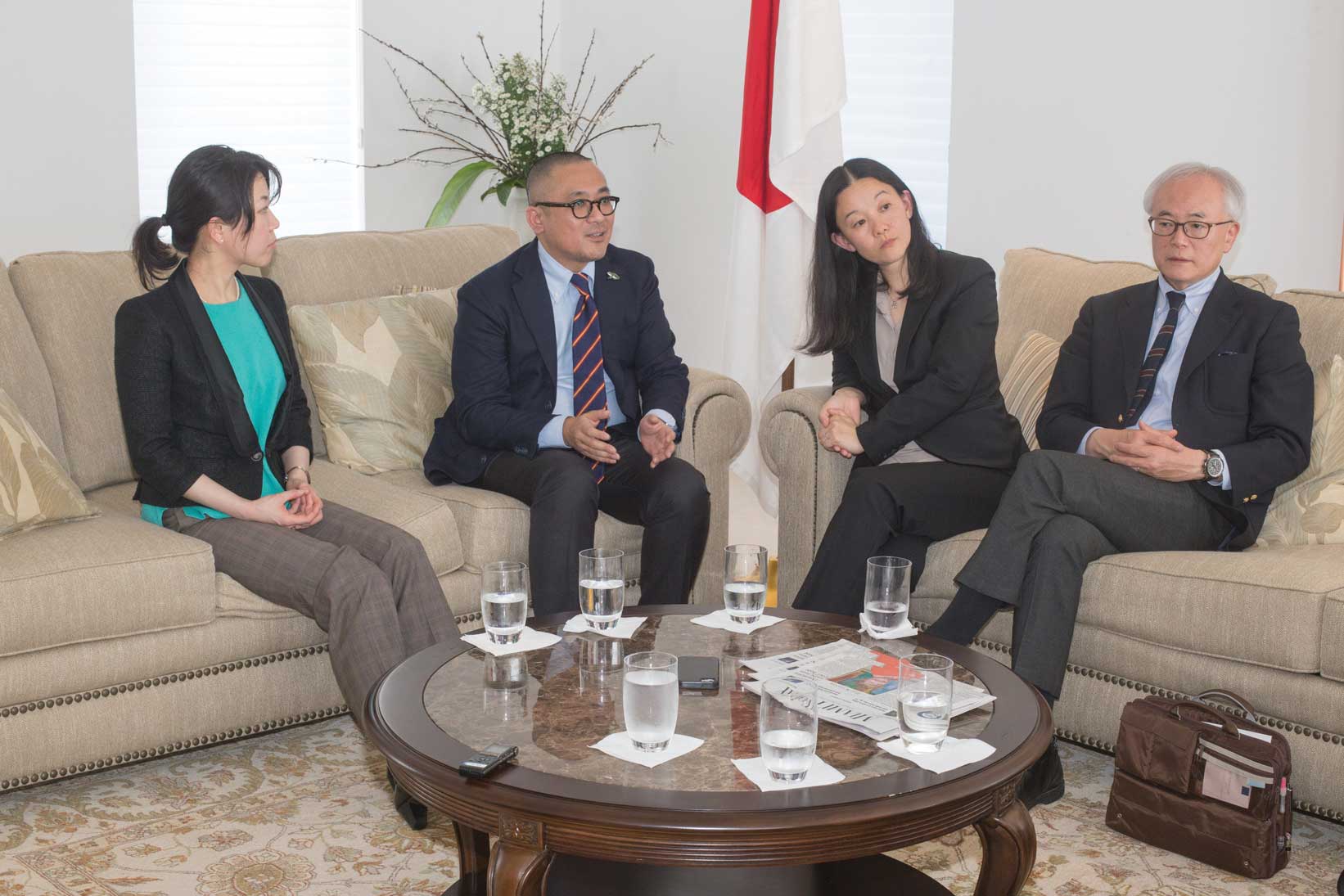 Across societies around the world, national and local governments are facing at least some of the same grand-scale issues. Climate change, sea level rise, international business development and women’s empowerment are just a few examples of the similarities to tackle across borders, said one group of visiting Japanese Fulbright alumni.
Four Fulbright alumni returned to the US to give updates on Japan’s situation and shared their thoughts and views with Miami Today about how Japan and the US can work together to deal with emerging issues.
Regarding business development between Japanese and American companies, it’s important to note that Japan is “not a place to make things,” said Tomohiko Taniguchi, professor at Keio University’s Graduate School of System Design and Management, focusing on international political economy and Japanese diplomacy.
“The cost of labor is not cheap in Japan, but you’ve got brain power and money, so you have to tap into those resources,” said Mr. Taniguchi, who is also special adviser to Prime Minister Shinzo Abe’s cabinet.
Apple’s recent opening of a massive research and development center near Tokyo is an example of that, he said.
Nonetheless, the strong connections between the US and Japan date back 150 years, Mr. Taniguchi said, and he recommends that industries “don’t worry, just come.”
Masaru Karube, an associate professor of the Institute of Innovation Research at Hitotsubashi University and a member of the university’s Center for Japanese Business Studies, said that the framework is already in place for both countries to do business with each other.
Giant companies like Boeing, Tesla and Panasonic already have a presence in Japan, taking advantage of the technological advancements taking place in Japan.
“We have already constructed that relationship,” Mr. Karube said. “In the short term, people may have different opinions, but in the long run, everyone can reach the same conclusion.
In regard to climate change, a global issue that both Japan and Miami are working to combat, Mr. Taniguchi said that “Japan is after all an island nation surrounded by seas, so anything that happens in the seas must concern the Japanese.”
“Sea level going up is one of the greatest concerns in Miami and it reminds me of our similar concerns,” he said. “For tackling climate change, Tokyo is a good reliable partner.”
Ayako Hirata, project-based associate professor of law and society at the Kyoto University Graduate School of Global Environmental Studies, said that Japan’s national and local governments are working hard to deal with and prevent further global warming.
“The framework is still a big agenda item – it’s not specific enough in terms of implementing ordinances in an effective way,” Dr. Hirata said. “And, of course, businesses are worried about the new regulations and that they may hinder economic growth, so there are every intense negotiations happening, especially at the national level.”
“Industries are very cooperative, but the next target is individual households, which is a lot tougher,” he said.
Mr. Taniguchi said that “the biggest emitters in any country… are the chemical industry, steel mills and automobiles.”
“You can give big companies economic incentives to reduce emissions, and that has been going on for some time, and cars in Japan have been rather well known for being fuel efficient,” he said. “Technology can make a huge difference… but the first thing one has to have is a positive attitude toward the future.”
Japan is now moving in the direction of empowering women to join the labor force and pursue careers. The trend is coming to the forefront of the country’s attention because of its possible economic impacts, said Renge Jibu, visiting fellow at Showa Women’s University and journalist.
“If only left-sided people talk about this kind of issue, our society will not change,” Ms. Jibu said. “We need to involve ordinary people and the business community.”
Since 2008, Japan has been seeing a decrease in its population. The business community is expecting a future labor shortage and shrinking market. Prime Minister Abe has stressed in multiple speeches the seriousness of the crisis and is regarded as one of the reasons that women’s empowerment is now seen as an economic issue.
“In [the US] if you ask women, some want to be like Barbara Bush or Nancy Reagan,” Mr. Taniguchi said, “but the economic imperatives have made it impossible – you need to have two sources of income – it’s not a matter of choice.”
Ms. Jibu said that Japan is now experiencing something similar to what she observed as a scholar in the US a decade ago when she interviewed over 50 working women.
“Almost all American women told me that the reason they kept working was because of money. They just couldn’t quit, they had no choice. I returned to Tokyo in 2007 and at the time there seemed to be some choice, but after [the financial crisis in] 2008, there also seemed to be no choice in Japan,” Ms. Jibu said.
“What Japan is experiencing today is what the US experienced before, so Japan can learn from the US.”
Overall, Mr. Taniguchi said, the most important thing to keep in mind is that both countries have to embrace changes, embrace differences and embrace growing diversity.
“And that’s already occurring.”