Advertisement
The Newspaper for the Future of Miami
Connect with us:
Front Page » Real Estate » Knight Convention Center deal could upgrade downtown waterfront 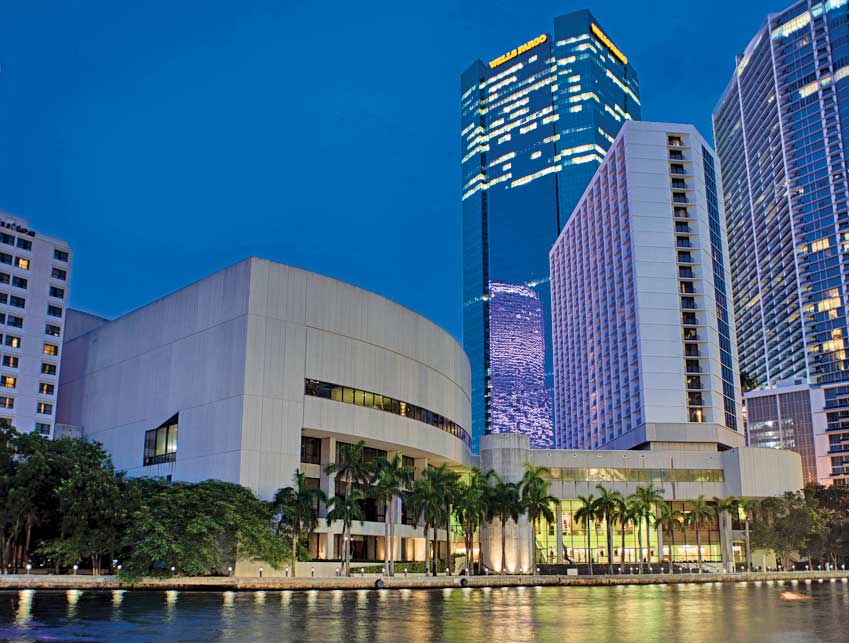 Redevelopment of the city-owned James L. Knight Convention Center and attached neighboring hotel at 400 SE Second Ave. could see a rebirth of a prime waterfront site in the heart of downtown Miami.
That’s the feeling of city commissioners who voiced approval of administrative staff’s continuing negotiations for a new long-term lease of the high-profile property, adjacent to a city park and city dockage on the Miami River.
Commissioner Ken Russell called the area a “tremendous place” on the river with next door access to the Metromover and historic Fort Dallas Park.
Redevelopment of that entire stretch, with revived water taxi service, could see the area become a hub of activity downtown, said Mr. Russell.
There was no vote; a formal resolution may be presented this month.
On April 27, commissioners discussed a proposed memorandum of understanding to be executed by the city manager between the city and Hyatt Equities LLC to negotiate an amended land lease between the city and Hyatt. The new deal would require Hyatt to redevelop the site.
Whatever happens at the site will likely have to be approved by city voters, because it would be committing public waterfront property to a long-term use, triggering a required referendum.
The value and potential of the site are enormous.
“It’s a tremendous asset,” said Mr. Russell. “If it’s razed and we start from scratch, we have a blank canvas … I agree that an ongoing maintenance agreement is needed, but the real story is, what do we want to do with this asset going forward?”
The convention center and hotel were considered a “money pit” by city officials for years. It wasn’t that long ago that the city was considering selling the entire property, which includes the James L. Knight Center, the attached Hyatt Regency hotel, and a 1,450-space Knight Center parking garage that is the base of the privately-owned Miami Tower across the street.
Mr. Russell wondered why there isn’t a master plan for the site, including the park.
Daniel Rotenberg, head of the Department of Real Estate and Asset Management, said the renegotiated lease calls for a master plan from Hyatt, to be approved by the city. The new deal could also include the neighboring park, he said.
The city owns Fort Dallas Park next door at 60-64 SE Fourth St.
Two buildings occupy the site on the north bank of the river sandwiched between the hotel-convention center and the county’s Riverwalk Metromover station. They include a gutted and dilapidated former restaurant and The Flagler Worker’s House, also known as Palm Cottage, the last known building in Miami directly associated with railroad magnate and developer Henry M. Flagler.
For many years, a seafood restaurant, Bijan’s, operated from the commercial building under a lease with the city. Litigation and allegations of unpaid rent ensued and the eatery eventually shut down.
For the most part, the waterfront site has been blocked off and forgotten for several years.
A background memo on the ongoing negotiations says the city and Hyatt desire a restated lease that will extend the term to total 99 years, expand the leased premises to include the convention center, amend the parking agreement, and require Hyatt to redevelop the site.
The Knight Center has 34 meeting rooms, including a 444-seat auditorium, a 117-seat lecture hall, a 4,650-seat theater and is connected to the Hyatt Regency Miami offering more than 600 hotel rooms and additional meeting space.
Commissioners agreed the property has seen better days and is deteriorated.
At the April 27 meeting, commissioners also discussed disputes between the city and Hyatt over maintenance and repairs.
Commissioners asked if there was a settlement of a lawsuit over the items. Mr. Rotenberg said there is no lawsuit; however, the city has worked out a settlement with Hyatt to cover disputed costs associated with repairs.
Commissioner Frank Carollo mentioned several times his recollection that commissioners had approved money for repairs, and he asked repeatedly why the work was never done.
“We put in capital for repairs … why didn’t we do it?” Mr. Carollo asked over and over, with no answer provided.
Mr. Rotenberg said from Hyatt’s perspective there was more than one major repair.
Mr. Carollo asked if a lack of communication contributed to these disputes.
Mr. Rotenberg responded that the last decade with Hyatt has been “a bumpy road.”
Mr. Russell said he met with Hyatt representatives and explained the company wants to manage the convention center, along with the hotel, but it wants a longer commitment before redeveloping the site.
Commissioner Francis Suarez said the city is at a crossroads with a very valuable asset. He said in its heyday the property was beautiful, but that’s not the case today. And he said the off-site parking, in another building, is dysfunctional.
“If it is redeveloped, it should have its own parking facility,” said Mr. Suarez of the hotel and convention center.