Advertisement
The Newspaper for the Future of Miami
Connect with us:
Front Page » Government » County analyzes four expansions for Metromover 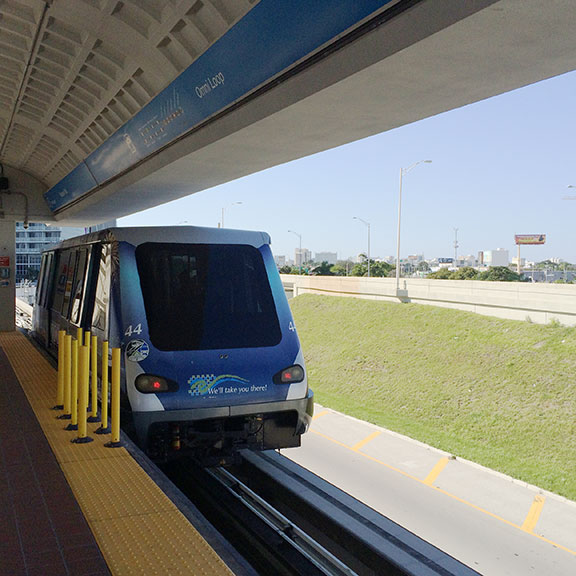 County transit officials are analyzing extensions for the Metromover and upgrades for all its systems toward accommodating increasing ridership.
Director of Transportation and Public Works Alice Bravo said right now her department is evaluating various expansions, including one to the north for the Midtown area; the south to close the Brickell loop; the west for the Marlins Stadium area; and Miami Beach over the MacArthur Causeway to Fifth Street and Alton Road that would serve as a beach corridor.
In the interim, Ms. Bravo said, the department is working on a procurement package to upgrade all Metromover systems such as computers and electronics. The free transportation service, also called the peoplemover, has all its original systems, which Ms. Bravo said limits the county’s ability to add any new vehicles.
Metromover ridership is going up, she told the Feb. 16 Transportation and Public Works Committee meeting, rising over 4% from just a year ago. Chair Bruno Barreiro noted that’s the largest increase in ridership for the county’s mass transit system and “that will continue, so we have to make sure it’s adequate.”
The latest statistics on the department’s website show Metromover’s November ridership at 841,679, up 1.6% from November 2015. In the same month, Metrobus ridership was 5,181,524, down 5.5% from November 2015, and Metrorail ridership was 1,734,267, down 1.6% from November 2015.
Metromover’s ridership in October 2016, however, was down 9.4% from October 2015 and in September it was down 1.3% from September 2015, the county’s figures show.
Mr. Barreiro placed the Metromover system’s expansion on the agenda as a discussion item, saying the Metromover is “near and dear to his heart” as well as to the county’s economy. “We have to make sure that our urban area really functions properly.”
Committee members asked if the Metromover cars, once upgraded, might be used in some way for the Strategic Miami Rapid Transit Area (SMART) plan, given how expensive the estimated cost is for six corridors.
“For the SMART plan, we have to be smart about implementing it,” said Dennis Moss. “While I want to expand [the Metromover], I want to be mindful of the main line and that we must be creative about how to fund things.”
Mr. Moss asked if the infrastructure in place now could be upgraded to go to Miami Beach, for example. “Would it be feasible to run at the speed necessary?”
The pacing has to do with spacing of stations and the number of stops, Ms. Bravo said. Basically, she explained, it’s possible for the vehicles to travel at 30 miles per hour or more, so one could travel from Midtown to the Beach.
However, Ms. Bravo said, what the department is particularly looking at now is how the trains would operate. For example, she said, if a person boards at Government Center and is going to Miami Beach, it might be better to skip some stops.
Everything having to do with transportation is interrelated, Ms. Bravo agreed. The other municipalities and agencies such as Miami’s Downtown Development Authority are focused on the SMART plan, as it all has to do with the county’s economy and future growth.