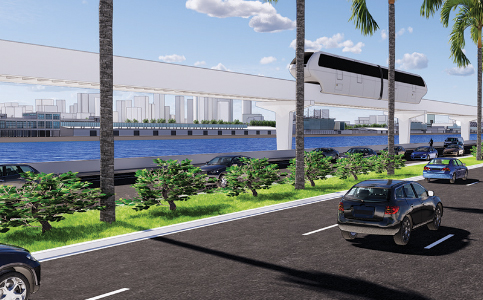 The failed motion had urged the county and Transportation Planning Organization (TPO) to ensure that the Beach Corridor of the six-corridor rapid transit Smart Plan is built differently to maximize ridership.

The current aim is an Elevated Automated Rail Transit (monorail) as the preferred mainland-beach link via the MacArthur Causeway. The transit mix, set after a project development and environment study was released in January 2020, includes an extended Omni Loop of the Metromover to Midtown and the Design District, a bay crossing via a new monorail, and bus and trolley via Washington Avenue to the Miami Beach Convention Center.

Last week’s meeting put that combination in question but finally rejected a call to urge that the project “is developed in a manner that maximizes ridership potential and cost-effectiveness by pursuing a technology and route that provides a direct connection between Metrorail and Miami Beach without the need for a transfer.”

The current plan doesn’t connect without transfers, so the resolution would have asked authorities to explore other options.

“I can tell you that this will not make anyone more likely to use transit across our bay,” said Kevin Amézaga, Miami Riders Alliance executive director, about the monorail. “Fiscally, it doesn’t make any sense from a transit rider perspective, [and] more transfers don’t get people out of their cars onto transit.”

But county Transportation and Public Works Director Eulois Cleckley defended the current mixed-mode plan as the “best opportunity to deliver this connection between mainland downtown Miami to the beach.”

Eileen Higgins, county transportation committee chair, also defended the monorail alternative. She argued that the Smart Plan needs to be seen as an entire system and not as separate corridors.

“We need to look at every decision about how does it affect the whole system, not how does it affect one corridor,” Commissioner Higgins said. “We put together a 40-year horizon on what we’ll be able to afford, and we fit those six corridors into all of that funding model so we don’t run out of money by building one perfect corridor and then no other corridors get built.”

The project received only one bid, for Malaysian casino giant Genting and partners to develop a monorail in a P3 deal with the county. “I keep going back to the fact that we actually have a P3 partner that’s willing to deliver a connection that is consistent with the LPA [local public agency],” Mr. Cleckley said.

If the county partners with the private sector, no federal funds would be needed, which would significantly reduce time to complete the corridor, Ms. Higgins said. Obtaining federal funds to develop a project of this size, she said, could take five to eight years while the Federal Transit Agency (FTA) rates the project and later allocates the funds.

“The idea of taking a step back, going back to the TPO, starting over for an LPA, transferring it from a P3 to an FTA new starts, delays transit on this particular corridor for maybe eight years, possibly 10 or 15 years,” she said.

Transportation trust member Robert Wolfarth said not a lot of companies are looking to invest in the Smart Plan and the county should feel lucky that a company is interested in doing so. “I’m really happy to hear that we could possibly be breaking ground in about 18 months,” he said.
“I think that we should really move forward with what we’re doing here,” Mr. Wolfarth said. “It’s not a perfect system, but it gets people moving around onto the beach and to the mainland.”

“The reality is, we have a great possible solution that will save our workforce upwards of a half an hour each way getting to and from their jobs on Miami Beach at a cost that’s affordable,” Ms. Higgins said.

“The process has been fair, we have continued to evaluate this and make sure that the taxpayers are getting the best use out of the funds, and we feel that this is the best opportunity to leverage other people’s money to not only move the project but also [to] allow the freeing up of those funds to advance the other corridors that are so important to the county,” Mr. Cleckley said, “so that’s our position and, again, we’re going to continue to move forward on this.”