Advertisement
The Newspaper for the Future of Miami
Connect with us:
Front Page » Real Estate » 78-story mixed-use tower to replace Brickell’s Burger King 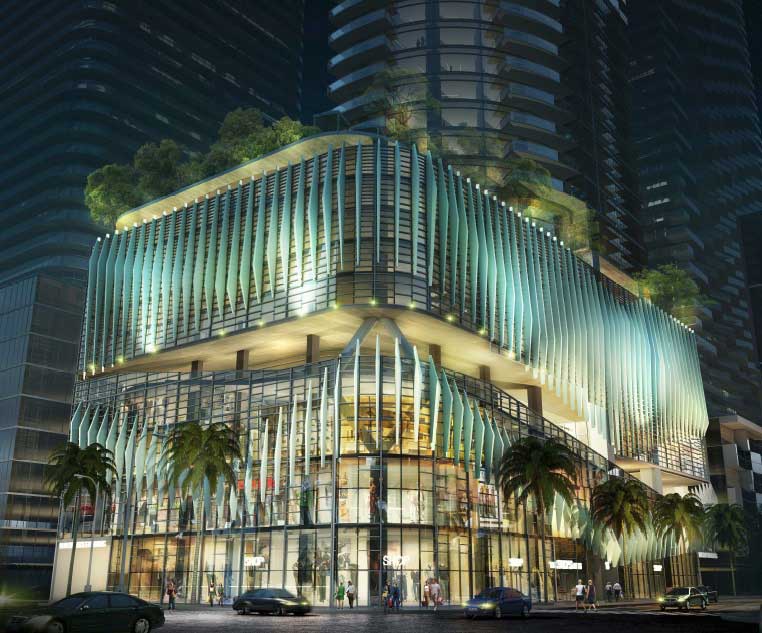 From Burger King to a real whopper, a developer plans a 78-story mixed-use tower on a Brickell area corner that’s been serving up burgers and fries for years.
On the southwest corner of Southwest Eighth Street and South Miami Avenue, City Center Properties LLC plans the 950-foot tower, to be called simply 18. It will host 392 luxury condos anchored by four floors of retail – 66,618 square feet of stores.
The shape-shifting tower inspired by a flower bed comes from architects Nichols Brosch Wurst Wolfe & Associates Inc. The city’s Urban Development Review Board on Feb. 15 recommended approval and offered high praise for the design.
The tower will replace a Burger King and other commercial buildings at 10 SW Eighth St., across from the sweeping Brickell City Centre’s condos, offices, hotels, restaurants and multi-level open-air shopping center.
Ongoing construction of SLS Lux, Brickell Heights and Solitair Brickell also hugs the site.
Steve Wernick, an attorney for the developer, called the site unique in the center of Brickell and “the heart of growth and evolution in the city.”
He also referred to the property as “the last corner” and “a key piece” to a booming Brickell.
The slender tower rising from a podium will be consistent with the character of the evolving neighborhood, said Mr. Wernick.
He said the project will be bright, vibrant and very pedestrian-oriented.
“This is a very special site – very unique,” said architect Igor Reyes.
While showing the review board a video of the project, Mr. Reyes said it will be “definitely a happening place.”
The tower, Mr. Reyes said, has a bent, playful feeling. It’s built around a curve, he said, not unlike the growth of a flower.
Total estimated floor area is 923,000 square feet. Parking to accommodate about 464 vehicles and 40 bicycles will be above the retail floors, said Mr. Reyes.
While most garages employ the tight turn, spiral staircase-like entrance and exit ramps, he said, 18 is designed so vehicles travel a ramp on the outer edge of the podium or base that brings them to the fifth floor after one 360-degree turn.
“It is much more efficient,” Mr. Reyes said.
This also helped inspire the podium’s façade, he explained, showing curves and fins of different shapes and sizes. It sets the stage for the tower, he said, and gives the impression of a “crumbling” plane “like the tower is crushing it from above.”
In a letter to the city, Mr. Wernick described the property as an under-utilized one-story retail shopping plaza with surface parking abutting both Southwest Eighth Street and South Miami Avenue. Tenants included Burger King, La Sandwicherie and Chandi Liquors.
“While the shopping plaza is active and has served the area for many years, the buildings do not engage the pedestrian or respond to the evolving urban form under Miami 21 [zoning code],” he wrote.
“The property is one of the last remaining key redevelopment sites in the heart of what is quickly becoming the most dynamic, diverse and pedestrian and transit-oriented neighborhoods in all of South Florida,” he wrote. “The property is literally surrounded on all sides by new high-rise projects, which are either currently under construction or recently completed.”