Advertisement
The Newspaper for the Future of Miami
Connect with us:
Front Page » Arts & Culture » Murals key to mixed-use project for Edgewater 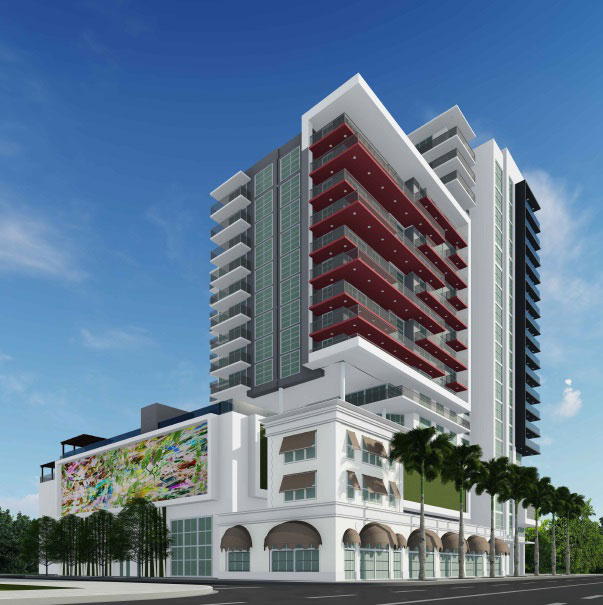 A Manhattan-born artist now living and working in Miami has been hired to create large colorful murals as a key to a rising mixed-use project in the heart of Edgewater.

The project was approved in 2015 and steady construction has topped off the new building, which stands 218 feet, 2 inches tall.

When the city’s Urban Development Review Board recommended approval in March 2015, one condition required the developer to return to the board for review and recommendation about the art wall for the north and south sides of the new podium, which is the 271-space parking garage.

At its November meeting, the board recommended approval by the planning director of the artwork, with conditions.

The site is home to the one-story retail building that was tied to a three-story residential building called Wolpert Apartments. They were built at different times in the 1920s.

The project is to have 166 residences, additional ground floor retail and the garage.

Examples of the planned paintings were presented at the meeting by attorney Iris Escarra, who introduced the artist, Magnus Sodamin.

The design has an art wall on the north and south, and a planned living green wall on the east elevation that faces Biscayne Boulevard.

In a presentation to the board, the developer says Mr. Sodamin uses an expanded painting practice “that is at once hallucinatory and precise, employing a variety of techniques to blur the frontier between abstraction and landscape painting.”

Mr. Sodamin told the board he uses many processes to create his art. He said he gets his inspiration from nature and fauna, and through his art he hopes to bring beauty into people’s lives.

Mr. Sodamin said for the 2500 Biscayne project he will work on-site on the art walls, which will basically be paint over stucco and would not be lighted.

A board member asked about the long-term maintenance of the art wall: would it survive the elements for years?

Mr. Sodamin said the artwork will be coated with a sealant to protect it from the elements.

Ms. Escarra said the residential mixed-use project will be a rental, managed by one entity, and they expect to have a longevity plan for the art walls.

Site plans show the relationship with planned landscaping around the project, and board member Gerald Marston asked about the trees required. Ms. Escarra said the developer must plant trees every 30 feet.

There was some concern about the trees blocking views of the artwork.

“I have a problem with the art,” said acting board chairman Neil Hall, citing two reasons: the location of the trees and the lack of lights.

“I’d want it to be seen. It is an art piece,” Mr. Hall said, suggesting the developer and artist reconsider lights for the art walls.

Mr. Sodamin said he agreed on lighting for the art, and said they have been discussing that option.

Mr. Hall said he also had a problem with the proposed green wall on the Biscayne Boulevard side.

“I would have loved art there,” he said, suggesting the developer consider replacing the green wall with an art wall.

Mr. Sodamin also agreed on this point. “I do think Biscayne needs more of this,” he said. While the Wynwood Arts District is “oversaturated,” the growing Edgewater neighborhood could use more color and art to strengthen the look of the area, he said.

Mr. Marston said he was considering making a motion to recommend approval of the art walls, with a condition the developer consider an art treatment on the Biscayne side.

Ms. Escarra said there would be a problem with that because the city’s Historic and Environmental Preservation Board required a covenant from the developer calling for the green wall on the east.

Mr. Marston recommended the developer “try again” with the historic board to allow an art wall instead of the plain green wall for Biscayne Boulevard.

The review board recommended approval of the art walls with conditions directing the developer to try to add art on the east side, plant trees in a type and spacing to afford maximum visibility of the art, and consider adding up-lighting and down-turned lighting to the art walls for variety of visuals.

For this project, Mr. Marston suggested the developer plant palms instead of shade trees if the city will allow it.

2 Responses to Murals key to mixed-use project for Edgewater