Advertisement
The Newspaper for the Future of Miami
Connect with us:
Front Page » Arts & Culture » Institute of Contemporary Art Miami’s new home nears use 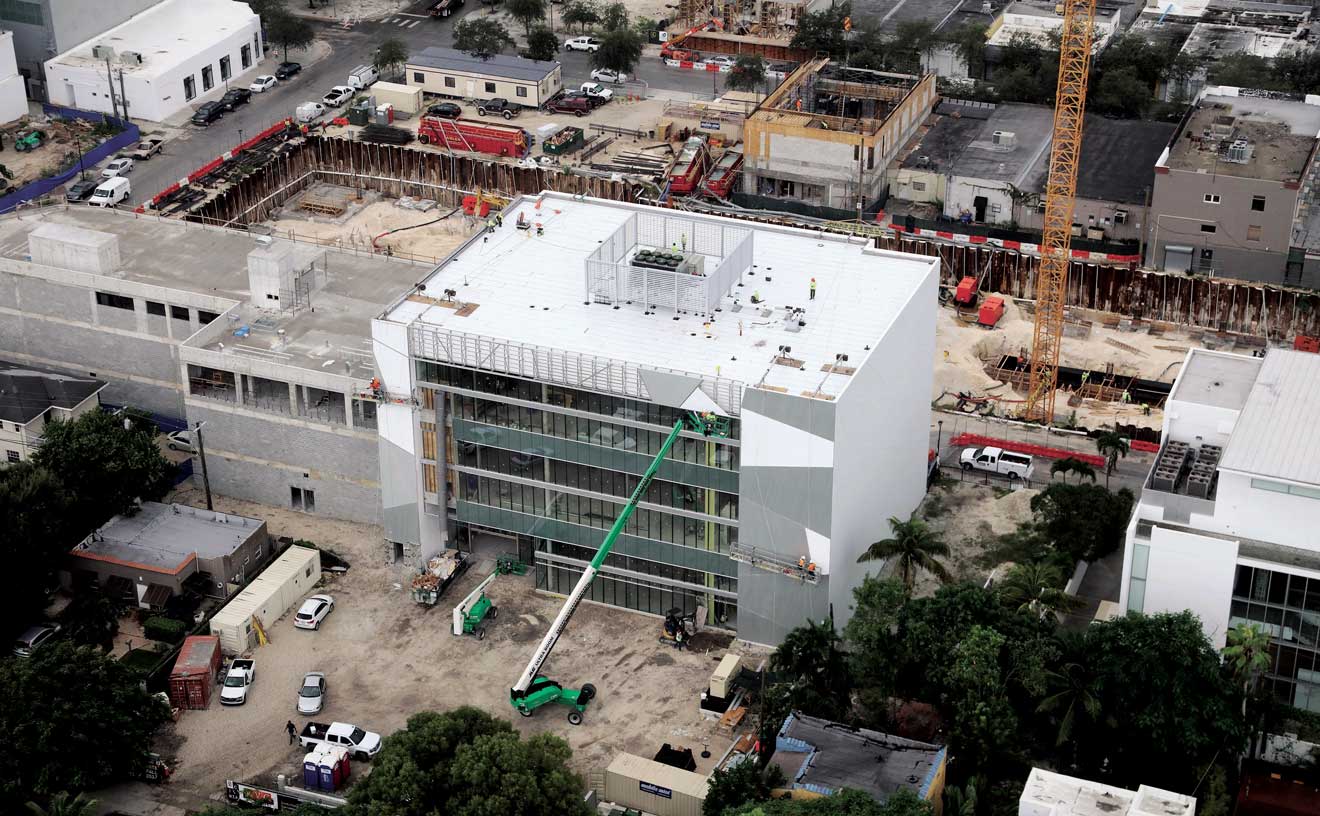 Although it’s only been one year since groundbreaking, the Institute of Contemporary Art Miami’s new permanent 37,500-square-foot Design District home is about to start seeing the end of construction as the museum prepares for the opening of a final exhibition in its temporary space.

The museum’s main structural components were finished over the summer, meaning that the building’s foundation, walls and most exterior structures have been completed.

Since then, contractors have continued to work on the exterior façades as well as the smaller but essential components of the building like wiring and plumbing, said Ellen Salpeter, director of the Institute of Contemporary Art Miami.

The southern façade, which will serve as the main entrance to the museum, will feature a geometric design of interlocking metal triangles and color-changing lighting panels. The northern façade contrasts the entrance with windows that will bring natural light into the museum.

The museum’s 15,000-square-foot sculpture garden is also wrapping up.

The new building is to feature more than 20,000 square feet of exhibition galleries, which are being framed in the internal space right now, Ms. Salpeter said.

“We are opening to the public in about a year,” she said, “but we haven’t announced a firm date or opening program.”

The new building’s highlights include exhibition space and the sculpture garden on Northeast 41st Street. Inside the building will be multi-purpose areas along with gallery spaces, all of which are to feature state-of-the-art acoustic and lighting technologies.

The building’s design was the first US project for Spanish architecture firm Aranguren & Gallegos Arquitectos, which worked in collaboration with local firm Wolfberg Alvarez & Partners.

Visitors inside the museum will have views of the Design District and the sculpture garden, which will have the feeling of flowing into the ground-level galleries.

The design, construction and land acquisition have been entirely funded by a major capital gift from Irma and Norman Braman, the auto dealership magnate.

Throughout the construction of the new building, the Institute of Contemporary Art Miami has focused its operations in its temporary location in the Moore Building at 4040 NE Second Ave.

Now, as the end of construction nears, the museum prepares for the opening of its final exhibition at the temporary space to coincide with Miami Art Week.

“One Day on Success Street,” a collection of work by German artist Thomas Bayrle, will open Nov. 29. It will be the first American museum presentation dedicated to the artist.

According to the museum, the exhibition traces Bayrle’s profound observations of human civilization – particularly through developments in technology and our environments – over the course of his nearly 50-year career and across a range of mediums.

A centerpiece of the exhibition will be Wire Madonna, a newly commissioned site-specific installation created for the Institute of Contemporary Art Miami’s Atrium Gallery in the Moore Building that sees the artist interpreting the icon of Madonna and Child in steel, marking the artist’s largest sculpture to date.

That last exhibition will run through early spring and close in late March, at which point the museum “will go dark,” Ms. Salpeter said.

Although the museum will keep running most of its other programming, such as its educational and outreach programming and its recently launched Art + Research Center, anything on the exhibition front will end with the closing of the Bayrle show.

The museum will remain free to the public – just as it is now – when it moves into the new building, Ms. Salpeter said.