Advertisement
The Newspaper for the Future of Miami
Connect with us:
Front Page » Communities » Population of downtown Miami grows by a third in six years

Population of downtown Miami grows by a third in six years 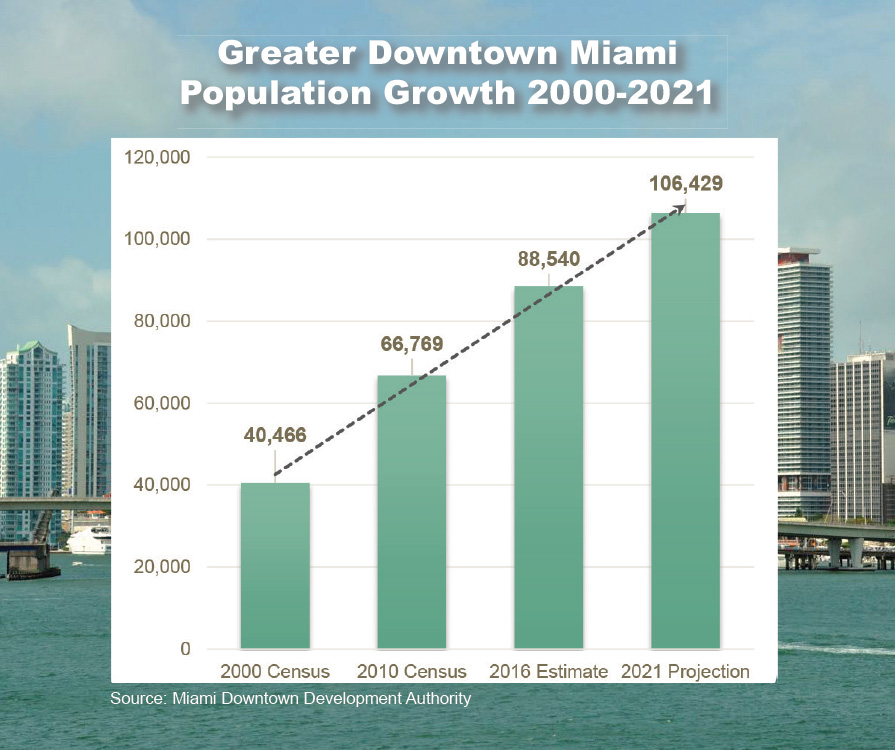 Young professionals are increasingly making their homes in the central business district, says a new report by Miami’s Downtown Development Authority: the population has increased 33% since 2010 “and the majority of the population within downtown Miami are highly educated, young working professionals.” Fully 45% are aged 25-44, and more than 50% hold a college degree, the report says.

For study purposes, the authority defined downtown as a 3.8-square-mile area between Biscayne Bay and I-95 on the east and west, and between the Rickenbacker and Julia Tuttle causeways on the south and north. It includes the central business district, Brickell, the Arts & Entertainment district, Overtown, Wynwood, Midtown and Edgewater.

“Population continues to increase in greater downtown,” the report said. “We estimate the current population at 88,540 and project it will surpass 100,000 in 2021. Greater downtown has added nearly 22,000 people since 2010. The urban core neighborhoods… continue to see remarkable growth and now make up 75% of the greater downtown population. Brickell added the most new residents, increasing from 26,472 to 34,975.”

Throughout the downtown study area, some resident characteristics remain constant, said Nicholas Martinez, who heads the authority’s applied research and analytics department. They tend to be more affluent than other Miami residents, with a median household income of $66,498, as compared to Miami-Dade County’s median of $48,102.

They are more educated: 29% of downtown residents have an undergraduate degree, and another 22% hold graduate degrees. Those figures are 17% and 10% respectively for other Miami-Dade County residents.

The average downtown resident spends $1,600 per month for a one-bedroom apartment and spends as much on technology as on clothing and services ($200 per month for each), Mr. Martinez said, speaking to a Friday meeting of downtown authority directors.

They exercise more: 70% say they exercise weekly, and 26% say they spend more than seven hours a week on exercise. “Adults in downtown enjoy attending a fitness club more often than residents in the City of Miami or Miami-Dade County generally,” the report noted.

They love their pets: 60% of downtown residents have a dog, while a smaller percentage own a cat or a bird.