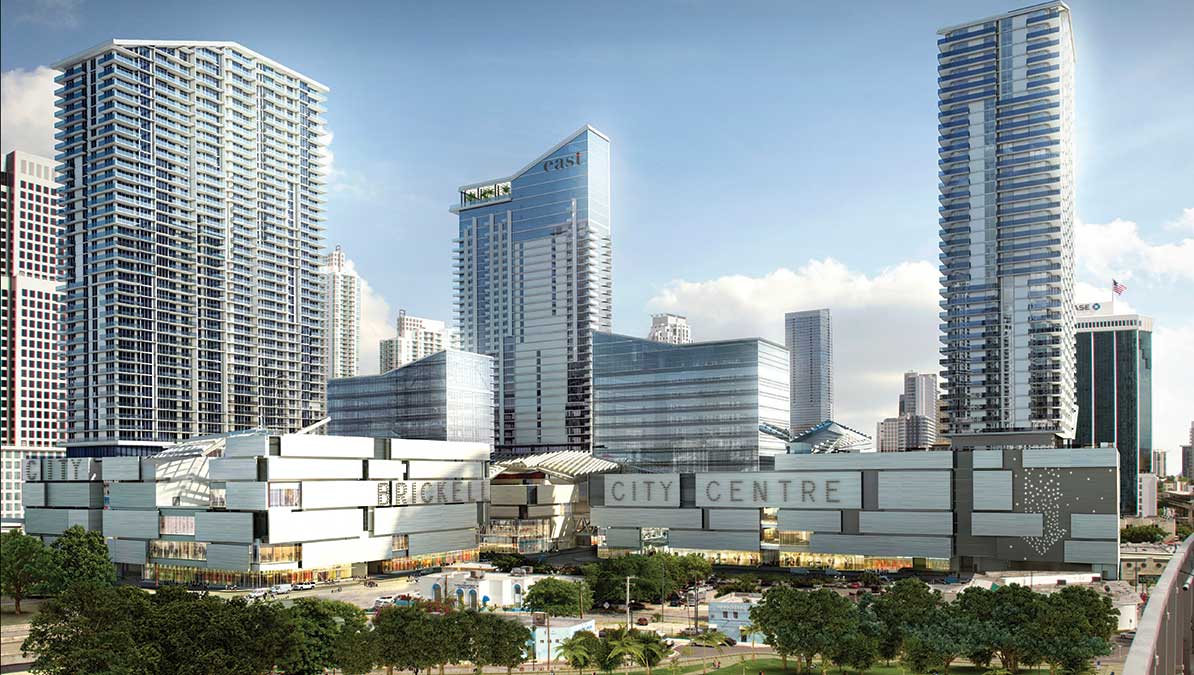 The Nov. 3 opening of Brickell City Centre’s shopping center marks the end of an era as construction comes to an end on Phase I of the 4.9-million-square-foot, mixed-use Swire Properties Inc. development. And though it’s been years in the making, those involved with the project won’t be ready to move on without first tying up every loose end.

Rising in downtown and spanning 9.1 acres along South Miami Avenue between Sixth and Eighth streets, the entire project is expected to offer roughly 5.4 million square feet.

Phase I will be the first in a series of completion milestones in the massive $1.05 billion undertaking that began in June 2012 with the groundbreaking and below-ground construction of the foundation and the underground parking garage.

Phase I alone has introduced:

“When we do innovative efforts, they’re never quite as good as you expect – maybe expectations are too high – but this one so far exceeds my expectations in terms of architectural enhancement and artistic design and its functionality,” said Stephen Owens, president of Swire Properties Inc.

A Miami Metromover stop underwent a $14 million renovation and has been incorporated directly into the development. The stop now exits directly into the shopping center’s third floor. The two-story underground garage traverses streets in the lower level.

The 500,000-square-foot shopping center, created along with retail co-developers Whitman Family Development and Simon Property Group, most recently announced Victoria’s Secret, Bath & Body Works, Suit Supply, Stitched and Pinko. The five tenants raise the number of revealed tenants to more than 80, with at least 20 of those being international brands opening flagships in the US.

The retail center, which can have about 125 “doors,” is “95% leased and committed at this point,” Ms. Overholt said, adding that there are ongoing conversations with possible tenants in all of the remaining spaces. “I doubt we’re going to have anything left by opening.”

“It’s a very strong merchandise mix,” Ms. Overholt said. “Right now, the big push is on construction to get the tenants permitted and well on their way.”

The food and beverage offerings will be situated throughout the third floor, offering a mix of fine dining and casual fare.

The scheduled Nov. 3 opening of the retail center will mark the end of construction for Phase I.

“This is it,” Ms. Overholt said. “Everything else is open and this is the grand finale.”

“We sort of have two thoughts [about the future],” Mr. Owens said. “We need to finish what we have… We still have six months of very significant work to do with the retail tenants into the first quarter of next year. Also, we’re very much believers that the success of the project is how you finish… so our goal over the next six to nine months is to finish strong at Brickell City Centre.”

The 390-unit residential building REACH, completed earlier this year, is 95% closed, with around 120 families already residing there, Mr. Owens said.

The second residential building, RISE, is 50% closed, he said, and one of two mid-rise office towers is 95% leased and occupied, he said.

The development’s 352-room hotel, EAST, Miami opened at the end of May along with its Uruguayan restaurant, Quinto La Huella, and signature rooftop bar, Sugar, which Mr. Owens said are “doing fantastically well and exceeding our greatest expectations.”

“Longer term, there are two additional phases… We have another eight years of work there. We already have all of the approvals for it and we have a long-term commitment to it,” Mr. Owens said.

“There are so many other ancillary benefits and so many other initiatives being taken up… and all of this is playing a part,” he said. “There are so many players in this, which I really think is going to be something so different a decade from now – a kind of urban environment where everyone is not going to be driving cars – and it’s being reinforced by young professionals… Brickell City Centre really has become the transformational project that we envisioned.”