Advertisement
The Newspaper for the Future of Miami
Connect with us:
Front Page » Top Stories » County to seek proposals for its first four electric buses

County to seek proposals for its first four electric buses 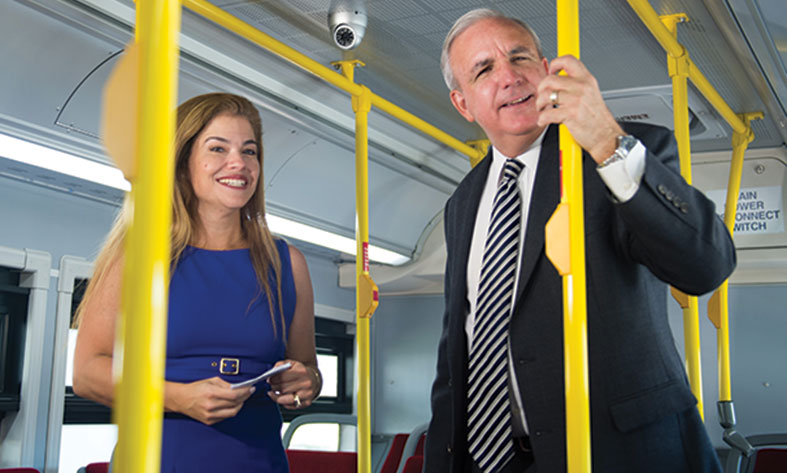 The Miami-Dade Department of Transportation and Public Works will soon seek proposals for its first four electric buses and necessary charging stations with a $2.4 million Federal Transit Administration grant, beginning the process of replacing its aging traditional fleet.

The department plans to buy 30 self-contained 40-foot electric buses initially to start replacing its diesel buses that are past their expected useful life as well as reduce noise and congestion in the county, said Director Alice Bravo. “We’re close to putting out a bid,” she told Miami Today this week.  She estimates procurement could take several months and, adding in the time for county commission approval, said it will probably be about a year or 18 months before the department has 30 electric buses.

Further down the road, Ms. Bravo said, Miami-Dade will look into a larger purchase.

“We’ll get the mechanics trained,” she said.  “There will be a period to let the technology mature.”

The buses cost $800,000 to $950,000 each, Ms. Bravo said, so the $2,357,143 grant the department recently received will purchase at most four buses and accompanying charging centers, which will be at each of the county’s three bus operation centers. The department already has funds from the half cent transportation sales tax for the other 26 electric buses as part of its capital plan.

As Miami Today reported last week, The Federal Transit Administration announced that Miami-Dade was one of 20 transit providers in 13 states to share $55 million for transit buses and related technology that replaces aging diesel buses with battery-electric or fuel-powered vehicles.

The 40-foot electric buses Miami-Dade is buying will replace part of a fleet that now has 70% of its traditional buses operating beyond their expected useful life, the Federal Transit Administration said in a written statement.

Industry standards find a bus beyond its useful life after 12 years of operation, Ms. Bravo said. The self-contained electric buses the department will be buying require a lot less maintenance than the traditional diesels currently in the fleet, she said, so the county will save over a 12-year period.

“The diesel buses require regular maintenance – we have to take the engines apart and change the oil, none of which will be necessary with the electric buses,” Ms. Bravo said.

The electric buses won’t be assigned to a specific route but, rather, will move around, Ms. Bravo said. They will come out of one of the three operation centers in Miami-Dade, she said, and get rotated.

Two companies came to the county and let transit personnel try out some electric buses, Ms. Bravo said. “They ran all day on a heavy route,” she said, adding she estimates the buses Miami-Dade buys will run for 16 hours and travel about 180 miles – basically all day – before needing a charge.

When officials took a ride on one of the buses, Ms. Bravo said, it was like a regular bus ride in many ways. One difference, however, was when she walked up and the engine compartment was open.

“Someone had to tell me it was on because it was absolutely silent,” Ms. Bravo said. “And when we pulled away, there was no sound at all.”

The department took a video of the ride, and Ms. Bravo said she kept asking people to stop talking so anyone who watched the film later could tell there was no noise whatsoever on an electric bus.

She thanks people who use the transit system now and will eventually board the electric buses. “These will make our city streets more pedestrian friendly by cutting down on noise,” Ms. Bravo said. “We appreciate residents using transit and helping to eliminate congestion and helping the environment.”