Advertisement
The Newspaper for the Future of Miami
Connect with us:
Front Page » Real Estate » Megacenter Brickell project advances 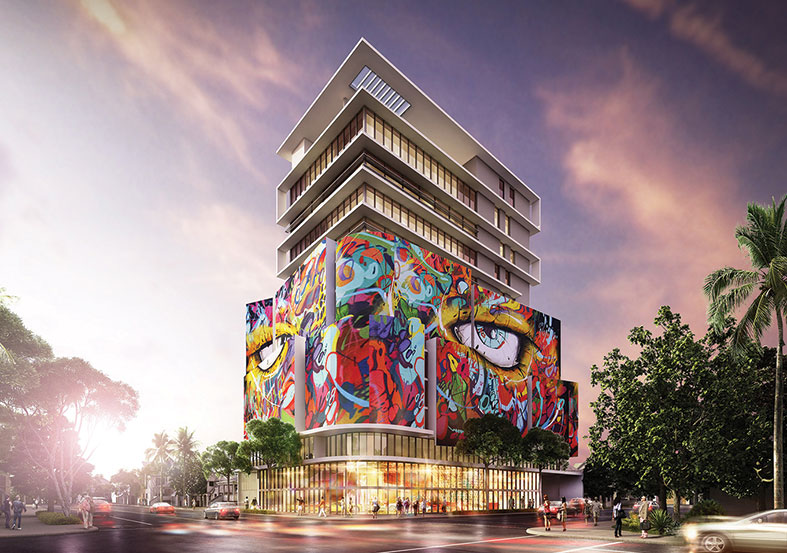 In the shadow of I-95, where Brickell meets East Little Havana, a Chilean developer plans a unique mixed-use project to be called Megacenter Brickell.

The city’s Urban Development Review Board recommended its approval June 15.

The project is to include two buildings at 420 SW Seventh St. and 427 SW Eighth St.

The other building is eight stories with ninth floor rooftop amenities, about 57 residential units and ground-level retail space.

All told, the project would be home to about 10,000 square feet of retail.

The residential units are described as multi-family, workforce rental units and the building faces Calle Ocho or Eighth Street.

The retail, storage and office uses will face Seventh Street, while the residential building will front Eighth, he said.

Adding color and dimension, large panels of artwork will cover the lower floor façade of the 12-story building.

While the artwork will be replaced periodically on the building’s main facades, it will celebrate the evolution of Miami’s art scene, according to Mr. Borges.

The art shown in conceptual images represents the work of several artists, while the main image being shown is the work of ABSTRACT, who operates out of Miami and works internationally.

No official commitment has been made with any artist but Mr. Borges said, “Megacenter U.S. will be working closely with select artists to make this a very special and artful building that celebrates the art culture that Miami is nurturing.”

Mr. Borges described the art walls as temporary, saying the artwork would be rotated.

They plan to “curate the best artwork for this great location,” he said.

The developer is requesting nearly a dozen waivers to the Miami 21 zoning code, including allowing a 30% reduction in required parking, a 10% reduction in setbacks above the eighth floor, increasing lot coverage from 80% to 84.2%, allowing vehicle entry off a primary frontage and more.

The 12-story building is to have about 80 basement parking spaces, of the 111 planned, with the rest above the second level.

Mr. Borges said there will be six levels of storage and four levels of offices.

Board member Fidel Perez said the very important site at an exit off I-95 and the entry to Brickell sees a lot of traffic.

With so many uses, Mr. Perez said, “I see conflict between the uses.” He mentioned the challenges of in and out traffic due to the storage units.

Mr. Borges said some storage units would be used by retail tenants to store specialty merchandise, while office tenants are expected to us other storage units.

As for the art walls or panels, Mr. Perez said, “The word ‘temporary’ bothers me.”

He added, “Will they be up today but gone tomorrow?” Mr. Perez suggested a covenant from the developer promising to maintain the large panels.

Mr. Borges said the changeable art would be switched out much the way a gallery works.

“It’s art for the life of the building. That is the intention,” he said.

Mr. Perez said he felt the design left blank walls on the east and south, on the southern residential building next to an existing gas station. He suggested different façades with art or glazing.

“I do think those walls need help,” said Mr. Perez.

Mr. Borges said the designers worked a long time to develop the planned façades on that building, running through numerous options.

“This is a tenth variation,” he said. They didn’t want to overwhelm the main façade of the project, he said.

Board member Robin Bosco said he liked the project, calling it nice and exciting, but questioned the need for so many waivers.

Mr. Borges said it is an urban infill site with challenges and he felt they have “managed the complexities” of the property as best as possible.

Board member Neil Hall said he was a bit surprised by the project. Holding up the thick packet of drawings and renderings, he said this is the first time he can remember seeing finished plans brought to the board.

Mr. Hall said it put pressure on the board to approve the project, yet the developer was asking for a host of waivers.

“I would have liked to have seen this earlier,” said Mr. Hall.

Mr. Hall went on to say he was puzzled by mixing storage with an office complex, that it seemed to be a contradictory marriage. “I see problems with it.”

He also noted the site is at “a very important corner.”

Mr. Borges said no disrespect was meant, and that the architects have been working on the project with city staff for 10 months. He said the city’s planning staff is so busy they almost had to beg to be assigned to work with one of the city officials on the project.

As for the many mixed uses, Mr. Borges said they like the hybrid plan, calling it unique and unprecedented.

Mr. Bosco and board member Anthony Tzamtzis agreed with Mr. Hall about the concerns raised by bringing an entirely finished project to the review board. Mr. Bosco suggested all plans come to the board for initial review, long before nearing the final stage of drawings.

Mr. Tzamtzis said, “It puts this board in a very difficult position – the project is fully developed. Any comment we have will impact you a lot.”

Mr. Tzamtzis even suggested the board abstain from a vote and leave it to the planning department. But an assistant city attorney advised that the board could not abstain.

A motion was made to recommend approval as presented, which passed 3-1. Mr. Perez voted no.

In a statement released after the meeting, Mr. Borges said, “The Megacenter project is vital in that it represents the future of the surrounding neighborhood with a visionary approach to the integration of art which welcomes you from the I-95 off ramp into the emerging mixed-use, world-class Brickell neighborhood.”

Developer Megacenter U.S. was founded in 2012 in partnership with Chilean-based Red Megacentro to develop its business model in the US, under the guidance of developers Patricio Ureta and Pablo Wichmann. The company offers office, warehouse and self-storage space in Chile, Peru and Miami.