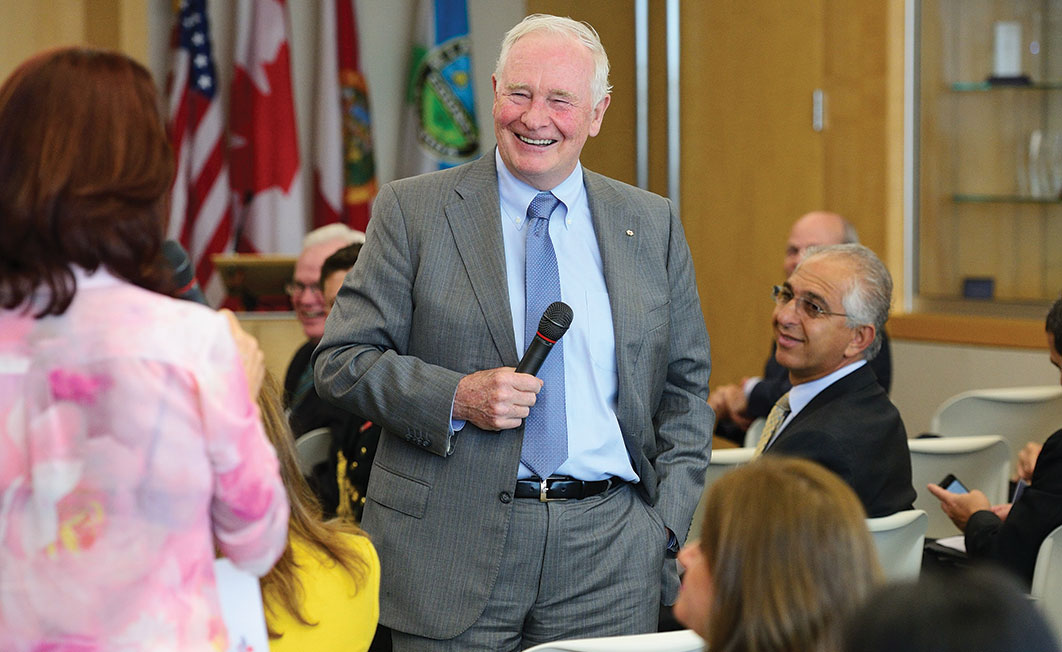 Canada’s Governor General David Johnston focused on trade and tourism relationships between the US and Canada at a recent breakfast address hosted by the Beacon Council in partnership with eMerge Americas and the Greater Miami Chamber of Commerce.

The goal of the official visit’s stop in Florida, Mr. Johnston told Miami Today, was to strengthen the already strong relationship between Canada and the US, particularly South Florida, adding that he had a desire to understand the “remarkable spirit of innovation that exists in Miami.”

The trip marked the first time that a Canadian governor general had visited Florida.

“We Canadians tend to think of South Florida as a wonderful place of sun and beaches, and 800,000 Canadians come each year to enjoy it, but Miami is so much more than that,” he said. “This is a crossroads, not only between North America and South America, but a crossroads for the world.”

Canada is Florida’s No. 1 customer and partner, Mr. Johnston said.

More than 600,000 jobs in Florida are dependent on trade and investment with Canada. Yearly trade between the state and Canada is worth $8.1 billion, with more than 200 Canadian companies in the state. Canada is Florida’s most significant economic partner in trade, agriculture, investment, tourism and real estate. Canada buys nearly a quarter of all of Florida’s agricultural exports. Canada sees its expertise in public-private partnerships as an opportunity to work together to benefit Florida companies and Floridians as they meet the state’s infrastructure needs.

Already, 315 Canadian-owned companies operate in Florida – and that number is growing each year, Mr. Johnston said.

The “ease of doing business from [Miami]” is one of the most attractive reasons for Canadian businesses to look into expanding into Miami, he said.

“It’s the cosmopolitan, diverse community you have here,” Mr. Johnston said. “It’s the fact that you’ve centered here customer opportunities and business opportunities from the Americas, but also from the world. That especially draws Canadian investors to this part of the United States.”

“Another reason Miami would be particularly attractive for Canadian investors is, we believe we’re blessed with the North American Free Trade Agreement. But we also have signed a free trade agreement, which is quite extensive – not only goods and services but regulatory issues – with the 28 countries in the European Union, yet to be ratified. That too will be an attraction for European countries, business, etc., to see a Canada-US partnership as a very important entry for them into those markets, and for business that want to sell into those markets.”

The Consulate General of Canada in Miami is one of the largest Canadian consulates in the US.

Additionally, one of the largest sections within the consulate is trade and investment promotions.

Once back in Canada after business trips – the only kinds of trips he takes, as he only travels at the request of the government – first on the agenda was to write a letter to the Prime Minister, Mr. Johnston said.

“That letter is usually sent to a few people in our Ministry of Global Affairs, which includes our Ministry of International Trade,” he said. “We begin with a particular objective for the trip… and then at the end of it we attempt to determine whether we’ve met these objectives and, most importantly of all, what follow-up steps are appropriate.”

“We’re both trading nations,” Mr. Johnston said. “But as we look over past years, Canada and the US had a common cause… in trying to reduce trade barriers, not simply tariffs but regulatory activities, and fences and hurdles within particular countries. I think in the years ahead, together we’ll be working very hard to try to remove barriers and to recognize that you want each nation to do what it does best and to be able to function in a global marketplace.”