Advertisement
The Newspaper for the Future of Miami
Connect with us:
Front Page » Filming » Lost film and entertainment incentives costing jobs 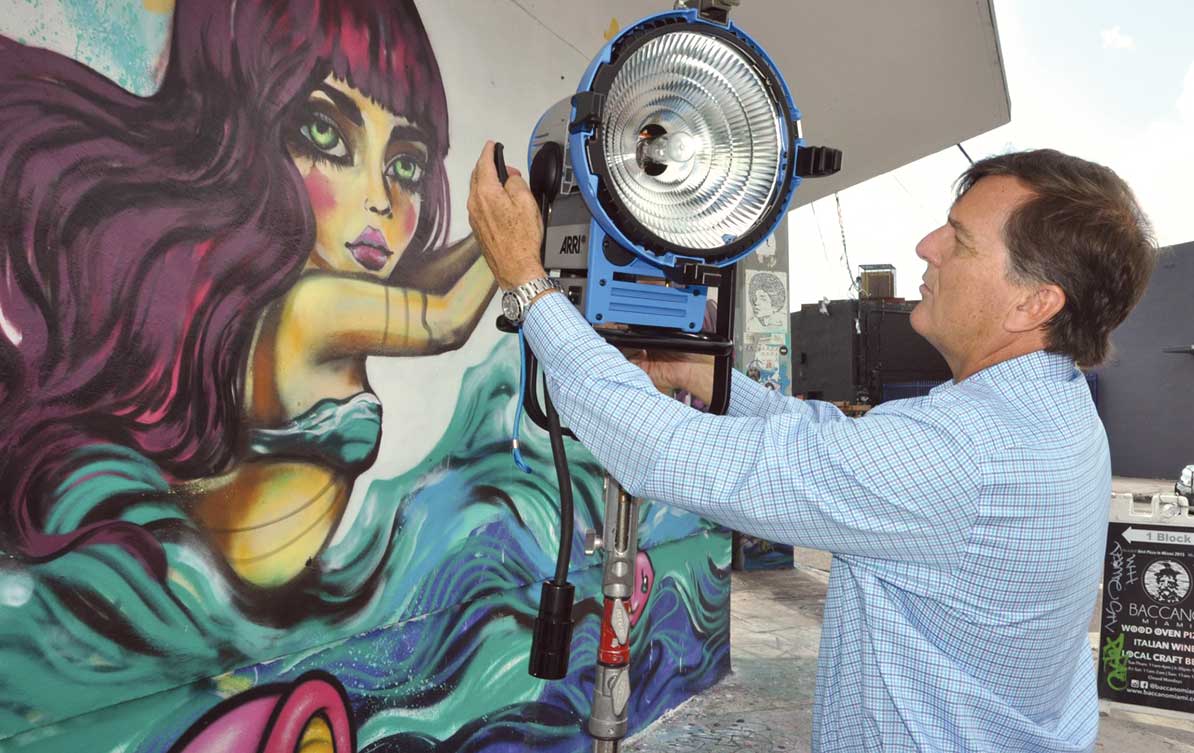 After four consecutive years during which the Florida Legislature failed to add new funding to film and entertainment incentives, some behind-the-cameras workers have relocated to states that offer robust programs, including Georgia, Louisiana and North Carolina. Industry stakeholders worry that the local workforce will follow the jobs elsewhere.

“Our friends think we’re nuts for not just packing up and heading for Georgia, as most sane film professionals have already done,” said Barbara Peterson-Malesci, who is a set decorator and production designer. Her husband, Art Malesci, is a stunt coordinator and second-unit director who was responsible for stunt production on the “Burn Notice” series.

“We have both been working in this town for more than 30 years and made a good living here. Until now. In the past year, even though I have been doing ‘Ballers’ and a few pilots and pieces of movies and commercials, the winds of change are in the air.”

Mr. Malesci has worked in Georgia and Louisiana, and Ms. Peterson-Malesci has been offered work in Georgia. But the couple lives in and remains loyal to South Florida.

“Not a week goes by that someone on the phone, at the office of a vendor far away, doesn’t say, ‘Oh, you’re in Miami! Is it really everything they make it look like in the movies and on TV?” and I say, “Yep, it’s exactly that, and more. Come on down!”

She said she hopes visionary leaders – who understand not only the industry’s direct economic impact but also the free advertising productions here generate – will step in to rescue the industry.

In April, Miami-Dade Mayor Carlos Gimenez announced that his administration is working to offer inducements to productions on a case-by-case basis.

The production would have to prove it was viable, could comply with Miami-Dade’s hiring requirements and would deliver sufficient return on the county’s investment, added Sandy Lighterman, the county’s film commissioner, at that time.

“As support dwindles in Tallahassee, we feel it’s time for our local leaders to step up and assist our industry,” said Mike Zimmer, principal of Unique Producers, a local industry presence for more than 40 years. “It will be a challenge for our business to continue at its current level if that support is not realized. If Miami-Dade County could offer its own rebate program, it would send a message to the industry that we support their projects.

“I know that the majority of the support must come from Tallahassee, but it has failed to act, so we have to be proactive in our support at a local level,” Mr. Zimmer said. “We are at a critical time. We must do something to keep this industry afloat, and it’s up to our local leaders to make that commitment.”

“I have worked and lived in Fort Lauderdale for almost 20 years,” said Shona Tuckman, CEO of Kreate Films. The company is headquartered in nearby Hollywood, and its 2012 first feature film, “Finding Joy,” was shot entirely in Broward County with a production team that was 98% local, she said.

“Since then, we have been forced to spend our budgets on out-of-state productions,” Ms. Tuckman said. “It has become financially impossible to convince financiers and executive producers that [filming in Florida] is a good idea. It just doesn’t make sense for the bottom line. There is so much talent and so many amazing locations here, but producers like me have no choice but to look at other states and their incentives when budgeting a film. I would like to see assistance for those of us who are living and trying to work here,” she said.

A program “could start small and allocate funds for producers like me, Florida residents who have projects ready to go. That would be a start, at least,” Ms. Tuckman said.

“My job is to spend money!” said Jane Johnson, a set decoration buyer and veteran of more than 30 years in the industry. “I live in Miami but have worked all over the state. I honestly have no idea what I will do if we lose the last of the film jobs in Florida. I do not want to work out of Florida, but I may have to.

“The new game is tax incentives and our state legislators refuse to play,” Ms. Johnson said. “Our county tax base is healthy; so could local incentives happen? I have walked the halls of our state capital and shared my story and my support for the incentive program. The word is: no tax break, no jobs. I will continue to fight for an industry that I have found to be a wonderful, creative, well-paying, commerce-generating and a perfect marketing vehicle for our beautiful state.”

“I am a production coordinator working in the film and television industry in Florida since 1996,” said Pam Holdridge, whose credits include “Bloodline,” “The Glades,” “The Finder” and other productions.

“The Florida Legislature has failed to renew the current film incentive program, creating a sense of urgency for me and [other] industry professionals. Having experienced the ebb and flow of production in Florida prior to the film incentives, I learned to maintain a tight budget for the lean times. However, it has not prepared me for what is going on in Florida now.”

Ms. Holdridge said she is submitting her resume in other states, thought “it means leaving loved ones for months at a time, not an easy lifestyle. I would like to believe that projects will choose Florida for its locations and beautiful weather year-round. However, I am a realist and recognize the attraction of the film incentive programs in other states,” she said.

“If the Florida film incentive is not part of a statewide program to encourage the film and television industry to bring projects to Florida, I hope that a film incentive will be considered on a county level,” Ms. Holdridge said.

“As a film producer and writer, I try to come up with stories that can be done in Miami and in Florida,” said George Edward Fernandez. “As a producer, I have to look for the financing to get these projects off the ground. I’m the guy who hires the crews to work on the projects.”

The Legislature’s non-action on incentives “is sending a message to possible investors, who become wary of putting dollars into a business that is frowned upon by the state. People I have known the past 30 years have been forced to pick up and leave their homes because of the Florida Legislature’s actions,” said Mr. Fernandez, who is currently teaching at the New York Film Academy on South Beach.

The HBO series “Game of Thrones” has bought more than $100 million in tourism revenue into Northern Ireland, he said. “We easily had that here in just South Florida,” Mr. Fernandez said. “Our Florida Legislature is going in the wrong direction. We cannot continue to lose the talent behind the camera. That is talent is highly trained, and it is irreplaceable when it leaves.”

“There is nowhere else like South Florida for filming,” said Jason Villella, who has worked in the local industry since 1997 in varying capacities and is now working as the rigging gaffer on “Bloodline.”

“I am a Florida native,” he said. “The people who work in this industry are artistic and creative people, which I believe has made Miami the beautifully eclectic city that it is. Miami is a city of creativity, and filming is another way of expressing that and showcasing how diverse cultures, races, languages and religions can come together to make a great city.”

His message to the industry: “Come, film in Miami, where we are professionals who love our job and our city.”

“I can attest that many projects promote travel and tourism in Florida,” said Bill Marinella, a principal of Extras Casting. Though extras are temporary employees, “Tens of thousands of extras worked on ‘Magic City’ alone during the two seasons we shot in Miami, creating money that is spent locally,” he said. “Imagine if there were 10 films shooting at once, as it was during 2011,” when incentives were still in place.

Auxiliary spending boosts the local economy, he said. “It’s not just movie people who are working; it’s all the extra businesses that support our needs. Bring back the film incentives!”

Mike Savitz, principal of Shoot Collective, a Miami-based production company that has specialized in television commercials for more than 17 years, has a more sanguine outlook.

“We have found that most of the crews that consistently work on our projects are staying put here,” he said. “Commercials come to South Florida because they want the experienced labor force, the best suppliers, the diverse talent pool, the varying landscapes and the beautiful weather. An abundance of accommodation options doesn’t hurt, either. Advertisers and advertising agencies love to be in Miami, and they love the material they take back with them once the project is complete.

“Our hope is that Miami-Dade will begin providing its own film incentive program to lure more feature films and television series back to the area,” Mr. Savitz said. “If the incentives are there, they will come, and as a result our crews and suppliers will stay put. I can tell you this: Shoot Collective is not going anywhere.”