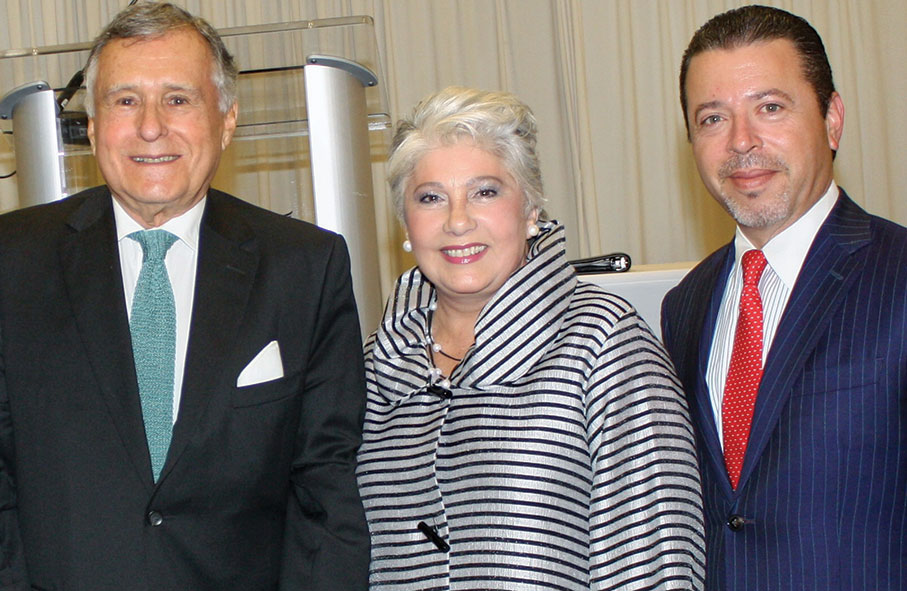 At the ceremony, longtime government leader Maurice Ferré accepted the Lifetime Achievement Award for his past and current contributions to the community.

In balloting for the top organization, judges selected the Boys and Girls Clubs of Miami-Dade for the Gold Medal. The clubs, which in 2015 received the Switchboard of Miami Most Valuable Nonprofit All-Star Award, provide affordable educational programs for 8,000 children aged 5 to 16 in five facilities.

Eduardo J. Padrón, president of Miami Dade College for more than 20 years and winner of the 2015 Diverse Champion Award from Diverse: Issues in Higher Education, was honored with the Gold Medal for an individual.

Dr. Padrón at the time of the ceremony was hosting US Secretary of State John Kerry at the college, so the award was accepted for him by Mark Cole, executive director of the Miami Dade College Foundation. Thomas Julin, partner at Hunton & Williams law firm, a Gold Medal Awards sponsor, presented the individual Gold Medal.

Miami Lighthouse for the Blind won the Silver Medal for an organization based upon two major awards in 2015: the Sapphire Award from the Florida Blue Foundation, which recognized it as an outstanding nonprofit community healthcare organization, and the Beacon Council’s Distinguished Industry Award for outstanding contributions to education. Lighthouse President and CEO Virginia A. Jacko and board Chairman Ray Casas accepted the award from Joe Jimenez, vice president of legal & regulatory affairs of sponsor Codina Partners.

The Silver Medal for an individual went to Henry Fleches, chief executive office of United Data Technologies. In 2015 he was named Businessman of the Year by the US Hispanic Chamber of Commerce.

The voting for the Bronze Medal for an organization ended in a tie, with judges choosing two winners.

One Bronze Medal for an organization went to Express Travel, which was honored as one of the Commonwealth Institute’s Top Women-Led Businesses of Florida in 2015. Accepting the award, president and CEO Olga Ramudo noted that she had started the company in her garage, building it to a staff level of 31. Miami Today Vice President Carmen Betancourt-Lewis presented the award.

The other Bronze Medal for an organization was presented to Zyscovich Architects, which was recognized with the 2015 Synergy Award from the Society of American Registered Architects for outstanding service to the profession. Accepting was founder Bernard Zyscovich, who noted that a firm started in an agricultural shed 39 years ago had been responsible for the master plan of the Midtown Miami project. Presenting the award was Richard Gibbs, senior communication specialist from sponsoring Florida Power & Light Co.

The Bronze Medal for an individual was presented to Steven L. Cantor, managing partner of Canton & Webb P.A. He was named by Latinvex one of Latin America’s Top 100 Lawyers in 2015. Mr. Cantor noted that while he didn’t start the firm in either a garage or agricultural shed, he did start with just himself and an IBM Selectric typewriter. Ms. Betancourt-Lewis presented his award.

In accepting the Lifetime Achievement Award, Mr. Ferré, who has long been considered a visionary, said that “Miami tomorrow’s quality of life will be determined by three all-important measured: sustainability, transparency (or accountability), and equality.”

Harking back to the legacies of Thomas Jefferson, John Locke and David Hume, as well as James Madison, Abraham Lincoln, and Theodore and Franklin Delano Roosevelt, Mr. Ferré said that “for Miami to become a major hemispheric center or a global city we must lead in finding egalitarian solutions to our problems.

“Yes, pay attention to climate change, flooding of roads in Miami Beach, where did our half percent sales tax money for transportation go and how can we better fund Jackson’s coming shortfalls. But also, how can we assure that all of our citizens have an equal opportunity and equal access to all governmental services?”

Mr. Ferré was recognized for long-time service. He was mayor of Miami from 1973 to 1985, working to make sure that the city became truly a gateway to Latin America and that the downtown core developed logically. He also served in the Florida House of Representatives and as both a city and county commissioner. He continues in public service as a member of the Miami-Dade Expressway Authority and of the Florida Transportation Commission.

Judges based selections on:

•The importance of achievements for which nominees had received awards in the past year and the stature of the recognizing organizations.

•The long-term impact of the honorees’ achievements on this community.

Miami Today 17 years ago established the Gold Medal Awards to honor The Best of the Best, choosing among those that already had received from peers top honors in a vital category in the prior year.

Trophies were presented after an invitation-only reception and dinner at the JW Marriott Marquis downtown, which has been the site of the past five dinners. Mr. Ferré noted in accepting his award that his father had once owned the land upon which the hotel now sits.

Past Gold Medal Award winners, the judges and leaders in business and education, as well as an international delegation of consuls general, attended to salute the honorees.