Advertisement
The Newspaper for the Future of Miami
Connect with us:
Front Page » Opinion » We’ve got no kicks about soccer, but oh that parking void!

We’ve got no kicks about soccer, but oh that parking void!

Sports might have the ultimate stadium concept in David Beckham’s plan for soccer.

That leaves absolutely nothing to dislike when Major League Soccer returns to Miami after failing the first time around.

But there would also be no parking for fans, few dining spots and slim retail.

If Mr. Beckham and associates can profit on far-from-prime land with few amenities and no monetary help from government, that’s great.

One thing certain: soccer in Overtown won’t freeze out job-generating industry dying to open there, so anything the Beckham syndicate can do to create jobs and earn a profit there is a plus.

We haven’t seen the color of the $220 million the group estimates as stadium costs and doubt they’ll come up with it easily, but if they don’t ask the public to back bonds or pitch in taxes, that’s their business. If they make it, great. If not, they’ve got $18.95 million in Overtown land to resell.

But we’re skeptical of the plan for 25,000 fans a game to walk from Metrorail blocks away or from parking farther out. Walking to soccer en masse is a tradition, but not in Miami and certainly not in Overtown.

Besides, any stadium would have other uses, like concerts. Concertgoers have no tradition of walking miles in and out again.

Miami, to put it politely, is not a place where hardy souls walk everywhere. Even those who run miles for exercise won’t walk blocks out of necessity. We are born attached at the seatbelt to our cars. 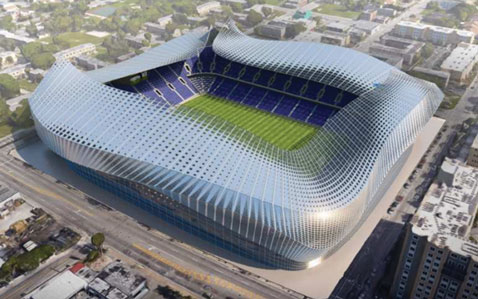 Rendering shows how the soccer stadium might fit into its Overtown neighborhood.

Again, the stadium is being sold as a private development with totally private funds with no public subsidies. Pardon the skepticism, but that’s not the way pro sports do things, especially in Miami. And what about the $60 million that new stadiums draw from the state as a subsidy?

If lack of subsidies is real, however, we have no quarrel with a business plan that seems terribly flawed. If the Beckham group is betting only its own money on Miamians suddenly stretching their legs for miles to and from a game, that’s their bet, win or lose. It should never be allowed, however, to become the public’s bet.

When the Adrienne Arsht Center for the Performing Arts was planned we objected editorially to the removal of a garage from plans with the specious reasoning that concert-goers would park downtown and just walk over. They still don’t walk, the center’s two beautiful halls are painfully underfilled for fine performances and the public still subsidizes the center more than $8 million a year.

Now, a decade later, the Arsht Center is about to get its first dedicated parking, though we have no details about who will pay to build it. The garage should add attendance, though by now the subsidy has become a permanent feature in the county budget that might not disappear as the center adds paying guests.

As for soccer, everyone favors it. The team plans to buy land from the county at market value for part of the site and wants to buy land from the City of Miami for staff parking – they say soccer fans will walk but know that they won’t walk to work themselves. All of that is fine at market prices if the land isn’t needed for public purposes and nobody will pay more than they will.

Then comes city zoning. It’s a question whether to zone for a stadium for 25,000 people with no parking at all. That issue must deal with neighbors – what happens when fans try to park in front of their homes and stores? It’s fine to assume fans will ride Metrorail or walk from parking lots elsewhere, but we know that they won’t all do it. And how do concerts and other uses fit into the neighborhood?

Little Havana residents were fine for years parking Orange Bowl fans on driveways and lawns at $10 a pop. Maybe Overtown entrepreneurs would too.

This is the Beckham group’s fourth try that the public knows of to get a site. They’ve gone from ultra-prime waterfront to a mediocre site beside Marlins Park and now to land nobody wants in Overtown.

It would be a pity if this can’t work. Soccer appeals to many in Miami, even the second-tier games in this league (calling something Major League doesn’t make it so).

But the Beckham group aren’t Miamians. They’ve gotten such warm applause at places like the Greater Miami Chamber of Commerce that they might not be prepared for our economic realities.

One is that Miamians don’t back losers, and every team at some time becomes a losing team. This is not Chicago, where the Cubs fill every seat, win or lose. Ask the Miami Marlins where the fans are – they’re somewhere else.

That reality needs to show up in the Beckham group’s business plans.

To the investors, we believe soccer can be a Miami amenity and we welcome you as we do every enterprise investing its own money to achieve success. Get your permits and build your $220 million stadium.

But you’re going to learn soon you need parking to prosper.

5 Responses to We’ve got no kicks about soccer, but oh that parking void!