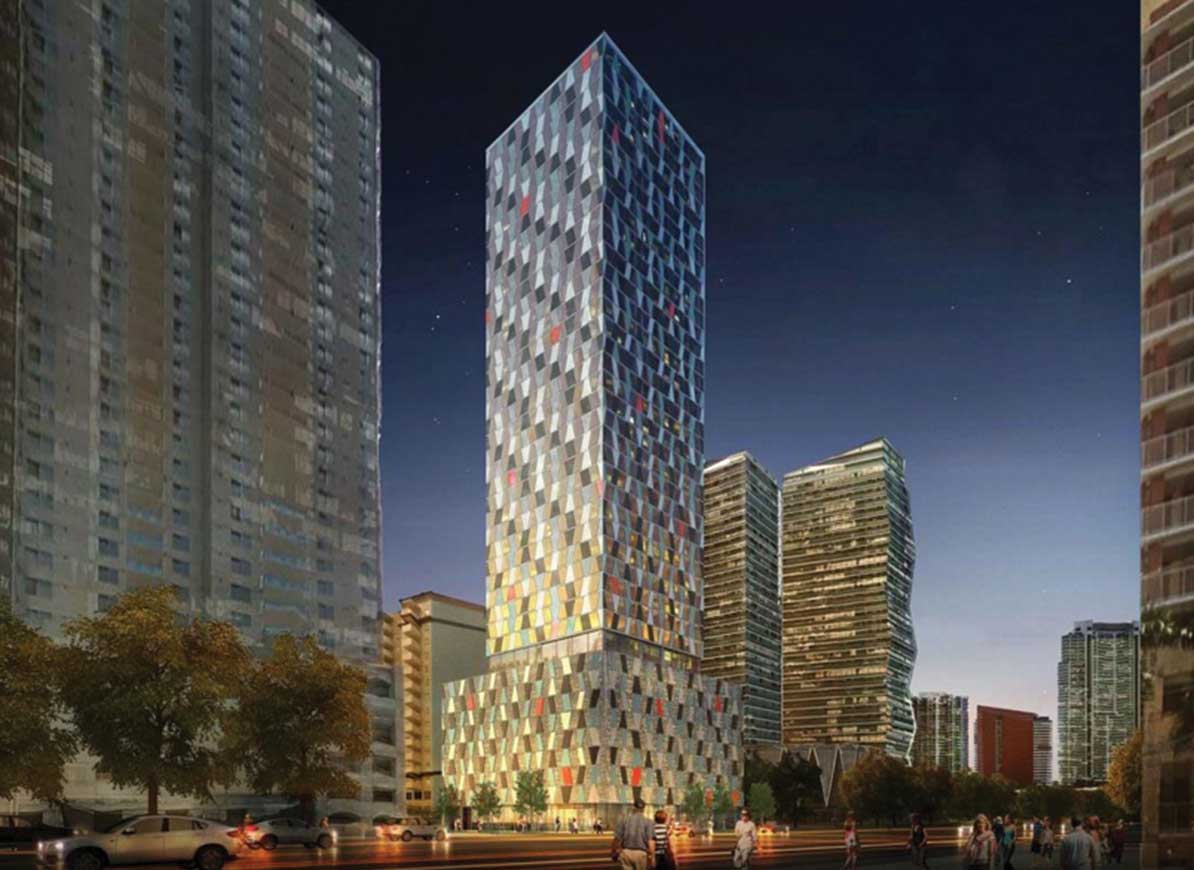 A new hotel is rising in the heart of Brickell, across the street from Mary Brickell Village and the Metrorail and less than a block from a Metromover station.

The city’s Urban Development Review Board recently recommended approval of the project.

The hotel is to be 44 stories and include about 18,072 square feet of conference rooms, 8,900 square feet of retail uses and parking for 223 vehicles.

The mixed-use project is seeking waivers including permission to allow vehicle entry from the principal frontage, allowing parking into the second layer, a 10% increase in allowable lot coverage and a 30% reduction in required parking.

Attorney Melissa Tapanes Llahues represented the developer and said the hotel is planned for a vacant site of about one-half acre.

The hotel’s “unique and modern” design is the work of Arquitectonica, she said.

Arquitectonica founding principal Bernardo Fort-Brescia had a presentation for the board showing renderings of the hotel.

The neighborhood surrounding this infill site is quite developed, he said.

The design of the hotel is “very pure,” offering a series of panels as skin onto the façade, Mr. Fort-Brescia said.

“It plays with the geometry,” he said.

Colored panels mix with white panels as the façade of the garage area, which serves as the podium of the hotel. The parking levels are louvered to allow air circulation, he said.

“There is almost a basket weave undulation on the skin,” said Mr. Fort-Brescia.

The ground floor is designed with a lobby and will include space for a restaurant.

“I want to commend the architect for again bringing a high-quality project to the Brickell area,” said board member Fidel Perez.

“I think you have a beautiful building,” he said. Mr. Perez did suggest using a different material to the pedestal, beyond paint and stucco. He suggested some aluminum panels.

“I appreciate your effort on this project,” said board member Neil Hall.

Board member Dean Lewis said the ground floor corner could be more exciting. “Your marquee is somewhat modest. It could be much more exciting,” he said.

Mr. Fort-Brescia said the location is very small and tight site, and it was a challenge to design the ramps and parking levels.

“It’s a great project for your client,” said board chair Robert Behar.