Advertisement
The Newspaper for the Future of Miami
Connect with us:
Front Page » Communities » Marina for mega-yachts on Miami River seeks tenants 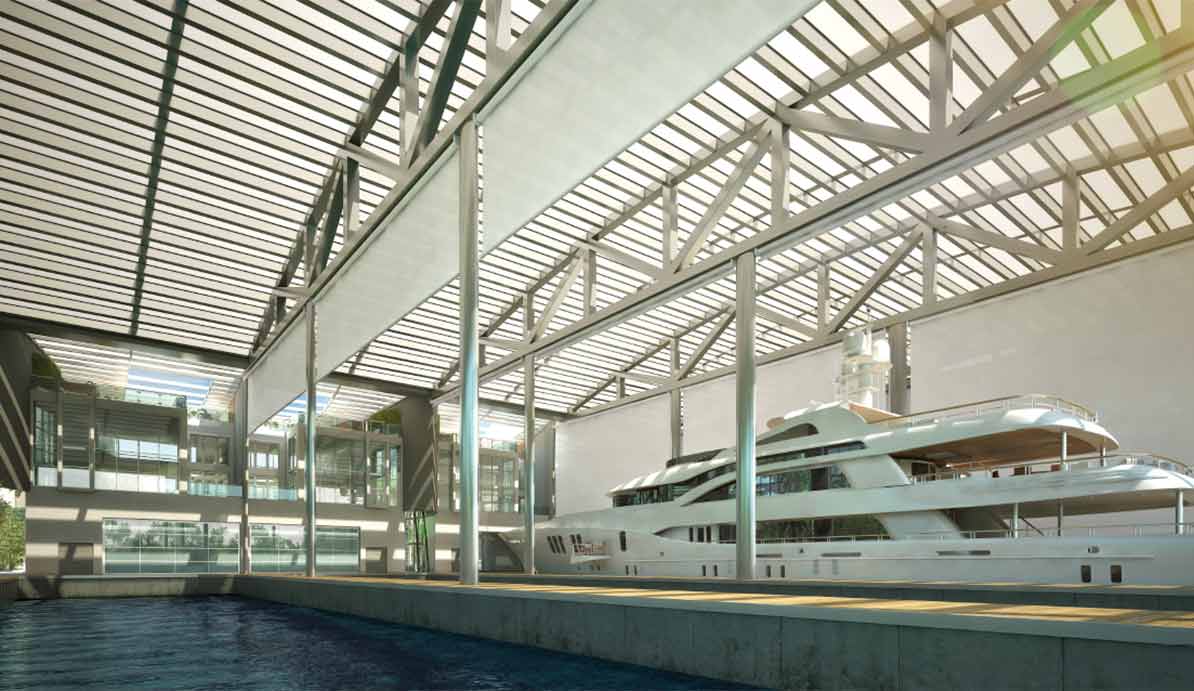 The plan to build a secure marina for mega-yachts on the Miami River continues to evolve as the owner-developer works to secure tenants for his unique commercial venture.

SeaVault is designed as a temporary home for mega-yachts with living quarters for captain and crew. The plan includes a clubhouse, tennis court, swimming pool, cold storage building and private vehicle parking on a secured site with tropical landscaping.

“We are in process of our sales, and we’ve had a great interest from several vessel owners,” said developer Homero Meruelo. “We are working with them on a daily basis.”

Mr. Meruelo’s team is also preparing to present the SeaVault plan to county officials for approvals. He hopes to go before Miami-Dade commissioners in 60 to 90 days.

First announced in 2014, the project has advanced slowly as government approvals and permitting have been sought.

The Miami River Commission has endorsed the plan, and Mr. Meruelo said he’s gained the approval of city planning and zoning officials.

The SeaVault project earned the support of the river commission in part because members said it helps maintain the busy waterway as a working river, with active commercial marine uses.

The developer says the project will bring to the Miami River the very sought-after mega-yacht industry, which has gravitated toward Broward and Palm Beach counties.

Mr. Meruelo launched a sleek website for the development last August, coinciding with sales of the slips and accompanying quarters.

The site is on the south side of the river, at 1583 NW 24th Ave. The property has been home to a working marina for decades, with some of the structures dating back to the 1940s and ’50s.

The property used to be known as Florida Yacht Basin, and was identified by the original Miami River Corridor Urban Infill Plan as “an ideal location for a mega-yacht boatyard and mixed use site.”

The project was originally called Miami Mega Yacht Marina, and proposed a facility for up to 16 mega-yachts.

In early 2015, the plan was renamed and the site plan altered a bit. The plan gaining the approval of the river commission in March carved out slips for up to 14 mega-yachts.

Mr. Meruelo says the exact number will be determined by the owners he is able to line up.

“The configuration of the marina and the sizes will be changing according to everybody’s needs. Until we’ve secured the actual sizes and users, we can’t go for our building permits,” said Mr. Meruelo.

Mr. Meruelo declined to discuss how many owners have purchased a spot in SeaVault, but he said interest in the project remains strong.

“We’ve had interest from not only individual users but from boat manufacturers,” he said. The boat manufacturers have expressed an interest in slips at SeaVault for areas that could be used for warranty work on the large vessels, and for temporary staging or delivery purposes, he said.

“It’s the only project in Florida that allows you an enclosed berth,” Mr. Meruelo said.

Architects working on a project say it is the first of its kind in the world – everything in one location for the owners of big boats.

“They belong on the Miami River, sheltered and closed, and in close proximity to all of Miami’s social life,” Mr. Meruelo said of the all-in-one marina.

The only other venue providing a place to keep the larger mega- and super-yachts is the new marina on Watson Island called Deep Harbour. Considered phase one of the large mixed-use project called Island Gardens, the deep water marina opened Jan. 8.

Mr. Meruelo said he was looking forward to the opening of the Island Gardens marina, seeing it as a conduit to his venture.

He views Deep Harbour as transient and SeaVault as more permanent.

“We complement each other,” said Mr. Meruelo.