Advertisement
The Newspaper for the Future of Miami
Connect with us:
Front Page » Opinion » Projects around stations as vital as the trains themselves

Projects around stations as vital as the trains themselves

First, residents around stations will disproportionately use transit, not cars.

But as our reports last week point out, while interest in developing near transit is booming, not much has yet translated into brick and mortar.

That’s important, because our hyper-development cycle is nearing an end, as such booms have since Miami was founded 119 years ago. Both commercial and residential starts are slowing. For evidence, look at downtown’s skyline, which a year ago was solid construction cranes. Most are gone.

That’s neither good nor bad. Some development will continue, but the pace is slowing. That pace will accelerate again, but nobody knows when.

What is certain is that development around transit is healthy for Miami but won’t rise at the speed and volume we want unless it’s also healthy for developers – that is, profitable. 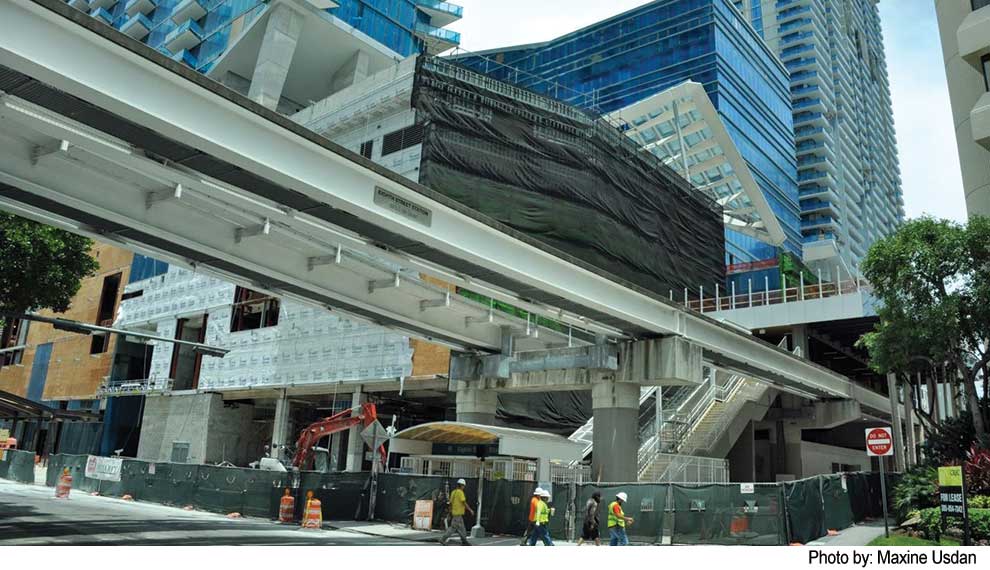 What should also be obvious is that the more transit we connect in a system – though it may be multiple modes – the more opportunities for transit development and the more valuable each transit development site becomes. With more transit lines we will add people who can easily reach each stop and at the same time add places those transit-using residents can work, shop or visit.

That’s why plans for rail links to west and south Miami-Dade on CSX tracks are so appealing: they can broadly add connectivity with a quick start-up. After all, the right-of-way and tracks are waiting.

A Tri-Rail link downtown now awaiting its infusion of state funds is another quick addition, with the same benefits. All Aboard Florida’s Brightline linking West Palm Beach and Fort Lauderdale to Miami is a similar increase in connectivity.

Each of these additions seems anywhere from quite possible to nearly a sure thing. Together they will add users of present rail lines and offer more transit-oriented sites along their routes.

These will be much more important to younger households, who are far more likely to live near transit, use it and fill in the gaps on foot or bicycle. You now can’t pry many Miamians out of cars, but that will diminish with each passing day, making transit both more vital and more attractive to developers.

That’s why county action last week to push ahead a Coconut Grove Metrorail Station lease for apartments, retail, offices and a hotel is so vital. It’s been in the works over a decade and now appears near reality.

Reconnecting America, which pushes nationally for transit-oriented growth, lists barriers to this kind of development where population is dense rather than where urban sprawl ensures more and more automobile rather than transit use.

On that barrier list are high land costs near transit, the complexity of mixing uses, lack of infrastructure (a plague in Miami), the difficulty of revitalizing areas without forcing out current residents, the high cost of providing affordable housing, neighborhood opposition, and lack of government policies that support transit-oriented developments.

Miami itself is further handicapped by lack of a full transit system, weather that impedes even a short walk to a train in summer rain and baking sun, and officials who give such developments low priority or squabble over who will get the right to develop government sites.

Developers after all have an overarching motivation: profit. They might have great aims to help a neighborhood and reduce traffic, but in the end if government makes a project too costly or difficult they’ll go elsewhere.

Elected officials do have powerful tools to encourage transit-oriented development as they simultaneously add to the transit system, with incentives such as waiving development impact fees and reduced required parking.

What officials can’t do is have it two ways: seek development near transit while squeezing developers so much that they raise costs and make transit area projects uneconomical.

We’re about to see a unique transit-oriented project in action as Swire brings on line its Brickell City Centre, which connects housing, offices and a vast retail complex directly with the Brickell Metromover loop and is within a short walk of Metrorail.

Next up will be striking a deal to add rail on CSX tracks and cementing Tri-Rail’s downtown link. When those are firm, transit development plans will build ridership, ease auto traffic and hasten development of a Baylink to Miami Beach.

Make no mistake: transit additions require vital development at stations as much as they need governmental support to get them rolling successfully.