Advertisement
The Newspaper for the Future of Miami
Connect with us:
Front Page » Transportation » Will Miami, Broward seaports converge? 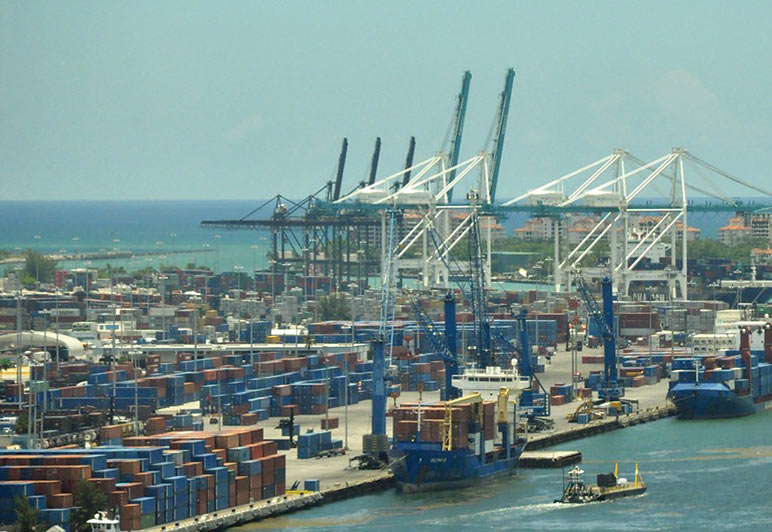 Two former rivals recently joined forces in an alliance to stave off competition from neighboring West Coast ports. The Ports of Seattle and Tacoma created the Northwest Seaport Alliance in August aiming to regain market share in what has become an increasingly competitive seaport industry.

Port Everglades Director Steven Cernak says he wouldn’t be surprised if a similar conversation transpires between the Broward County-based port and PortMiami in the future.

Comparable to how major shipping lines have shaken off competition by forming mega-alliances, Mr. Cernak predicts seaports will eventually converge in a similar way.

“It’s not something that’s going to happen tomorrow,” he said, nor will it happen during his tenure.

Although competition exists within the 30-mile gap between the two, the South Florida ports have been working together for a number of years.

“We were just together,” said PortMiami Director Juan Kuryla in early November. Officials from both ports as well as Florida East Coast Railway representatives recently traveled to Asia to promote Florida’s ports at the TPM Asia Conference, an event geared toward the logistics and shipping industries.

“We’re promoting our ports as the ports of entry for Asian trade,” Mr. Kuryla said. Whether ships call at Port Everglades or PortMiami, the FEC rail line runs through both. The cargo will reach its final destination either way. It’s up to the shipping line to choose whichever port is the best fit. But as long as that ship is sailing through a Florida port, Mr. Cernak said, it boosts the state’s overall economy.

“We’re entering a phase that [is] more about regional focus,” Mr. Cernak said during a panel discussion at the Air & Sea Cargo Americas convention this month. “Sure, we like to think competitively with each other. That’s the private sector making that possible.”

As ports around the world are faced with a changing industry molded by shipping alliances and the deployment of massive ships, Port Everglades turns its focus to Florida and the Southeast with this mantra in mind: what’s good for either port is good for the region.

“We have been with [Port Everglades] to Washington to speak or lobby on issues relating to not only both ports, but to all ports in the State of Florida,” Mr. Kuryla said.

Currently, 65% of all products heading to the East Coast come into the US via the ports of Los Angeles and Long Beach, said PortMiami’s Eric Olafson, who oversees cargo development.

Exactly two years ago, Port Everglades and PortMiami entered a pilot program backed by the US Department of Agriculture to allow the shipping of blueberries and grapes directly to South Florida from Peru and Uruguay. Historically, this was a venture deemed illegal by decades-old legislation.

In aims to prevent infestations of fruit-flies and other pests, perishables coming from Central and South America are shipped past South Florida up to cooler northern ports above the 39th parallel line, like Philadelphia, to undergo a “cold-treatment process.” The perishables are then sent back down to Florida via truck.

Thanks to advancements in technology, these fruits, vegetables and other perishables can now be treated for pests onboard a ship, which allows shippers to call on ports below the 39th parallel.

The less that cargo is handled and the quicker it gets to market, the cheaper the process.

During fiscal 2014, Port Everglades ranked No. 11 in container traffic among US ports, followed by Jacksonville at No. 12 and Miami at No. 13, according to the US Department of Transportation.

“We view our competition really as Savannah,” Mr. Kuryla said. The Port of Savannah ranked No. 4 among US ports in 2014, receiving more than triple the containers that Florida ports got.

This past fiscal year, both ports set records in containerized cargo volumes. PortMiami reported a 15% increase in container traffic for its year ending Sept. 30, while Port Everglades reported a 5% increase.

Also a major importer of fuel, Port Everglades reported a 4% growth in fuel volume entering the port. Despite a push for more fuel-efficient cars, Mr. Cernak said, fuel consumption grew, a factor he attributes to the expanding South Florida population and healthy economy. About one-third of Florida’s fuel needs are met by petroleum stored and distributed by companies at Port Everglades.

Like PortMiami, Port Everglades has a list of ongoing and future infrastructure projects to better accommodate the growing number – and size – of ships expected to visit this coast in coming years.

Although behind on deepening its channel to accommodate fully-laden larger ships, Port Everglades has concluded an 18-year study and is now designing the $374.1 million dredging project. The port plans to deepen and widen its channel from an existing 45-foot deep, 500-foot wide channel to 55 feet deep and 800 feet wide. Construction is to be completed in 2022.

Another project the port has taken on is to lengthen the existing deepwater turnaround area for cargo ships from about 900 feet to 2,400, which would allow for up to five new cargo berths. The $269.4 million project is to be completed in 2019.

One Response to Will Miami, Broward seaports converge?