Advertisement
The Newspaper for the Future of Miami
Connect with us:
Front Page » Business & Finance » As world trade plunges, Miami’s dips 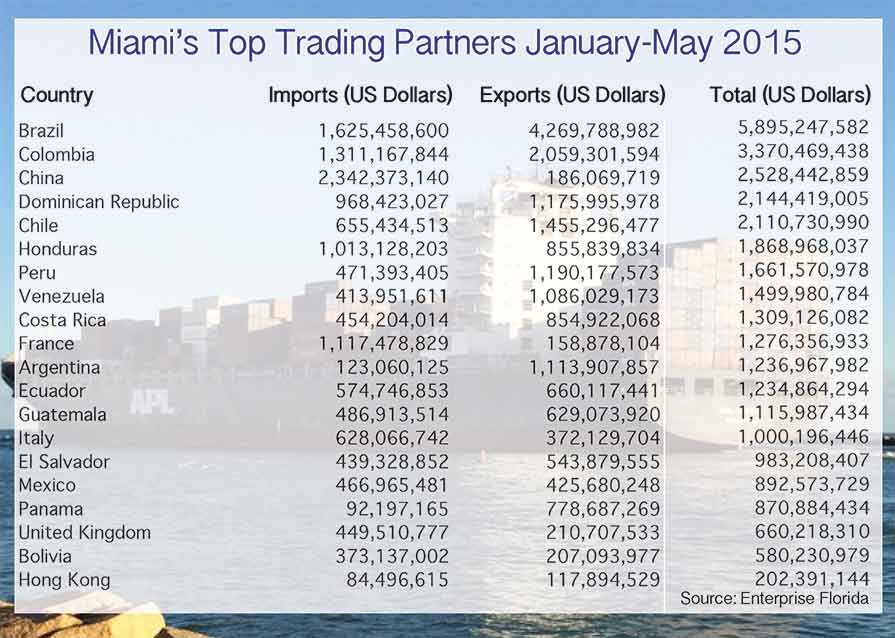 “World trade is down,” he said, “and US trade, particularly on the export side, is under pressure. It’s off by about 5.2%. Statewide, imports are off by about 1% and exports by about 1.5%. So we are doing better than the nation, but still not as well as I would like to see it.”

The culprit, Mr. Mencia said, is the world trading environment.

“China and the European Union continue to be in some economic turmoil,” he said, “as well as some nations in the Western Hemisphere.”

China is Miami’s third most active trading partner, he said, and its No. 1 supplier, accounting for 35% of imports into PortMiami.

On the export side, “there is reason for optimism for Miami in particular,” Mr. Mencia said, “because the nations of Latin America seem finally to be beginning to come out of a slower period. Unfortunately, the two exceptions are Brazil and Colombia” – Miami’s top two trading partners. Exports to Brazil are off roughly 12.8% so far this year, he said, and to Colombia about 8.5%.

“However, on the positive side of the house, exports to Mexico are doing extremely well – up 26%; to the Dominican Republic, up 11%; to Chile, 15%, and the nations of Central America are doing very well, too. So we may be beginning to see the rebound expected in the region beginning in 2016,” Mr. Mencia said.

“But the fact that Brazil, our No. 1 trading partner, is sliding into recession is a challenge, so the outlook for this year is mixed.”

Both Brazil and Colombia have significantly devalued their currencies in order to adjust to lower oil and commodity prices and the forthcoming increase in interest rates in the US, said Joseph Ganitsky, director of the University of Miami’s Center for International Business Education & Research in the School of Business Administration. Both are also affected by internal factors: in Brazil, a corruption scandal, and in Colombia, peace negotiations with the Revolutionary Armed Forces of Colombia.

Brazil’s GNP will not increase at all this year,” he said, “and if the scandal continues the impact might be more severe. As for Colombia, growth will be around 3% this year.

“All of the above is lowering our exports towards them. The rapid growth years are over.”

China’s recent devaluation of about 5% is insignificant compared to Colombia’s 50% devaluation, Dr. Ganitsky said, “but when you’re talking about the largest economy in the world, 50% would have significant impact. They need more exports, but they cannot continue to grow at the same rate without increasing their domestic market” – and greater devaluation of China’s currency could trigger a trade war.

Because South Florida is by and large an exporter of services, not merchandise goods, trade statistics fail to give a true account of the local economy, said Jerry Haar, professor in FIU’s Department of Management & International Business.

“Miami is a giant commercial air traffic control tower,” he said. “We are primarily a transshipment port; most of what we import or export is not produced here.

“Of course trade is very important, but the jobs it creates are low-rate, low-skill and high-turnover.

“What is far more important than trade is foreign investment, which creates jobs and is not volatile from one year to the next.”

Dr. Haar suggests that Miami needs to broaden its definition of exports.

“South Florida is an exporter of services – education, law, engineering,” he said. “If we’re exporting, say, data entry to Cuba, none of that is captured in trade statistics.

“In terms of commodities, growth rates have not changed all that much, but what is the dollar amount of those other exports? How many do they employ, at what salary, and what taxes do we get from them? What is the economic multiplier that we get from that?

“There needs to be some kind of reporting on the export of services, because that is where we really shine.”