Advertisement
The Newspaper for the Future of Miami
Connect with us:
Front Page » Communities » Beach rolls toward free citywide trolleys 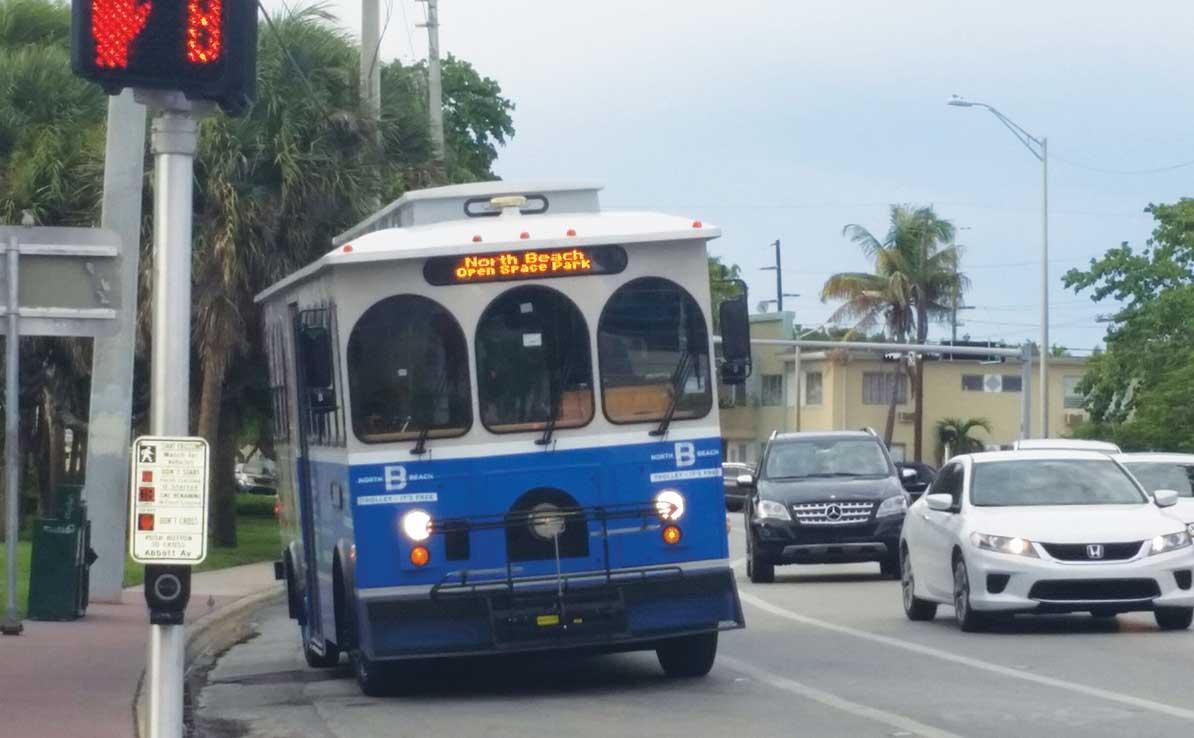 Currently, the city runs two free trolley routes. Last October it launched the North Beach Loop, which runs along Collins Avenue from 65th to 88th streets and loops into Normandy Isle on its way back down the west side of Miami Beach. It is also temporarily licensed to operate a trolley along Alton Road and West Avenue between Fifth street and Lincoln Road until construction on Alton Road wraps up in October, Mr. González said.

By spring, Mr. González said, the city expects to add two Mid-Beach routes to connect the North Beach Loop with the county-operated South Beach Local bus route. He said plans are also in the works to expand the Alton-West trolley loop into a permanent South Beach Loop. If the city gets its way, it will have one unified trolley system covering the island from Fifth to 88th streets.

Passengers would ride free on all routes. Miami Beach has the project’s full $11.8 million price tag included in its 2015-2016 budget, to be funded by resort taxes, parking surplus funds and its share of the Miami-Dade County half percent transportation surtax.

The only obstacle left in the trolley system’s path is getting approval from Miami-Dade County.

Miami Beach Commissioner Ed Tobin said the city commission and Miami Beach residents support the plan and added that he would like more cooperation from the county.

“The number one quality of life issue for people down here is traffic congestion,” Mr. Tobin said. “We’re willing to pay. And it’s frustrating because we want to spend money to improve our quality of life and we can’t” until the city gets county approval.

Mr. González said the Miami-Dade Transit Department initially balked at the trolley proposal for fear that trolley service would duplicate county bus service and take passengers away from county buses. However, Mr. Gonzalez said, the county surveyed riders and concluded that the trolleys, which would only operate in Miami Beach, would not duplicate county bus routes, which offer regional service and cater mostly to passengers traveling through Miami Beach to other destinations.

“Our objective is to attract new riders,” Mr. González said, “people who would typically use their cars, not county buses.”

Mr. González said the Miami-Dade Transit staff is now working with the city’s transportation department to plan routes that work for both governments.

The Miami Beach City Commission has approved both routes, and the county commission is to vote in September. If the county approves, Mr. González said, the trolleys will run in the spring.

Alice Bravo, who took over as director of Miami-Dade Transit last Monday and spoke to Miami Today the next day, said the Miami Beach transportation department had already reached out to her to meet and discuss plans. She declined to comment on the trolley proposal until she had a chance to look the plans over herself, but said she wanted to make sure the trolley and bus systems would complement each other.

“It’s in the county’s best interest to work with municipalities,” Ms. Bravo said. “We need all the solutions we can get.”

Mr. González said he thinks the trolley system will be very popular. The North Beach Loop serves 2,500 passengers daily, he said, “and that’s as a standalone loop that doesn’t really connect to anything.”

He also said that a South Beach trolley loop would complement South Beach Local bus service but eventually it would make sense to consolidate the two routes into one system operated by the city. That, however, is much further down the road.