Advertisement
The Newspaper for the Future of Miami
Connect with us:
Front Page » Arts & Culture » Yes, this is really a garage!

Yes, this is really a garage! 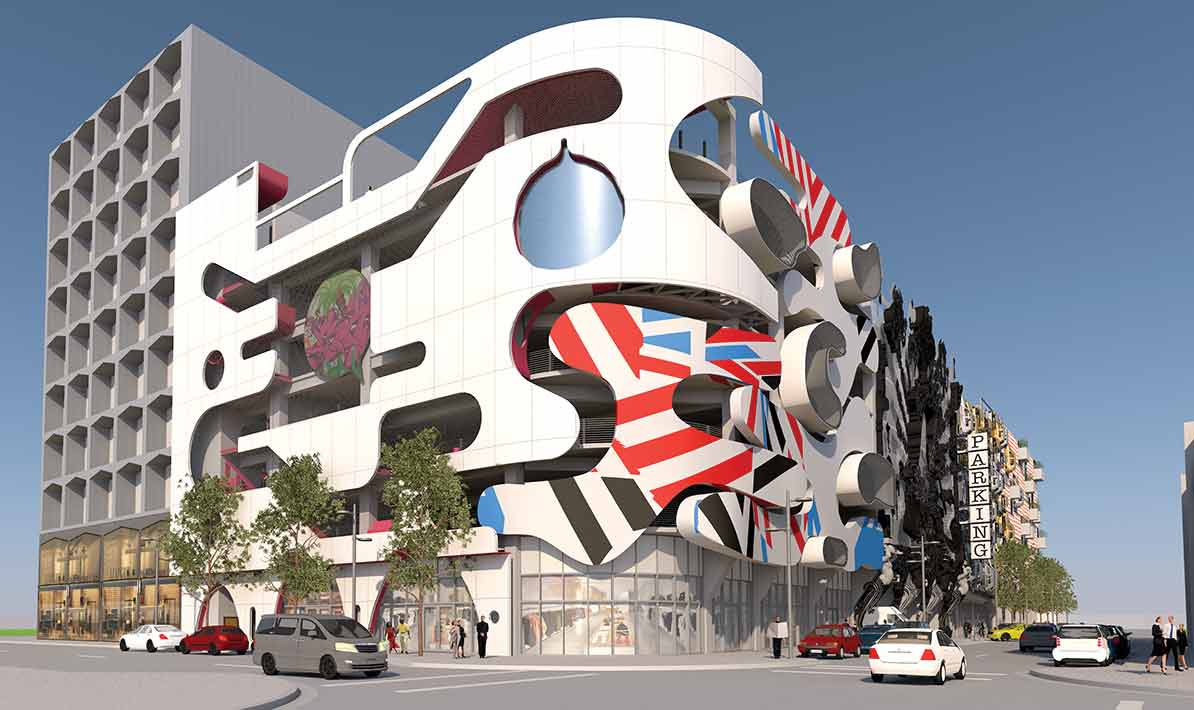 A garage like no other has advanced in Miami and will add another 800 parking spaces to the growing Design District.

Called Museum Garage, the 7-story building with ground floor retail is planned by Dacra for a stretch of Northeast 41st Street.

The city’s Urban Development Review Board on June 17 recommended approval of the unique structure.

Museum Garage is one of several parking sites being built by Dacra, the developer chiefly responsible for transforming land north of I-195 into a luxury retail destination where fashion, art and architecture are merging.

Akerman attorney Neisen Kasdin, representing Dacra, told the review board that Museum Garage is part of the overall master plan for the Miami Design District.

Dacra recognized the need for parking to help the district thrive, and Museum Garage is just one of several the company is building for the area, Mr. Kasdin said. Current plans will see an additional 2,500 parking spaces provided in the Design District, he said.

A key component to the growing district, Mr. Kasdin said, is public art, and the proposed Museum Garage celebrates that in a big way.

The building is to highlight the work of a half-dozen artists who are to craft diverse 3-D façades.

The planned garage includes design elements that encroach into the right-of-way above the ground floor. Last September, the developer gained review board approval for those encroachments.

The innovative project was back in June with firmer plans and drawings. Architectural firm Keenen/Riley is overseeing design of Museum Garage.

Terence Riley, formerly director of the Miami Art Museum, told the board Dacra asked his company to curate the façade of the garage with unique designs that would stretch the length of the building and wrap around the corner.

Mr. Riley said he sought to identify architects with enough experience to handle complicated work and still young enough to have fresh ideas. The designers are from New York, Tokyo, Spain, Berlin and elsewhere.

Mr. Riley’s presentation showed the design board renderings of each façade with background on each architect.

The eastern façade is called “Ant Farm,” with cutouts exposing stairs and walkways that pedestrians and customers will use. He said the design will offer a “special and physical manifestation of life in Miami.”

The Ant Farm intersects at the corner with a façade that resembles a British flag, with candy cane colors on interlocking fingers and curves.

The main garage entrance is to be framed by the most ornate of the designs, called “Serious Play,” from Nicolas Buffe. It is a symmetrical splash of Japanese cartoons and baroque architecture.

Next in line is a piece called “Urban Jam,” from Clavel Arquitectos of Murcia, Spain. The façade will feature row upon row of the tops of cars, painted lux gold and silver finish, Mr. Riley said.

Mr. Riley’s own company, Keenen/Riley, designed the next portion, called “Barricades.” The façade uses the repeated pattern of orange and white road barricades. Planters are scattered among the façade.

The final piece, on the corner and western end of the garage, is a mural. On a sea of pale blue is a large candle burning at both ends with the message on the candle, “BUT I ONLY WANT YOU.”

Board member Dean L. Lewis praised the work on Museum Garage, calling the design “very creative” and well thought out.

“You’ve broken the project into manageable pieces. That makes sense,” he said.

Mr. Lewis did suggest rethinking the candle, which he said is more mural than architecture.

“I think it’s a wonderful piece of work,” said Board member Anthony E. Tzamtzis. He said the type of project defies commentary. “It is art,” he said.

Board member Gerald C. Marston noted that the review board has recently evaluated several impressive designs for what basically are garages, and said Museum Garage is yet another.

He called it a “wonderful, wonderful addition” to the Design District.

Board chair Robert Behar said he liked the “fantastic” project. He said Miami may get the distinction having the best-looking parking garages around.

Mr. Riley provided background on architects and artists involved. They include:

•Dan Wood leads international projects for WORKac, ranging from master plans to buildings across the US as well as in Asia, Africa and Europe. Mr. Wood is originally from Rhode Island and lived in Paris and in the Netherlands before moving to New York in 2002. He is a licensed architect in New York and is LEED certified.

•Amale Andraos is the new dean of Columbia University’s Graduate School of Architecture, Planning and Preservation. Ms. Andraos was born in Beirut. She has lived in Saudi Arabia, France, Canada and the Netherlands prior to moving to New York in 2002. She serves on the board of the Architectural League of New York and the Advisory Board of the Arab Center for Architecture in Beirut.

•J. MAYER H. was founded in 1996 by Jürgen Mayer H. in Berlin. In January 2014, Andre Santer and Hans Schneider joined as partners. Jürgen Mayer H. studied at Stuttgart University, The Cooper Union and Princeton University. His work is part of numerous collections including MoMA New York and SF MoMA.

•Manuel Clavel Rojo, born in Murcia, is a graduate of the Polytechnic of Madrid. His work has won more than 70 awards. He was director of the Citizen Participation Project “Aleop!” and of the International Laboratory for Creative Industries of Miami. Mr. Clavel has been a visiting professor at the University of Miami since 2012.

•Nicolas Buffe, a French artist based in Tokyo, is the creator of a multifaceted and multidisciplinary universe mixing erudite and popular culture. Born in 1978, he developed from childhood a passion for anime, manga and video games.

•K/R (Keenen/Riley) is a creativity-based practice with a focus on architecture and design, led by John Keenen and Mr. Riley. With offices in New York and Miami, K/R’s effort has made contributions in architecture, master planning, urban design, interior design, museum planning, exhibition design, sustainability and education.

•Stefan Sagmeister, born in Austria, lives and works in New York. He has worked for the Rolling Stones, The Talking Heads, Lou Reed, The Guggenheim Museum and Levis.

Along with Museum Garage, Dacra recently completed work on another public garage with a unique outer shell.

Rising in the shadow of I-195, City View Garage is hard to miss. The southeastern end is covered with a sea of aluminum panels, a façade designed by firm Iwamoto Scott. The main body of the building is a parking structure, above a level of retail storefront. It is to include a small six-story office block.

Iwamoto Scott’s portion of the façade wraps around the main corner of the garage and encompasses an elevator lobby, exterior stair and the office block.

Leong Leong was commissioned to design the western façade of the City View Garage, a series of gold titanium-coated stainless steel panels.

One Response to Yes, this is really a garage!