Advertisement
The Newspaper for the Future of Miami
Connect with us:
Front Page » Business & Finance » Entrepreneurs get hand growing profits

Written by Susan Danseyar on May 26, 2015
Advertisement 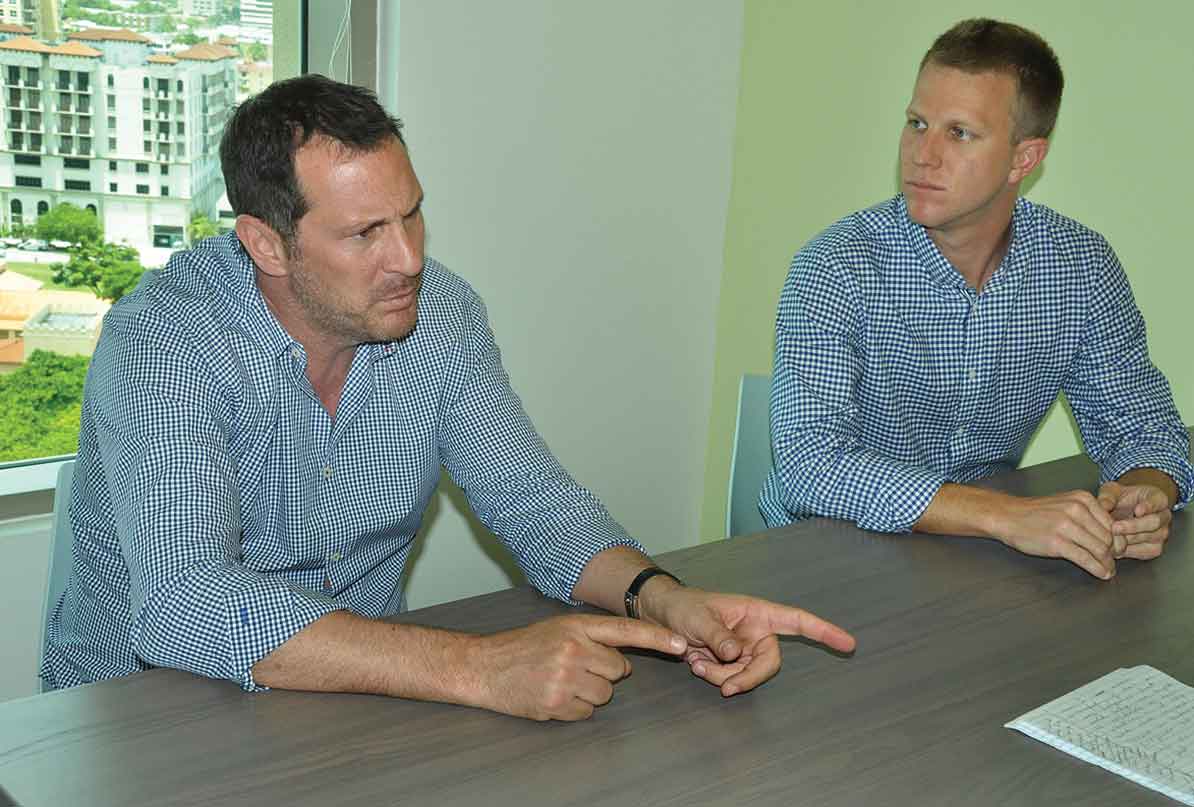 As CEO of a new company, Michael McCord felt he was trying to do everything but not performing well enough until he was advised through his association with Endeavor Miami that using his unique talents was the better approach.

Today, Mr. McCord is no longer a “jack of all trades and master of none” for LearnerNation, the software performance optimization company he established with partners in January 2012. He attributes learning the important lesson of how to scale, along with countless instances of invaluable assistance, to the mentors he meets through this first US affiliate of Endeavor Global Inc., a worldwide non-profit that aims to transform economies by nurturing a culture of entrepreneurship.

Endeavor Miami, headquartered in Coral Gables, launched in September 2013 after the John S. and James L. Knight Foundation had the idea to bring a branch of the global organization to South Florida and provided a $2 million grant to get it started.

“It’s important to build a network for entrepreneurs to succeed and foster the next generation,” said Matt Haggman, Miami program director for the Knight Foundation. He said Endeavor Miami is boosting the city’s emerging community of entrepreneurs and innovators.

He pointed to the countries represented on the board and managing director post: Chile, Peru, Venezuela, Colombia, Cuba and Mexico.

Endeavor’s model has been proven successful, with entrepreneurs seeing significant job and revenue growth through its support, Mr. Haggman said.

There are 1,082 Endeavor Entrepreneurs around the world, representing 684 countries in 23 markets, said Laura Maydon, the managing director of Endeavor Miami. The Miami chapter currently has eight, representing diverse companies, and is looking for even more variety, she said, in health care, medical devices and fashion or creative industries.

It’s vital to put South Florida entrepreneurs in touch with mentors who can help them think bigger, refine their business plans, gain access to capital and multiply their influence, Ms. Maydon said.

The most important objective is that the entrepreneurs stay here, create jobs and – ultimately – inspire others, she said.

“The mentors provide focus, confidence and the understanding you’re not alone,” said Mr. McCord, who became an Endeavor Entrepreneur in August 2014. His line of work is essentially solitary, Mr. McCord said, and mentors showed him a path to follow where he didn’t have to “bottle up” but could connect with people for discussion.

The designation is awarded after a rigorous selection process that takes four months to a year, said Greg Rothman, manager of entrepreneur selection and growth for the Miami chapter.

He said the candidates undergo an initial discussion with Endeavor Miami staffers who determine if the entrepreneur is a business leader and works for an enterprise ($1 million and over) already in the market wanting to scale (i.e., creating more jobs or extending wealth), and at an inflection point of making strategic decisions such as whether to expand internationally or go deeper domestically.

“Our mission is to look for high-impact entrepreneurs who can take their companies to the next level of success and build an ecosystem,” Ms. Maydon said. “Endeavor has proven entrepreneurs create a multiplier effect and help grow the community.”

Should staff members feel a candidate meets criteria, they arrange second-opinion reviews with up to six panelists who are either members of the board of Endeavor Miami or part of its member network, including industry leaders or venture capitalists who have usually exited their businesses. After a number of meetings that include review and feedback, those who are accepted by the panels move on to an international panel where they meet with six business leaders from around the world.

“You don’t realize the magnitude of Endeavor until you go and see the global reach,” said Scott Harris, president and CEO of Deliver Lean, a 3-year-old business that cooks and delivers all-natural, portion-controlled meals to companies daily. He became an Endeavor Entrepreneur in October 2014, and said going through the selection process was a self-reflective experience that created a lot of thought.

“There’s no roadmap for navigating through business that’s changing by the minute,” Mr. Harris said. “You can’t put a price tag on leaders of corporations sharing their insights.”

He said being an Endeavor Entrepreneur gives him access to people he might otherwise never meet and he has already learned a tremendous amount, including which was the right software development company for his business.

“Endeavor is a sounding board,” Mr. Harris said. “It gives you access to brilliant minds that have been through what we’re experiencing.”

Mr. McCord said as an Endeavor Entrepreneur, he receives help in the best way possible. “There’s so much out there on a global scale that can connect you,” he said. “This opens your mind, your world, and it’s through real life experience – not a book.”