Advertisement
The Newspaper for the Future of Miami
Connect with us:
Front Page » Communities » 6 win Gold Medal Awards, Hertz honored

Written by Production Department on May 5, 2015
Advertisement 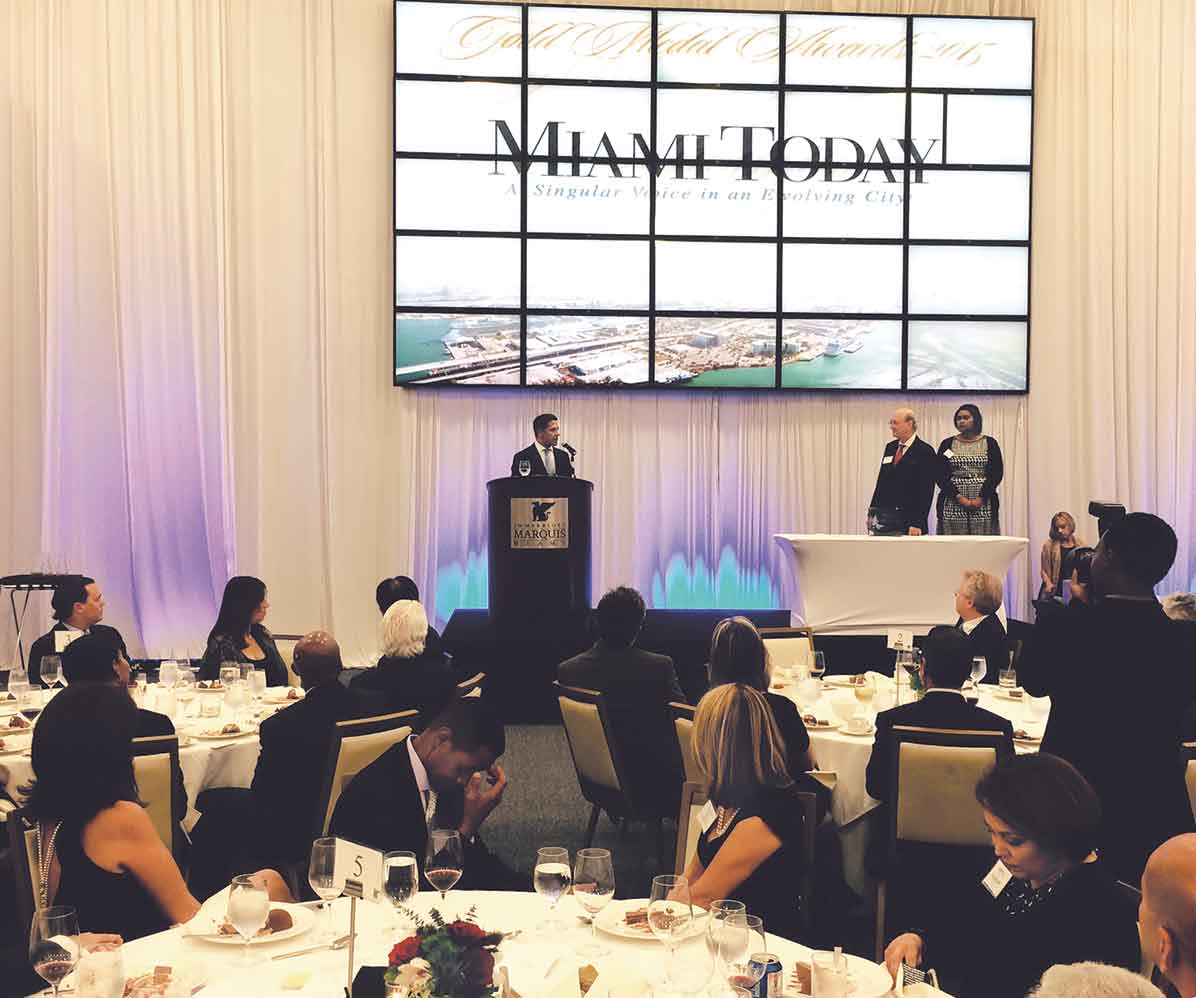 Long-time executive and leader Arthur Hertz accepted the Lifetime Achievement Award for his work in the community.

Eight judges selected the Gold Medal Awards winners from among victors in local and national competitions that were held last year – only top-level award recipients were eligible for consideration for the Gold Medals. Miami Today and dinner sponsor BNY Mellon Wealth Management chose Mr. Hertz for the Lifetime Achievement honor.

In balloting for the top organization, the judges selected Fairchild Tropical Botanic Garden and its Fairchild Challenge for the Gold Medal. The Fairchild Challenge, an environmental science initiative, includes in its program 273 public and private schools and 130,000 students across South Florida.

Alberto Carvalho, superintendent of the Miami-Dade County Public Schools, received the Gold Medal for an individual based on multiple honors received last year and shortly afterward planned to board a plane for Washington, DC, to receive yet another national honor. Mr. Carvalho accepted his Gold Medal from Christopher Gandolfo, senior vice president of sponsoring Swire Properties.

InterContinental Miami Hotel won the Silver Medal for an organization based on an array of community involvement, including being the largest purchaser of renewable energy credits in the state and using its Green Engage System to focus on sustainability. General Manager Robert Hill accepted the award from Marie Bertot of sponsoring Florida Power & Light, noting that while he was receiving the award, 600 employees of the hotel had earned it.

The Silver Medal for an individual went to Dr. Rosany Alvarez, a 24-year Miami Dade College veteran who is a professor of mathematics at its Inter-American campus. She is a two-time winner of the college’s highest faculty honor, the MDC Endowed Teaching Chair.

In presenting the Silver award, Thomas Julin of sponsoring Hunton & Williams law firm noted that he had done his homework and checked on Dr. Alvarez’s ratings by her students, learning that they were top level. Her sister, Ana Cueto, accepted the award in her behalf, joined by other members of the family.

The Bronze Medal for an organization went to Healthy West Kendall, launched in 2013 as a community-wide initiative at West Kendall Baptist Hospital to address the needs of the area’s 300,000 residents – a figure underscored by William Holly, president of Patton Commercial Real Estate, as he presented the award to Michelle Mejia and other team members.

The Bronze Medal for an individual was presented to Karelia Martinez Carbonell, who last year received the Junior League of Miami Foundation’s inaugural Visionary Award that recognized contributions of vision and leadership. She was presented the award by Ana-Marie Codina Barlick, CEO of sponsoring Codina Partners.

Mr. Hertz, in accepting the Lifetime Achievement Award, used his appearance at the podium to asked the audience to work toward solutions to traffic and transportation problems that increasingly bedevil the region.

He was recognized for long-time service on the county’s Public Health Trust, the University of Miami’s Board of Trustees, the Jackson Memorial Foundation Board, Miami’s Off-Street Parking Board, the direction of the Mitchell S. Wolfson Sr. Foundation and a long list of public roles and awards that he has received. He is currently chairman, CEO and controlling shareholder of Wometco Enterprises.

The judges were asked to base their selections on:

•The importance of achievements for which nominees had received awards in the past year and the stature of the recognizing organizations.

•The long-term impact of the honorees’ achievements on this community.

Miami Today 16 years ago established the Gold Medal Awards to honor The Best of the Best, choosing among those that already had received from peers top honors in a vital category in the prior year.

Trophies were presented after an invitation-only reception and dinner for 100 guests on the 19th floor of the JW Marriott Marquis downtown, which has been the home of the past four dinners.

Past Gold Medal Award winners, competition judges and leaders in business and education, as well as an international delegation of consuls general, attended to salute the honorees.