Advertisement
The Newspaper for the Future of Miami
Connect with us:
Front Page » Business & Finance » 11 new downtown hotels will nearly double rooms 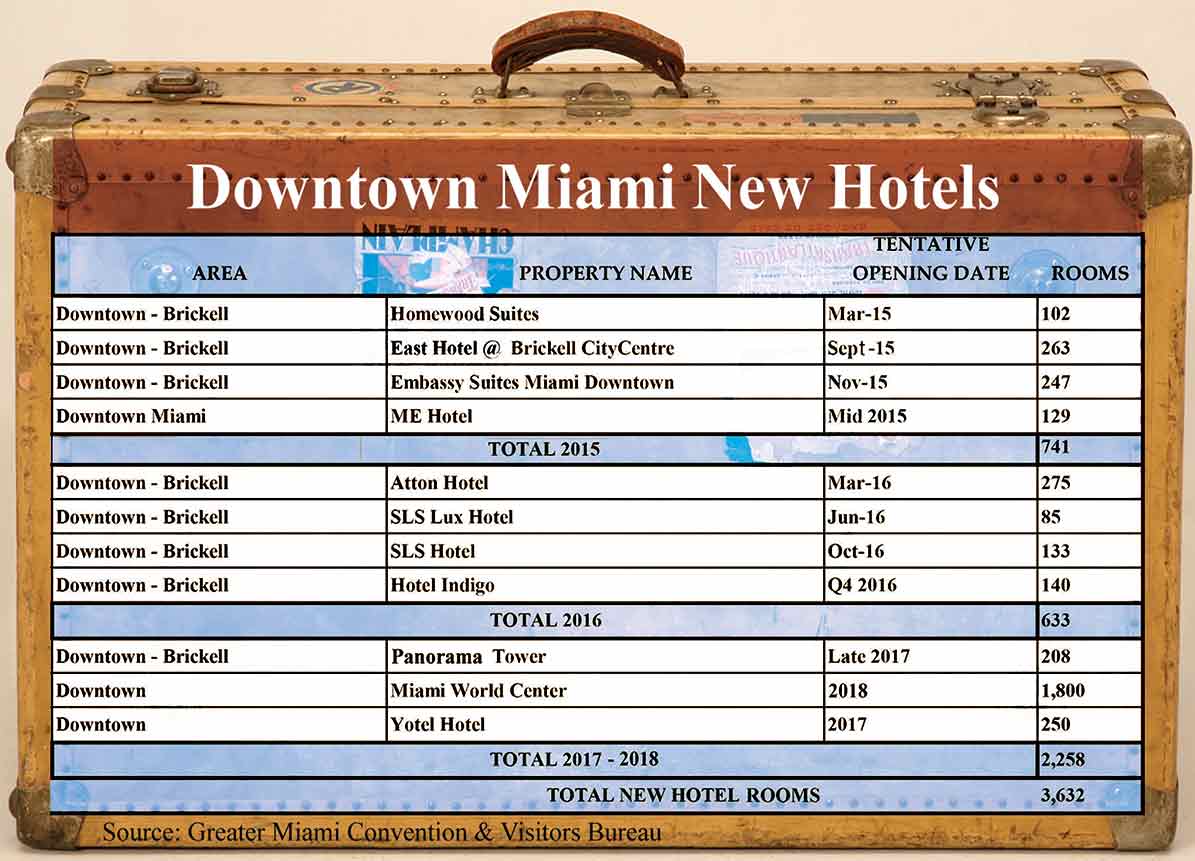 If all are built as planned, 11 new hotels going up in Miami’s central business district over the next three years will nearly double the number of hotel rooms – from the current 3,632 to 6,640.

Of these, the largest, and also furthest out from delivery, is the Marriott Marquis adjacent to the Miami Worldcenter complex in the Park West district.

The 1,800-room Marriott Marquis is one of the biggest projects his firm has ever tackled, said Igor Reyes, partner in architectural firm Nichols Brosch Wurst Wolfe & Associates.

“It is actually between Worldcenter and All Aboard Florida, and will have a big role in connecting those two projects. It’s the hotel biggest project in South Florida. Many hotels downtown and in Brickell cater to business travelers, but the Marriott Marquis will be more tourist-oriented, he added. “We’re getting to the point that we have enough going on downtown that we can start attracting tourists. We have reached critical mass.”

Potential guests include cruise passengers, who Mr. Reyes called “an untapped source. It seems like we could get them to stay a couple of days and enjoy the museums and other activities if they had a substantial hotel to stay at.” A Metrorail station adjacent to the hotel site offrers transportation options.

Nevertheless, conventions and conferences haven’t been ignored. The hotel includes 400,000 square feet of meeting space and a 100,000-square-foot exhibit hall on the ground floor. “You could easily fit a jumbo jet inside there,” Mr. Reyes said. “It’s pretty immense.”

He said the hotel will generates jobs for an area that has been disadvantaged. “Just to run an 1,800-room hotel requires a huge staff; we’re talking a lot of jobs being pulled into the area, not including construction jobs.”

He predicts the hotel will come online sometime in 2018 if construction starts before the end of this year. “This will be quite transformative.”

The hotel, which is set to open at the end of this year, is to offer not only 263 rooms but also 89 fully serviced one- to three-bedroom apartments with kitchens. It will be steps from a 500,000-square-foot retail center anchored by Saks, which also features a Cinemax premium dine-in movie theater, and will be in the thick of Brickell’s vibrant restaurant scene.

Because a Metromover station is inside the complex, guests will be able to come directly from the airport to the hotel simply by making a transfer at Government Center.

Amenities inside the hotel include a sumptuous fifth-floor pool deck with cabanas, a 200-seat outpost of famed South American restaurant La Huella, and a club, Sugar, on the 38th floor. On the top floor is a 3,000-square-foot ballroom and some meeting space.

“It’s a different concept, and will offer extraordinary views,” Mr. Cortabarría said. “Lavish meeting rooms overlooking the city – this is not easy to find in Miami.”