Advertisement
The Newspaper for the Future of Miami
Connect with us:
Front Page » Arts & Culture » New creations display art of parking 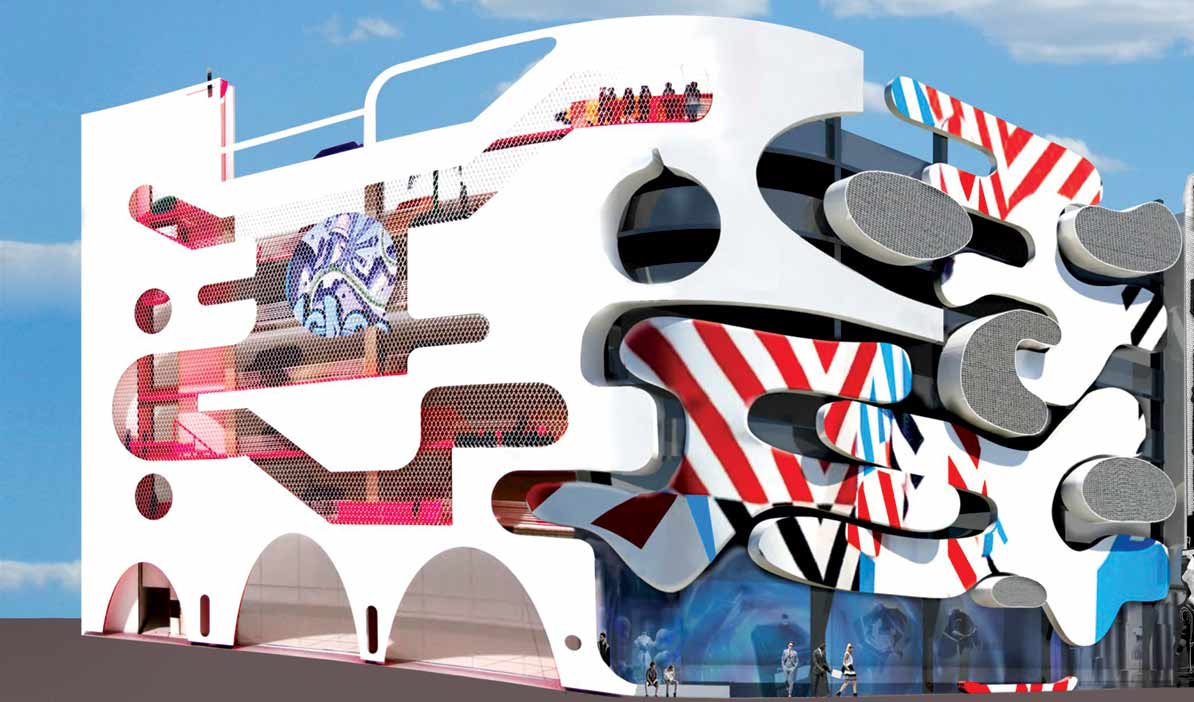 It will be like no parking garage you’ve ever seen.

To call it special or unique minimizes the significance of this avant-garde structure.

Called Museum Garage, the planned structure seems more of a showcase for artists than a vessel to hide rows of cars.

And it should be no surprise that it’s planned to rise in Miami’s booming Design District.

Museum Garage is one of several parking facilities being built by the Dacra company, chiefly responsible for transforming land north of I-195 into a luxury retail destination, where fashion, art and architecture are exploding.

Museum Garage, a 7-story garage with ground floor retail and room for 800 vehicles, is planned by Dacra for a stretch of Northeast 41st Street.

The innovative project earned compliments from the city’s Urban Development Review Board in September.

The proposed garage includes design elements that encroach into the right-of-way above the ground floor level. The developer gained the approval from the board to allow those encroachments.

Neisen Kasdin, representing the developer, said various designers are working on the building and it will have diverse 3-D façades.

The architectural firm of Keenen/Riley is overseeing design of Museum Garage.

Terence Riley, formerly director of the Miami Art Museum, told the board his company was asked by Dacra to curate the façade of the planned garage, with unique designs that would stretch the length of the building and wrap around the corner.

Draft renderings shown to the board in September showed proposed façades from Work Architecture Co. of New York, Nicolas Buffe of Tokyo, Clavel Arquitectos of Murcia, Spain, and J. MAYER H. and Partners of Berlin.

The proposed façades included: a wall of car tops from recycled autos; an ornate panel of scrolls, crests, symbols and Egyptian figures; a wall of windows framed by flower boxes; a panel of candy-cane like fingers intertwined among small islands; and a corner section dubbed “the ant farm” that features a series of cutout shapes exposing the activity inside, including stairs and walkways for customers.

Design board member Neil Hall said he wanted to “applaud the idea” of turning a parking garage into a canvas for artists and designers. He particularly liked the ant farm design.

“It seems we could find artists that are local to be part of this exciting project,” he said.

Along with the proposed Museum Garage, work is already far advanced on another garage that showcases noteworthy artistic design.

Rising in the Shadow of I-195, City View Garage is hard to miss.

Currently the southeastern end of the multi-story facility is covered with a sea of aluminum panels, a façade designed by firm Iwamoto Scott.

The main body of the building is a parking structure, above a level of retail storefront and will include a small six-story office block.

Iwamoto Scott’s portion of the façade wraps around the main corner of the garage and encompasses an elevator lobby, exterior stair and the office block. The façade forms a tessellated mural that strategically conceals the parking slabs behind while allowing for natural ventilation.

Iwamoto Scott is an award-winning architecture and design firm established by Lisa Iwamoto and Craig Scott in 2000.

Leong Leong has been commissioned to design the western façade of the City View Garage, which explores the relationship between material efficiency and atmospheric effects. The technique of cutting and folding is applied to a series of gold titanium-coated stainless steel panels, which generates a shimmering visual pattern, evoking a foliage-like pattern.