Advertisement
The Newspaper for the Future of Miami
Connect with us:
Front Page » Government » Governments battle to control Dolphins stadium 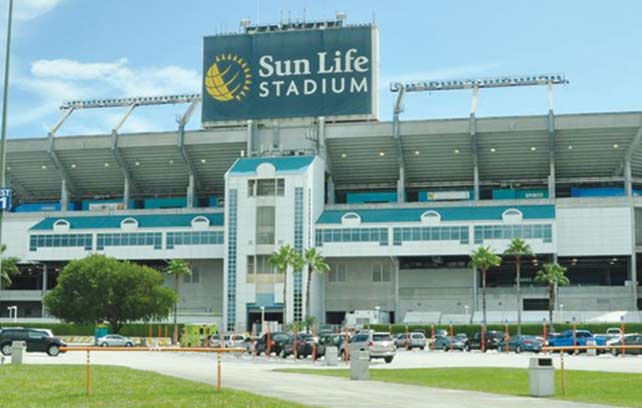 As football teams battle it outinside Sun Life Stadium this season, another battle brews – this one for the stadium.

At issue: Who should control zoning and permitting for the stadium and surrounding land, the City of Miami Gardens or Miami-Dade County?

Sun Life Stadium is within Miami Gardens in Northwest Miami-Dade. When the city incorporated in 2003, officials agreed the county and not the new city would keep jurisdiction over the 75,500-seat stadium, home to the Miami Dolphins and the University of Miami Hurricanes.

For a while, Miami Gardens has said it’s time for the city to take zoning and permitting control of the stadium and surrounding land. The city has sued the county to gain that control, arguing that the city’s charter calls for transfer of control to the city at the end of 2012.

“I believe the city is entitled to process all zoning and all permitting over every inch of the city. None excluded,” Miami Gardens Mayor Oliver Gilbert III told county commissioners recently.

On Sept. 3, Miami Gardens gained yardage – but scored no touchdown. The county commission agreed Miami Gardens will control land surrounding the stadium. The city and the county are to sign an accord that would give Miami Gardens the right to issue building permits for land around the stadium.

“I think it’s progress, but we are not where we would like to be,” Mayor Gilbert told Miami Today.

County commissioners stopped short of approving a part of the resolution that called for keeping zoning and permitting control of the stadium with the county but giving the city the right to make recommendations to the county on future land-use applications for the stadium.

That proposal was a compromise for the city and the county, Mr. Gilbert said, because the city ultimately wants full control of the stadium.

“They [Miami Gardens] are not asking for anything any different than what has been given to the City of Miami with the Marlins Stadium and the AmericanAirlines Arena. Noting different,” said Commissioner Barbara Jordan, who sponsored the legislation.

“It would be a retroactive kind of thing in this case,” Ms. Sosa said.

The battle over stadium land-use control comes shortly after the county agreed to pay incentives to the Dolphins’ owners for bringing major events, such as a Super Bowl, to the stadium. The Dolphins’ owners, who also own the stadium and surrounding properties, plan a $350 million stadium renovation.

Mr. Gilbert said the city doesn’t want to interrupt that agreement or the renovation process. But, he added, the city does want to carve out a final solution on stadium jurisdiction.

“Whether it’s this board coming to an agreement with their mayor and the city or whether it’s the court, there will be resolution to this matter. There has to be,” Mayor Gilbert said. “We would love not to fight. But we are prepared to.”