Advertisement
The Newspaper for the Future of Miami
Connect with us:
Front Page » Business & Finance » Merge business groups, Nero urges 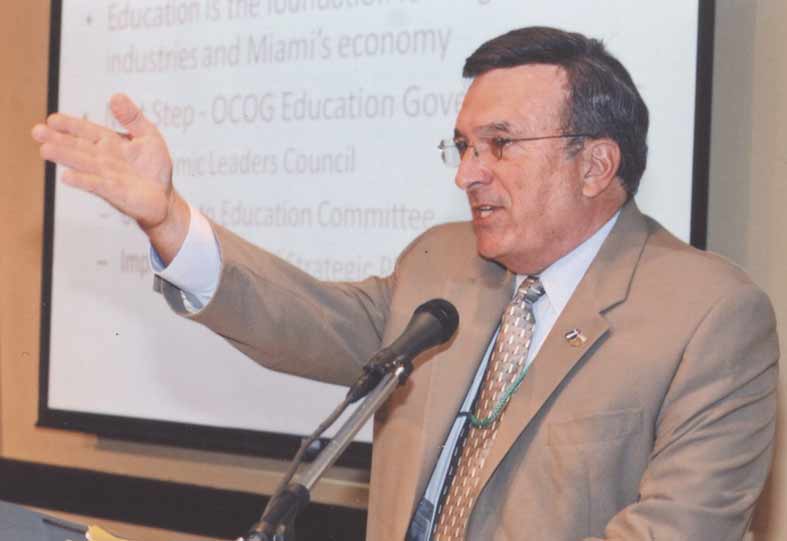 The Beacon Council needs to be more independent and work with the public sector as equals, particularly by shifting its funding sources to receive the larger share from the private sector as opposed to the 70% it now gets from the county, says Frank Nero, former president and CEO of Miami-Dade’s economic development organization.

“I think the [Greater Miami] Chamber, the World Trade Center, the [Greater Miami Convention & Visitors] Bureau and the Beacon should be under one umbrella. I think it should be financed as much as possible by the private sector so they write one check. Therefore, they can collaborate and cooperate without competition,” Mr. Nero said in a long sit-down interview with Miami Today, his first full interview since he left the Beacon Council in March.

The Beacon Council would need a partnership with the public sector, he said, but both sides would have to be equals. “If 70% of your money is coming from the public sector, you’re not equal – they’re going to call the shots. It’s very difficult. I think the private sector needs to step up to the plate.”

The Beacon Council should be more aligned with the mission that Enterprise Florida has, Mr. Nero said. Even though the state’s economic development organization was designed based on the Beacon Council, he said, the state organization is responsible for both tracking investment and promoting trade.

“In Miami-Dade that’s separated,” he said. “I had submitted a proposal to the mayor to absorb the ITC [International Trade Consortium], but I never got a response.”

Mr. Nero, who was ousted by the board in March after 17 years on the job, said he was very pleased that the Beacon Council had hired a professional economic developer, Larry Williams, as president and CEO. Mr. Williams started a month ago.

“I don’t know Mr. Williams but I know of him and I think he’ll do an excellent job. I think he’s going to have his hands full,” Mr. Nero said.

“When I signed my last contract,” he said, “the idea was that I would transition out and help train that person. My contract was set up to do just that.” He said he’d hoped that when he left the Beacon Council would pick as his successor someone who represented the diversity of the county.

“I had recommended some local people who would’ve been excellent for the community. You want someone that reflects the diversity. That’s my only thought.”

In terms of future challenges, Mr. Nero said the “hot button” is now entrepreneurism, but to put all the Beacon Council’s eggs in that basket would be a mistake for the county.

“It should be supported, but it’s a long-term plan,” he said. “The community now needs jobs that offer higher pay. It’s not either or. This community’s unemployment rate is still unacceptably high – we have a brain drain.”

Mr. Nero talked about the importance of One Community One Goal, a program that he reinitiated, and the leadership that has arisen in the education sector. “[Miami-Dade School Superintendent Alberto] Carvalho is a hero, the school board is now cohesive,” he said. He said that if One Community One Goal does nothing more, it will at least have raised the profile of education in the county.

Diversifying industries, such as what One Community One Goal promotes, is what the community should keep its focus on, he said, as opposed to pursuing the possibility of destination casino gambling. This year he has worked with the Orlando-based No Casinos organization to warn about what he sees as the negative effects of approving the legislation.

“I don’t think that’s an industry that we need here,” said Mr. Nero, who drew criticism from some mega-casino supporters for speaking out on the issue while he was Beacon Council CEO. “It could hinder the diversification of industries in Miami-Dade County. Tourists today spend more money here than the average tourist spends in Las Vegas. They [casinos] need us more than we need them. They wish to capitalize the excellent tourism base that we have.”

Based on his research, Mr. Nero argues that the gambling industry doesn’t create wealth but rather transfers it from local businesses to the casinos themselves.

He pointed to gambling in Florida, the pari-mutuels and casinos on Native American reserves.

“The state would be better served to deal with the regulatory side of the gambling we already have before we add more,” he said, and added that the original proposal by the Genting Group – which purchased the former Miami Herald site for a casino resort – was for casinos to pay 10% as a tax rate.

“But pari-mutuels today pay almost a net of 60%,” he noted. ‘What’s going to happen to them? You’ll have the net loss of jobs and economic development that local casinos and pari-mutuels already bring to the community.”

Mr. Nero said there is also a social cost to destination gambling. A study by the University of Illinois, he said, estimates that gambling costs $289 in social costs for every $46 of economic benefits.

“It’s also been shown that wherever these destination casinos are you have a rise in alcoholism, drugs, prostitution and addiction to gambling,” he said. If the community wants casino gambling, he said, it should go in with its eyes open because it can’t go back.

Besides his work at No Casinos, Mr. Nero is doing pro bono work in Haiti with the National Basketball Retired Players Association.

“Our job is to help Haiti develop sports within the community and how the federal sports associations can leverage that to create revenue for Haiti,” he said. “I’m working on helping them showcase investment opportunities there.”

He has also started his own business: Beacon Global Advisors. “I’m affiliated with the word and I’m proud of what I accomplished. This company is twofold: I’ve become a side consultant to help companies who are looking to locate or expand primarily in the state of Florida, and advise local communities and counties on how to attract investment,” Mr. Nero said.

Through his company, he is also consulting with Italian company Di Bari Innovation and Design to help it position itself in the US and open a studio in Miami Beach, which he said will be officially launched after Jan. 1.

There are two more projects with start-ups in the works for Mr. Nero, which he plans to announce next year.

Lastly, he is working with a South Florida university, whose identity he prefers to keep to himself for now. “I’m working on a proposal I submitted that I feel very committed to. It has to do with professionalism of this industry and making sure that people know how to do economic development. It would be for elected officials, people in the field, great outreach in Caribbean and Latin America. It would be an interdisciplinary approach headquartered at a university here,” Mr. Nero said.

The idea is for him to create the content. He plans to announce details toward spring.

“I don’t want another job,” he said. “I’ve had offers in economic development in other parts of the country, but I want to be here, I want to be more independent and create some equity and some kind of a legacy.”