Advertisement
The Newspaper for the Future of Miami
Connect with us:
Front Page » Business & Finance » Port trolleys would roll shoppers downtown 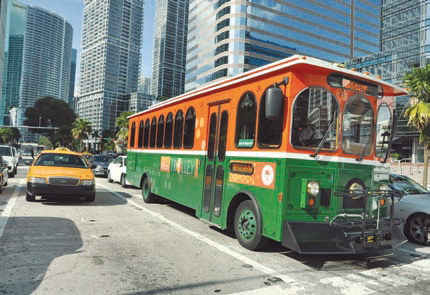 Directors of Miami’s Downtown Development Authority are backing a move to extend the Coral Way route of the City of Miami trolley to PortMiami, on the theory that it will provide a bridge for cruise ship workers and passengers into downtown.

Having free, front-door service to the cruise ship terminals will probably entice visitors to explore, “thus increasing business in downtown and providing cruise travelers with an expanded and memorable Miami experience,” said an authority memo.

The trolley already runs from Coral Way to downtown’s Flagler Street, and previously the eastern terminus of its route was the port administrative building, where few, if any, riders need to go.

“That’s kind of government-think,” said board member Neisen Kasdin, who is also office managing shareholder of the Akerman Senterfitt law firm. “This puts the trolley where the employees and passengers actually are.”

“This also addresses issues the hotels have had with taxis bringing people from the port,” said board member Alvin West, who is also senior vice president and chief financial officer of the Greater Miami Convention & Visitors Bureau. “It’s a perennial problem.”

“Those cruise ships don’t want that trolley there,” agreed board member Jose Goyanes, who is also owner of Metro Beauty Center, Churchill’s Barbershop and Tre Italian Bistro. “They want the passengers to spend all their money on the ship.”

Miami must approve the change. Then Miami-Dade County will get a say, if the expansion involves more than 10% of the route, which board members doubted it would.