Advertisement
The Newspaper for the Future of Miami
Connect with us:
Front Page » Government » Bus tracking system rolling in 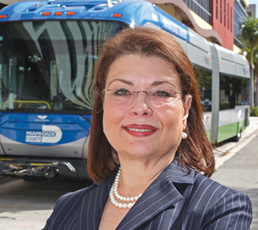 The deal with Clever Devices Ltd. would use transportation surtax funds to purchase a computer-aided dispatch system to give riders real-time tracking information.

Train passengers already have this service for Metrorail, but those who ride the bus must still rely on scheduled arrivals, which can be unreliable based on traffic congestion and other factors, members of the transportation trust said.

“It’s a wonderful thing to have,” said board member Linda Zilber. “With everything going on the way it does, with buses breaking down… This gives the county the opportunity to see just what’s happening where. So I think it’s an excellent thing.”

The proposal, now headed before the county commission, would create a tracker compatible with smart phones and computers.

“This is absolutely one of these great items. It’s an expensive item but it’s a great item,” said Miami-Dade Transit Director Ysela Llort. “What it’s intended to do is give us a system of smart buses.”

The $17,680,362 deal would also fund installation of up to 75 solar signs at bus shelters in priority areas and high-volume corridors. These signs would display arrival information for passengers’ convenience.

“What we’d like to be able to give the public is real-time approaches of the buses. We know that this makes a big difference to their ability to have a comfortable experience on the buses,” Ms. Llort said. “There’s nothing worse than waiting in the rain and in the heat for a bus that’s been delayed in congestion… and it’s very difficult to find out where they are for the rider. This will solve that problem.”

At least one other area government has a tracking system on a successful transit system. Miami is already using GPS devices, developing technology to allow iPhone and Android users to locate trolleys using their cell phones.

And that’s not all that will be available to trolley users in coming months, Miami Today has reported.

For the county the hope, Ms. Llort said, is to use trackers system-wide.

“We think this moves us a long way to a smart system,” she said of the proposed tracker deal.