Advertisement
The Newspaper for the Future of Miami
Connect with us:
Front Page » Government » Marlins still adding stadium construction expenses to list 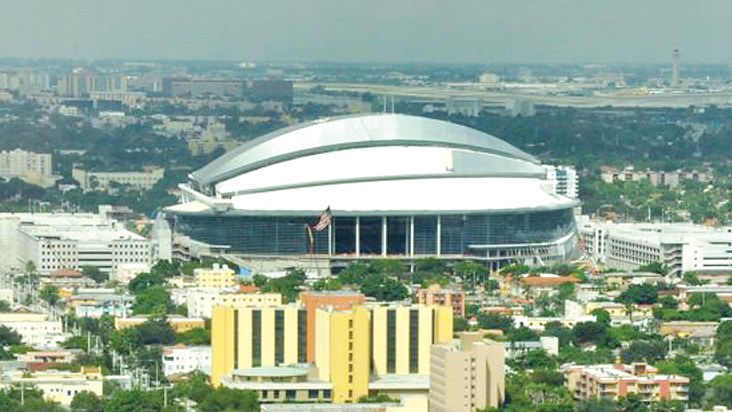 The Miami Marlins are continuing to submit their stadium-related expenses to county officials to be counted toward their share of construction costs under the controversial deal that built Marlins Park in Little Havana.

So far, the county is contesting about $4.2 million in expenses submitted by Miami’s Major League Baseball team, and the disputed expenses will go to arbitration for a resolution, Jose Galan said this week.

“The county’s position is that these expenses are not project-eligible expenses,” he said.

Mr. Galan is acting director of the Miami-Dade County Internal Services Department’s Real Estate Division, which is reviewing the team’s expenses to determine if they comply with the stadium’s construction administration agreement.

The mostly publicly-financed stadium opened last year at the former site of the Orange Bowl.

Through a deal worked out between the team’s management and county officials, most of the money to build the stadium and related parking garages was raised through the sale of county bonds and City of Miami bonds.

“The Marlins continue to submit their expense reports, which are reviewed by the county, for their remaining financial obligations to the project,” Mr. Galan said.

Meanwhile, the county and the Marlins have come to agreement on a number of the expenses the team had submitted and previously were being questioned by the county.

As a result, according to Mr. Galan, the team has agreed to remove about $720,000 in expenses from the lists it had submitted to the county, allowing arbitration to be avoided on those items.

Dates have not yet been set for arbitration on the $4.2 million in expenses that remain in dispute.

“Unless the Marlins decide to remove these items from the list of expenses to consider for the project, the county will challenge those expenses,” Mr. Galan said about the $4.2 million.

He added that an ongoing investigation by the US Securities and Exchange Commission of the bond sales that financed the stadium has had no impact on the county’s review of the expenses the Marlins have submitted.

The SEC’s Miami Regional Office had issued subpoenas to the county and the city, directing them to supply extensive records of meetings and discussions about the bond sales between government officials and staffers, team representatives and private professionals, as well as other related documents.

The SEC, meanwhile, has refused to confirm or deny the investigation, saying the agency’s policy is not to comment on such matters unless charges are announced or a settlement is reached.

Meanwhile, the Marlins have been having a tough year on the field.

As of Tuesday, they were in last place in the National League East division with 58 wins and 99 losses, the second-worst record in Major League Baseball with five games remaining in the regular season. Only the Houston Astros in the American League West division had a worse record, with 51 wins and 106 losses.

The Marlins also have ranked second to last in Major League Baseball this season in attendance, drawing an average of 19,259 fans through 76 homes games, according to sports website espn.com. The retractable-roof stadium has a capacity of 37,000. Only the Tampa Bay Rays in the American League East division have had a lower attendance at home games with an average of 18,645.

County and city officials, meanwhile, were criticized for giving away too much in the deal to build a new stadium for the Marlins, which allowed the team to move to Miami from Sun Life Stadium in Miami Gardens, home of the National Football League’s Miami Dolphins.

Together with its parking garages, Marlins Park cost in excess of $640 million to build, including $515 million for the stadium itself. However, when fully paid off over the next three-plus decades, the total cost in tax revenue reportedly will come to more than $2 billion, with some calculations running as high as $3 billion.

Under the agreement, the county owns the stadium and leases it to the Marlins, who get to keep all stadium-related revenues.

Regarding the upfront construction costs, the county’s share of the bill reportedly came to $384 million, with the Marlins providing $131 million and the city providing $127 million, mostly for the four parking garages.

Marlins owner Jeffrey Loria, meanwhile, has said the team’s share of the project actually came to more than $161 million, plus some costs related to the parking garages.