Advertisement
The Newspaper for the Future of Miami
Connect with us:
Front Page » Business & Finance » County Snickers At Snickers – M&Ms Too

County Snickers At Snickers – M&Ms Too 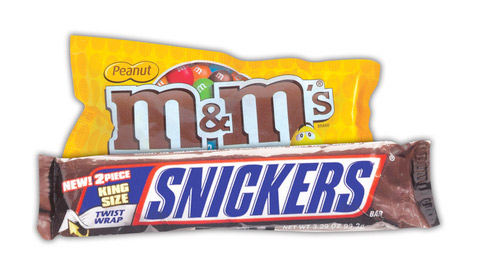 Healthy snacks battled Snickers bars, Raisinets and Peanut M&Ms for space in county vending machines last week, with a commission committee deciding that 20% of slots should be required to vend healthy snacks.

Noting that she had lost weight over the past two years but couldn’t find healthy snacks in the county machines, Commissioner Audrey Edmonson by a 4-1 vote got the Health & Social Services Committee to agree to require the vendor for the county’s web of machines to add something healthful.

Under the resolution, the healthier products would have to be competitively priced with the junk food that sits beside them, removing temptation to save at the cost of calories and fat.

In the committee, however, the drive for healthier eating had to battle with concerns for a free market, where the county’s sole vendor would have sole discretion to decide what would sell most profitably.

“I think the market should decide what goes in those machines and not the county government,” said Lynda Bell, who cast the sole vote against the move to require some healthy snacks. “I think whether it’s in a college campus or a building down here this should be market driven and not “us’ driven.

“I look at New York, where Mayor [Michael] Bloomberg is not allowing people to buy large sodas and I think that’s absurd… I don’t want the county to fall into becoming the nanny of what people eat. I get what you’re trying to do because I like healthy options myself. I also like a Snickers bar.”

Ms. Edmonson, who has slimmed down, said her own needs triggered the legislation.

“I came up with this from a county machine, and I think we all know that I lost a considerable amount of weight two years ago” — (“and you look good,” Ms. Bell interjected) — “and I had no options for healthy food. It was all junk food, and I think people should have that option….

“We should not restrict these vending machines to just the junk stuff, because I use them and I’ve had to use them recently and there’s nothing I could get in them.”

Ms. Bell suggested Ms. Edmonson just call the vendor and say “”I want raisins and I want nuts instead of Raisinets and Peanut M&Ms.’ I believe that the vendor will put them in there…. It’s not a mandate that they only have the junk stuff in there. It’s what the people purchase.”

Commissioner Jose “Pepe” Diaz, who supported the move for some healthier snacks in machines and also lost weight recently, walked the middle line: “Healthy is great and we’re trying to do our attempts to get as healthy as possible” so he favored the move to healthier food if vendors keep some “stressful day food — junk food.”