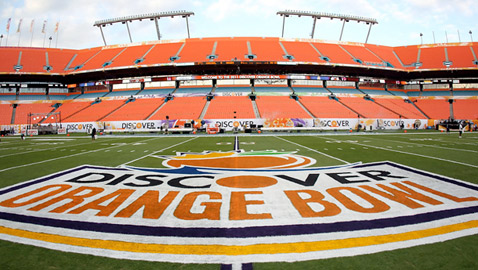 By Meghan Mangrum
Without a Bowl Championship Series National Championship game next year to help bolster ticket sales, the Orange Bowl Committee is approaching the 2014 bowl game with realistic expectations as it awaits a new college championship game system to take effect in 2015.

“Our expectations aren’t quite as high as they were,” said Dawson Hughes, vice president of ticket sales & operations. “We have expectations that are in line with the past three to four Orange Bowls.”

Though the Orange Bowl Committee claims the 2013 bowl game was a sell-out, hundreds of tickets were available at reduced prices, and it is likely that many Orange Bowl tickets were bought just for the ability to purchase a BCS National Championship ticket.

Final attendance counts for the game came in at about 72,000, below the stadium’s capacity of about 76,000. This was in line with the trend over the past several years of struggling ticket sales and attendance.

The Orange Bowl Committee hopes that the new college championship match-up system will bring an increase in ticket sales and fans of the Orange Bowl will be more excited for games.

Instead of a guaranteed BCS National Championship game every four years, the new system promises a semi-final game every three years.

“We are going to have a game that contributes to the national championship,” said Orange Bowl spokesman Larry Wahl. “The other piece of the new model is that in those two or three years we are now matching up an ACC Champion with an SEC, Big 10, or with Note Dame.”

Ticket sales for the 2014 Orange Bowl are currently in the renewal stage, and Mr. Hughes said the renewal rate this year is 100% higher than four years ago. Tickets will go on sale officially in August for the night game on Jan. 3, 2014. The two schools will receive the set 35,000 tickets between them for the game.

“Over the past few years we haven’t had the best travel dates,” Mr. Hughes said. “This year we have a Friday night game.”

Looking beyond the 2014 Orange Bowl, Mr. Hughes said patrons have been very receptive of the new system and the chance to have better pair-ups more often featured at Sun Life Stadium.

“There will be better match-ups on better dates over the next three years,” Mr. Wahl said.To read the entire issue of Miami Today online, subscribe to e-MIAMI TODAY, an exact digital replica of the printed edition.