Advertisement
The Newspaper for the Future of Miami
Connect with us:
Front Page » Profile » Oscar J. Braynon: Steers the trust that oversees transportation tax spending 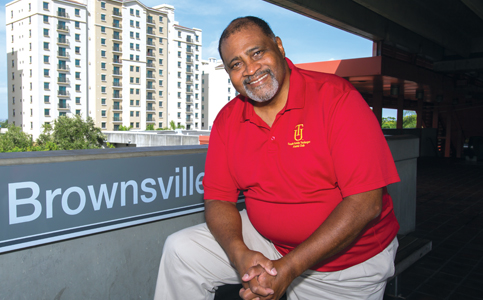 A native of South Florida, with a family that has been in the area since the 1880s, Oscar Braynon, chair of the Citizens’ Independent Transportation Trust, works on making improvements in transportation in the community in which he and his family have been raised.

First appointed to the trust representing District 1 in 2016 by former Commissioner Barbara Jordan, and then reappointed by Oliver G. Gilbert III., Mr. Braynon chairs the 15-member body created to monitor and oversee the People’s Transportation Plan funded with the half-penny sales surtax voter approved in 2002.

The group reviews all major purchases and makes sure they comply with the intent of the plan to create rapid transit and improve overall transportation and roadways throughout Miami-Dade County. Mr. Braynon works closely with the executive director to set the agenda and represents the body in official events.

His career in the county dates to 1996, when he was recruited by Commissioner Barbara Carey-Shuler while he was running an aircraft charter company and doing business development for an engineering company. “Coming to the county was more of a happenstance,” he said. Mr. Braynon also worked with Ms. Carey-Shuler’s successor, former Commissioner Audrey Edmonson.

Before joining the county, Mr. Braynon served in the Navy as a pilot, was manager of maintenance programs, did technical recruiting, and also flew anti-submarine warfare aircraft.

“I hunted submarines all over the world with airplanes, and I also flew into Central America, the Caribbean, as well as Latin America, including Venezuela, and Colombia,” he said. “I’ve even flown into Cuba on numerous occasions, not just Havana but also Guantanamo Bay.”

When Mr. Braynon got out of the Navy he became a pilot at Eastern Airlines and then started his own charter company for five years before becoming a public servant in the county workforce.

When asked about how his experience in the Navy and in the aviation industry shaped him to work in the county with ground transportation initiatives, Mr. Braynon said “it’s a mobility question of getting people from point A to point B.” For that purpose, he has two mottos: Toward a better world, and think globally, act locally.

“I’m looking to improve the world by what I do locally,” he said. “Through developing rapid transit, we’re not only improving the lives of those that don’t have vehicles, but we’re also improving the environment by taking particularly gas-powered vehicles off the road when people can ride a train.”