Advertisement
The Newspaper for the Future of Miami
Connect with us:
Front Page » Opinion » Sham votes in state expressway power play aren’t credible

The Greater Miami Expressway Agency gives every appearance of flagrantly violating Florida’s Sunshine Law as it continues a state power play to take over $4 billion in expressways from a county authority that has run them for decades.

Whether the state is legally entitled to grab the local expressways is being argued in courts, a question of whether its unique Home Rule Charter protects Miami Dade from a takeaway.

Let’s be honest here: very few of us stay up late worrying about who will run our expressways, whether it’s today’s local control by the Miami-Dade Expressway Authority (MDX) or the governor’s control, since he and an appointee have named all current members of what’s being called GMX and will name the majority in perpetuity.

But we might stay up late to worry about whether a government is willing to flout its own laws requiring that discussions leading to formal decisions be in the open.

Because either the governor and his team have decided that they can legally override open government or they are willing to purposely bend or break Florida’s strong open government laws, called collectively the Sunshine Law.

Among other things, GMX meets about Miami-Dade’s expressways in Broward County although none of the roads reach Broward. That limits residents’ ability to attend, which Florida law requires.

More limiting is short notice: after not meeting since April, the Oct. 28 Broward meeting of GMX was announced to the public only the day before.

Granted, public attendance would have been a waste of time. With a long agenda, every item appeared to have been cooked in advance. There was no discussion and no dissent.

Actions gave every appearance of being well scripted, but Florida law prohibits any members of a body from meeting or discussing in private items that might come before them. Unless each member had advance marching orders or was ordered not to say or do anything but vote yes, it was a nearly impossible feat.

The Nov. 4 meeting topped that: it was announced, without agenda, for 9 a.m. Another list of vital items passed unanimously without discussion, the chair made remarks, and it was over in 9 minutes. By 9:17 a.m. Miami Today had received a thorough press release of every action, including quotes from the chair, a release that must have been prepared in advance.

We have no proof of illegal communication outside the sunshine. But five people over two meetings voting to create a structure for an agency and plans for its future amidst a legal battle without a word of comment or a single dissent doesn’t happen on its own. 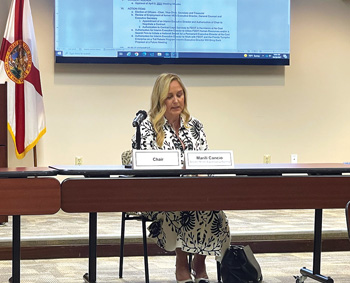 Among votes Oct. 28 were elections of officers, review of the employment of the executive director of MDX, its general council and executive secretary; appointment of an interim executive director; authorization for the chair to negotiate the interim director’s contract; having the Florida Department of Transportation (FDOT) handle all legal services; authorizing the new executive director to start a national search for his successor; and authorizing him to work with FDOT and Florida’s Turnpike Enterprise to create a toll rebate program. Nobody said a word.

Then, of course, there were formalities like swearing in members and reading minutes. The entire show – because it was a show – took 20 minutes.

The Nov. 4 meeting took a bevy of actions in the legal battle with MDX: authorized the interim executive director and general counsel to amend and transition all FDOT agreements; accepted the responsibilities of MDX (an issue still very much undecided in court); and authorized an MDX audit in the litigation.

These are all vital decisions in GMX’s future. But by some miracle everyone agreed on everything, said nothing, followed the scripted agenda to a T and managed to finish in nine minutes, with a speech and all.

Nobody from GMX will talk about any of this to Miami Today – even the PR person by the weekend had nothing to say.

But by appearance alone, the Sunshine Law was shattered and everyone went home happy. The open government law, apparently, applies only to the local MDX, which the governor and his team are battling to abolish, and not to the GMX they are trying to set in its place.

It seems obvious that if GMX ignores the public and the Sunshine Law while trying to take over the expressways, we couldn’t expect accountability if it actually did take control.

We don’t doubt that either the existing MDX or a GMX could keep expressways functional, collect tolls and pay off debt. Neither seems to have a monopoly on technical ability.

But the pretender to the highways throne, GMX, at this point exhibits zero desire to serve Miami-Dade residents or operate openly.

The courts are considering whether it is legal for the state to take over five Miami-Dade roadways and remove local Home Rule, which is provided for in the Florida Constitution. It might be relevant to also consider whether GMX’s actions, if taken outside of the Sunshine, should disqualify it from assuming that control.