Advertisement
The Newspaper for the Future of Miami
Connect with us:
Front Page » Communities » Largest beach sand spread in a decade will move at turtles’ pace 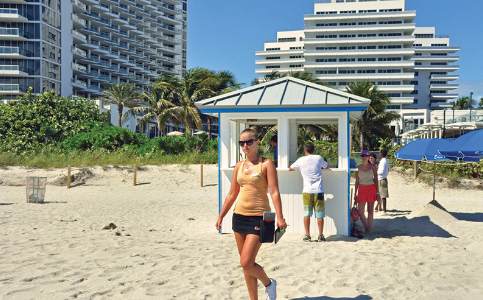 The Army Corps of Engineers’ delivery of 830,000 cubic yards of sand to Miami Beach, the largest spread in a decade, is ready to begin this month – pending the habits of sea turtles.

“We don’t have an exact start date because we have to work around the turtles and wildlife,” said Amy Knowles, Miami Beach’s chief resiliency officer. “Turtle season” is formally April 1 to Oct. 31, but the turtles don’t have a calendar.

“The whole project is trying to be done from November 2021 and finished in March of 2023,” Ms. Knowles said. “It’ll be a long timeframe, so when we’re working we’ll be working pretty quickly. But there’s not work during turtle season.”

The $40.5 million project is paid for by the federal government. “The budget is also on track right now, and we are fortunate to have federal funding,” she said.

The project stretches over 10.5 miles in Sunny Isles, Bal Harbour and Miami Beach. Four areas in Miami Beach will get sand deliveries: 63rd, 55th, 44th and 32nd streets. Beachgoers should expect to see trucks dumping the sand and workers spreading it with sifts and rakes. Parts of the beach where it’s being spread will be fenced off, Ms. Knowles said.

“It is the largest sand spread in a decade or so. We are focused on US sand and keeping it as local as possible,” she said. “We are lucky to have a mine so close, Vulcan Witherspoon, where they test and approve the sand. The sand has to be specific for the turtles’ safety.”

In Moore Haven, FL, the Vulcan Witherspoon Mine makes sure the sand won’t reach a temperature that damages turtles’ eggs because it can cause gender change within the egg, she said.

Sand renourishment is important in dealing with erosion and storm surges, Ms. Knowles said. “We want residents to understand that we are fortunate to have this investment because it focuses on our protection.”