Advertisement
The Newspaper for the Future of Miami
Connect with us:
Front Page » Real Estate » Extended care facility seeks 269 units on Coral Way 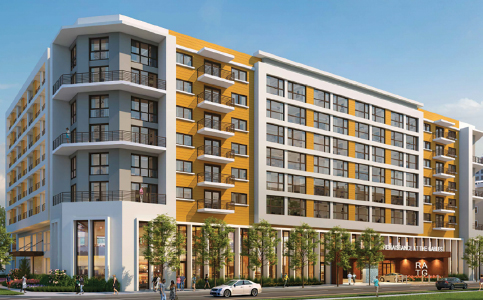 A developer plans construction of an extended care facility in the City of Miami’s Coral Way neighborhood.

To be called Renaissance at the Gables, the eight-story structure would have 208,545 square feet of floor area, offering 269 residential units and parking for up to 122 vehicles.

It is being defined as a community support facility, and the owner is named Renaissance at the Gables Inc.

The city’s Urban Development Review Board recommended approval of the project.

James R. Williams Jr., an attorney representing the owner-developer, said the company owns 1.5 acres on Southwest 32nd Avenue, consisting of five parcels. The owner is requesting a warrant to allow development of an extended care facility there.

The owner is requesting waivers to:

■Permit parking in the second layer above the first story. Laser cut metal panels with artistic cut-outs of foliage will be used as the required art treatment used to screen the parking area.

Mr. Williams wrote: “This project contemplates a specific use, namely, an extended care facility. Unlike traditional mixed-use commercial/residential uses, there is no practical use for habitable liner uses on the parking levels.

“Patient rooms cannot be located on the garage level and all offices and storage areas have to be located in a centralized area. Therefore, the applicant is proposing to use the parking levels for parking to the full extent permitted by the code, including the second layer above the first story,” he wrote.

The planned 269 units will be one and two bedrooms.

The project is to include “a very large zen passive recreational area” exclusively for residents and staff.

“The architect focused on designing the exterior of the building to more closely resemble the appearance of a luxury resort rather than a typical ‘cookie cutter’ institutional facility. The architect incorporated several Biophilic design concepts and considerations into the overall project design. Biophilic design focuses on increasing occupant connectivity to the natural environment through the use of direct nature, indirect nature, and space and place conditions,” Mr. Williams wrote.

He said the large internal green space listed as courtyard on the plans is an extremely important feature that perfectly highlights one of the many Biophilic considerations by the architect.

“Residents of extended care facilities typically have limited mobility or experience a certain degree of difficulty in their physical ability to connect with nature, which is why the architect and developer wanted to ensure that each resident had the ability to experience nature physically and/or visually from almost any location within the facility,” he wrote.

Valets will be responsible for parking all resident and guest vehicles in the garage, except for employees who will park their own vehicles. An internal turn-around space has been provided for vehicles that are only dropping off passengers, to reduce vehicular congestion.

Attorney Ines Marrero-Priegues, also representing the owner-developer, said the project is very much needed in this area with its growing aging population.

She told the board the screening of the parking levels is intended to blend in with nearby residential areas.
“We wanted to make sure it is attractive and compatible,” she said.

Pedro Ramos, president at The Architects Group, said when they designed the building, they tried to break up the mass of the structure with chamfered elements like bookends to the façade.

“We wanted to make it look like a luxury hotel rather than an institutional building,” he told the board.

“You had a great opportunity to utilize the corners for retail space,” said board member Fidel Perez. “I feel it does need to have some of that.” He said the commercial use wouldn’t interrupt the main function of the facility.

Mr. Perez moved to approve the project, with a recommendation to consider relocating the entrance and look at activating the corners with retail.