Advertisement
The Newspaper for the Future of Miami
Connect with us:
Front Page » Transportation » Opportunities seen in added Port of Miami rail cargo 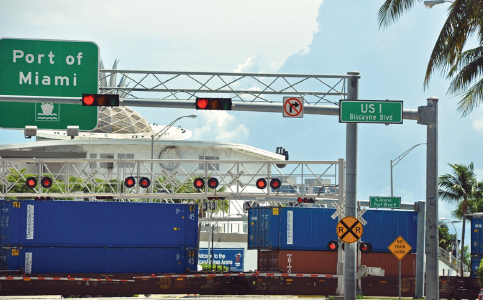 An eight-year-old Florida East Coast Railway link carrying cargo in and out of the Port of Miami is now hauling 60 to 80 loaded shipping containers a day from the inland US to sail seaboard to other nations, and operators say there’s plenty of room for expansion.

One or two trains daily roll east past the Freedom Tower, cross Biscayne Boulevard and head into the seaport, delivering their cargo to departing ships and carrying back from arriving ships 50 to 60 loaded freight containers headed around the Southeast.

While seaports elsewhere – particularly on the nation’s West Coast – are today facing logistics nightmares as arriving cargo sits offshore waiting to be unloaded, the port-to-rail link in Miami is reportedly smooth and on time.

The market share is divided: 46% of cargo is from Latin America, 33% from Asia, 20% from Europe and the Mediterranean and just 1% from Africa or Oceania, according to PortMiami statistics.

“We move, out of the port, anywhere from 60 to 80 containers daily,” said Robert Navarro, port director of Florida East Coast Railway. “Inbound, we’re moving from southbound cargo anywhere between 50 to 60 per day.”

Those are around 50 inbound containers to the port for delivery to the Marathon terminals around South Florida, and 60 to 80 outbound containers out of the port carrying import loads to inland point and for steamship lines that have services to Jacksonville and beyond – anywhere else in the US, Mr. Navarro said. “We’re a full-service terminal. We handle all imports and exports, and what they call empty container repositioning,” hauling the empties to where they will be most needed.

“We get southbound [cargo shipment] from anywhere in the US and we send northbound anywhere to the United States,” he said.

The freight trains act as a shuttle to the Florida East Coast Railway’s Hialeah Yard. From there, shipments are shifted to a larger train to Jacksonville. “So it goes past Jacksonville, and it goes all the way to Charlotte, or New Jersey or Chicago, or Los Angeles. They interchange with other railroads in Jacksonville, with Class 1 railroads such as CSX and Norfolk Southern.”

The trains into the port run mostly in evenings, Mr. Navarro said. “It’s an afternoon to late evening affair. Sometimes we’ll run two trains, and one would run early in the morning, but it’s very rare. We try to keep it just one round trip.”

The Florida East Coast Railway (FECR) freight rail system provides for the Port of Miami, Port Everglades and the Port of Palm Beach, connecting to the national railway system in Jacksonville. After years of inactivity, the railway was rebuilt in November 2013 with a $50 million project from Miami-Dade County that included restoration of the mainline rail that connects Miami to the port, a rehabilitation of the damaged rail bridge, restorations of the connection to CSX and Norfolk Southern and an update to the Hialeah Yard.

Freight by rail through PortMiami reaches Orlando in one day, Atlanta in two days, Charlotte in two and Nashville in three, according to PortMiami and FEC’s Inland Intermodal Rail Network data.

Mr. Navarro said there is great potential for expansion of these freight-transporting services.
“Rails are ecologically cleaner,” he said, “We’re able to get cargo out a lot more efficiently than a port truck driver going to the terminal and waiting for quite a while just to get one container. We can move containers in bulk, in larger volumes, in the span of one day than a truck can.”