Advertisement
The Newspaper for the Future of Miami
Connect with us:
Front Page » Government » Battle over expressways – MDX vs. GMX – back in courts

Battle over expressways – MDX vs. GMX – back in courts 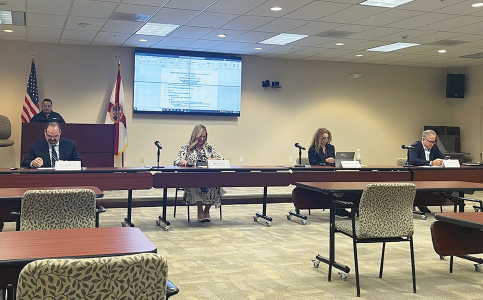 Miami-Dade and Tallahassee are back in court battling to control five expressways in the county, as the Miami-Dade Expressway Authority last week sued state-created Greater Miami Expressway Agency (GMX) and its five members. Also last week, GMX met for the first time since April and advertised a public meeting and a closed meeting in Fort Lauderdale today (11/4).

The suit seeks “declaratory relief, pursuant to Chapter 86, Florida Statutes, to determine the lawful owner of the roadways governed and or owned by MDX as well as all rights appurtenant to the roadways.”

It also cites the 1957 Miami-Dade Home Rule Charter under which “the authority of the Legislature in affairs of local government in Dade County ceased to exist.” An attorney for MDX, Eugene Stearns, told Miami Today that the charter “unequivocally” gives county government the power to create or abolish agencies, including those created by the Legislature.

Mr. Stearns told the newspaper that a First District Court of Appeal scheduled Nov. 3 seeks an order to dismiss a 2019 pending case on grounds of standing.

In 2019, Gov. Ron DeSantis signed a law to dissolve MDX and supplant it with GMX. But Circuit Court in Leon County subsequently declared that law unconstitutional.

Nonetheless, the case escalated to the First District Court of Appeal, which determined that MDX did not have “standing” to complain in its own name about an act of the Legislature abolishing it, a press note from Mr. Stearns says. But the creation of GMX and abolition of MDX was left pending.
County commissioners in May passed an ordinance invoking home rule rights and abolishing GMX. Mr. Stearns said in the press note “GMX is a ‘zombie agency’ that was abolished by the Miami-Dade County Commission through the proper exercise of the county’s home rule powers provided by the Florida Constitution.”

GMX’s Oct. 28 meeting, announced Oct. 27, lasted just 20 minutes with no discussion. In that period, board members selected a chair, a vice chair, secretary and treasurer, and appointed Florida Department of Transportation’s (FDOT) Chief of Staff Torey Alston as interim executive director with authorization to negotiate a contract, contract legal services to FDOT and permission to use the department’s Human Resources to begin a national search for a permanent director.

“The Sunshine Law requires meetings of two or more board members to discuss business that will come before the board [to be] in public,” Virginia Hamrick, staff attorney of the First Amendment Foundation, whose purpose is to protect and advance the public’s constitutional right to open government, told Miami Today. “If board members have private discussions on the votes prior to meetings, such closed-door discussions violate the Sunshine Law.”

The GMX meeting took place at FDOT’s District Four headquarters in Fort Lauderdale, Broward County, to avoid conflict with the May resolution from Miami-Dade County commissioners declaring the state agency abolished. Miami-Dade is in the department’s District Six.

Ms. Hamrick told Miami Today via email that the Sunshine Law requires all meetings of a board or commission of any state agency to be noticed and open to the public. “There is nothing in the Sunshine Law prohibiting the GMX board from holding a noticed and open meeting,” Ms. Hamrick wrote. But holding a meeting outside of a board’s jurisdiction is an issue, she said.

“They met in Fort Lauderdale because obviously they recognized they can’t meet in Dade County because that would be engaging in an unlawful act,” Mr. Stearns told the newspaper.

Previously, the nine-seat GMX board was to be composed of three appointees from the governor, two by the Miami-Dade County Commission, three by the Miami-Dade Transportation Planning Organization, and FDOT District Six Secretary Stacy L. Miller.

But a bill from the Legislature raised the number of seats the state fills from three to four so that the new board could have quorum to operate, as Miami-Dade County and the TPO have refused to name members until a court rules on the home rule constitutional issue.

“This reallocation of appointment authority is an escalation of the direct attack on Miami-Dade County’s Home Rule authority undertaken by the state when it purported to create GMX and abolish an agency operating exclusively in Miami-Dade County,” says the lawsuit filed last week.
Miami Today reached out to the FDOT’s Communications Office, both in person and by email, and spokesperson Tish Burgher said the department could not answer a list of questions as litigation is ongoing.

2 Responses to Battle over expressways – MDX vs. GMX – back in courts