Advertisement
The Newspaper for the Future of Miami
Connect with us:
Front Page » Communities » Key Biscayne’s big victory in coastal risk areas 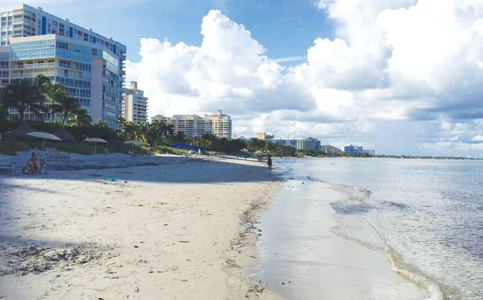 Key Biscayne’s inclusion in the Miami-Dade Beach Coastal Storm Risk Management project, headed by the US Army Corps of Engineers, to shore up the county’s vulnerable beachfront is a big win for the community, said Village Manager Steve Williamson.

“A good percentage of our population, now grown to 15,000, lives on the coast,” he said, “all the while knowing the risks of storm surge and sea level rise. We will now have the ability to seek solutions.”

The village learned of the success of its long campaign for inclusion during a presentation of the corps’ Tentatively Selected Plan (TSP) on Sept. 14, Mr. Williamson said. The TSP is expected to be released for public comment Nov. 4, followed in February by an agency decision laying out in greater detail what the plan would involve and opening up another opportunity for comment.

The corps had initially been leery, he said, due to concerns about whether the village would prove able to make good on its commitment to the project, but the approval in November 2020 of a $100 million general obligation fund to deal with the effects of climate change turned the tide.

“The approval of our residents probably won the day,” he said. “It insures that we can do whatever is needed to make sure that the federal government’s investment will be protected.”

There’s still a long process after that as the project wends its way through stages of community vetting, congressional approval and more. Mr. Williamson estimated it could be more than a decade before construction begins.

“Right now,” he said, “there are three commitments: to reinforce the dune across the entire waterfront, and install two tie-back walls perpendicular to the ocean along the northern property wall.”

The project is one of a number of feasibility studies 100% funded by Congress via a 2018 hurricane relief bill to identify ways to reduce damage from future storms. The Army Corps, with Miami-Dade County as its non-federal partner, initiated three local Coastal Storm Risk Management feasibility studies: the Port study, the Back Bay study and the Beach study that now includes Key Biscayne.

The corps’ Jacksonville district office took on the Beach and Port studies, he said, but declined the Back Bay study on the grounds that they lacked the necessary expertise. It went instead to the Norfolk district office, based on a model created after Hurricane Sandy.

“We have no history with them,” Mr. Murley said. While natural nonstructural features were generally acceptable, community feedback showed a strong bias against man-made structures. County Mayor Daniella Levine Cava has asked for a waiver to pursue a locally preferred plan incorporating more natural solutions.