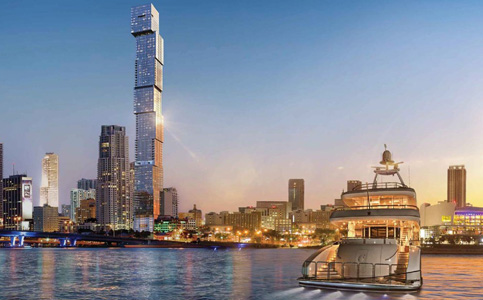 A tower of glass boxes rising 93 stories on Biscayne Boulevard downtown as home to a Waldorf Astoria hotel has been recommended for approval by the city’s Urban Development Review Board.

PMG Downtown Developers LP presented the elaborate plans. The site at the northwest corner of Biscayne Boulevard and Northeast Third Street, directly across from Bayfront Park, would become home to the city’s tallest building.

The project named 300 Biscayne would reach 1,036 feet, include 461 multi-family residential units, 205 hotel rooms and 1,321 square feet of commercial-retail uses, and would have parking for up to 694 vehicles and space for 356 bicycles.

The project is to include high-end amenities including swimming pools, a grand staircase, condo lounge, hotel lounge and bar, hotel pool bar and more.

The tower of mismatching boxes is to have penthouses. It was designed by Sieger Suarez Architects LLC.

Javier F. Aviñó, the developer’s attorney, explained to the board the request was for approval of a minor modification to Phase II of a Major Use Special Permit or MUSP, originally approved by the city commission on March 27, 2008. He said Phase I has already been constructed.

Mr. Aviñó said the applicant team has carefully developed the design of Phase II over the course of six years and is proud to present what will be a unique mixed-use tower.

In a letter, Mr. Aviñó said: “At 1,036 feet in height, it may be one of the tallest towers in the State of Florida, and will be home to the new Waldorf Astoria Hotel and Residences.

“The striking design will certainly become one of the iconic images of the Miami skyline. The structure consists of nine cubes of differentiated position. The top cube moves from the tower’s central axis toward the southeast, creating dynamic visual tension.

“Near the bottom of the tower, the third cube rotates in response to the pool deck while the second cube is positioned farther to the east, creating an outdoor dining platform for an upscale restaurant.

“At street level, the first cube rotates dramatically upward to receive residents and visitors, supporting the entire tower in an artistic fashion,” he wrote.

Due to the practical difficulties of developing a complex mixed-use tower approved under the previous zoning code and in order to comply with Miami 21’s current review procedures, the developer-applicant is requesting waivers, including:

■To allow a 5% reduction in the required drive aisle width from 23 feet to 22 feet.

■To allow parking to extend into the second layer along a secondary frontage for more than 50% of the length of that frontage.

“The proposed project will establish an iconic luxury hotel, residences, and commercial uses within a tower of remarkable design in Miami’s urban core,” concluded Mr. Aviñó.

Board member Robert Behar called the project impressive, beautiful and incredible. “In my opinion, it will be a very great addition to the city’s skyline. You’ve done a fantastic job … I’m ready to approve,” he said.

Acting board chairman Ignacio Permuy agreed, saying: “This is going to be a signature building on the Miami skyline.”