Advertisement
The Newspaper for the Future of Miami
Connect with us:
Front Page » Top Stories » Only two bid to repair shuttered Dade County Courthouse 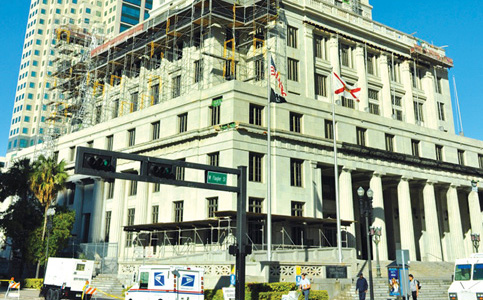 After a dozen companies came to an August pre-bid and site visit in the Dade County Courthouse basement, only two local companies bid to repair crumbling columns in the now-closed Flagler Street landmark. The county estimated the cost at $3.7 million with completion within 525 days after a notice to proceed is issued.

Work, according to Internal Services Department (ISD) documents, includes demolition; concrete restoration and steel rehabilitation of the 140-plus basement columns; placement of a new floor slab; and installation of a new waterproofing membrane system over the basement.

Home Express Corp. DBA HE Builders made two proposals with costs between $3.5 million and $3.8 million. The company, with Matias Otero as CEO and manager, has spent 15 years working in the buildings of South Pointe Drive on Miami Beach, its website indicates. The company says it focuses on residential high-end contracting and design of government projects.

Critical Path Services Inc. presented two proposals with costs of $4.9 million to $5.9 million. The Coconut Grove firm has over 20 years in South Florida, according to its website. Projects the company is already doing, under the leadership of CEO Craig Schaffer, include redevelopment and renovation of the historic George H. Fink Studio building in Coral Gables and the Convention Center “Pride” Park in Miami Beach.

The county has yet to start negotiations and decide which company offers the best time, quality, and price. “ISD expects to complete the evaluation within one month from the bid opening date (Sept. 17), however, this may be subject to change,” said Alba Vargas, senior assistant to the director at Miami-Dade Internal Services Department, in an email.

More details are unknown as the project falls under a bidding cone of silence.

An Aug. 2 memorandum from Juan Silva, division director of ISD, says the project is funded by the countywide Infrastructure Investment Program. The department seeks a licensed contractor with experience with construction materials that date back to the 1920s. ISD also requested that the Small Business Development Division consider 16.55% of Small Business Enterprise.

The 28-story building was closed in July until repairs are completed. The move came after the collapse of Champlain Towers in Surfside raised concern about the safety of old buildings such as the courthouse, which was built between 1925 and 1928.

As Miami Today reported in August, a June visual inspection by U.S. Structures Inc., a general contracting and structural engineering firm, reported that most of the concrete column encasements have varying degrees of concrete spalling and cracks, ranging from minor to severe.

A second report in July by EXP U.S. Services Inc. had similar findings.