Advertisement
The Newspaper for the Future of Miami
Connect with us:
Front Page » Government » Causeways plan split: Venetian out, Rickenbacker on slower track 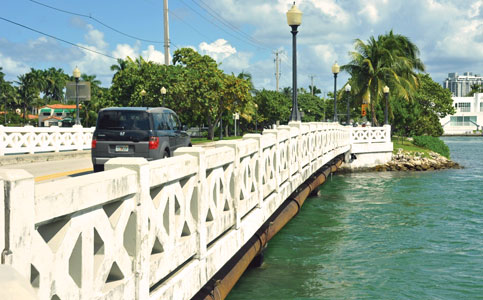 A resolution by Commissioner Sally Heyman, adopted unanimously at Tuesday’s county commission meeting, is to make the change in the existing request for proposals OK’d Aug. 15.

“Let the Venetian stand on its own, not because it’s not to be considered as a toll road for improvement, but it needs to have dialogue, and the existing work being done by FDOT [Florida Department of Transportation] and the historic preservation, and the potential for federal infrastructure dollars will play a part in decisions made for the various stakeholders there,” Ms. Heyman said.

The change comes after numerous requests from residents, businesses and elected leaders to have the Venetian Causeways excluded from the competitive solicitation and to have the improvements to, operation and maintenance of the road remain under the oversight and control of the county rather than a private entity, the legislative document explains.

The unsolicited proposal was presented to the county in March by a group of firms, identified as the Plan Z Consortium, composed of equity investor entity Partners Group (USA) Inc., and consultant entities Zyscovich Architects and J Kardys Strategies LLC.

Miami-Dade County and the FDOT executed an agreement for the department in 2011 to provide funding to the county to assist with the project development and environmental study necessary for the rehabilitation or replacement of the 12 Venetian Causeway bridges in order to ultimately seek federal funding for the rehabilitation or replacement work on the bridges.

The resistance to the Plan Z project not only comes from residents of District 4, represented by Ms. Heyman. The Village of Key Biscayne, in District 7, represented by Raquel Regalado, held a special council meeting Sept. 30 and unanimously supported a resolution requesting that the county mayor or county commission immediately rescind the request for proposals (RFP) related to the Rickenbacker and Venetian Causeways.

Miami Today reported in July that Partners Group (USA) Inc. is a private markets firm – based in New York – that since 1996 has invested $145 billion in private equity, private debt, private real estate, and private infrastructure on behalf of clients globally, according to its website.

J Kardys Strategies is a Miami-based company founded by Jack Kardys, a 36-year career county employee who retired as director of Miami-Dade Parks, Recreation & Open Spaces Department and is a former chairman of the board of the National Recreation and Park Association.

Bernard Zyscovich, CEO of Zyscovich Architects, told commissioners the group has been meeting with the county and the village and elected officials and advocacy groups for years and they have “listened carefully” and included everything of value into the proposal that the group is making.

“My belief is that when we politely refused to cover Virginia Key with an overhead highway, this is what has created this aspect of the village [of Biscayne] resisting this project,” he said.

“The reason I’m here today is because I believe in [the] integrity of the vision and the integrity of your process, and I request that you allow the process to finish, and then we will have community meetings and reviews,” Mr. Zyscovich said.

The Rickenbacker Causeway is the only means of access from the mainland to the Village of Key Biscayne. Miami Today reported in September that Key Biscayne residents and village council members had expressed disapproval and called the RFP “a veiled, obscure process that did not consider the realities of the village.”

On an individual motion, Commissioner Regalado proposed to move the timeline of the existing RFP that would affect the Rickenbacker Causeway to March 1, 2022. In the meantime, the office of the mayor is working on a value for money analysis that is to be presented to the public and to those affected by the project proposal.