Advertisement
The Newspaper for the Future of Miami
Connect with us:
Front Page » Top Stories » Miami commissioners push to ban use of scooters

Miami commissioners push to ban use of scooters 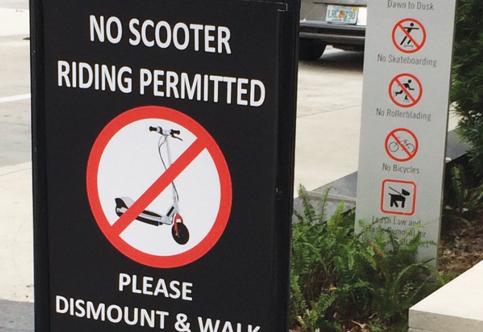 The scooter program in the City of Miami may be running on empty when it comes to continued support from elected leaders.

Proposed legislation to make the current pilot scooter program permanent is in jeopardy as city Commissioner Alex Diaz de la Portilla is expressing a desire to end the program for good.

He has an ally in Commissioner Manolo Reyes, who has been critical of scooters in the city before.

The legislation drafted to make the scooter program permanent was supposed to be voted on in June but busy commissioners have continued to defer the matter with no clear resolution.

The scooter program came up at the commission’s most recent meeting Sept. 23.

“I continue to voice my objection, and I have from the beginning,” said Mr. Diaz de la Portilla. “I voted for it (the pilot program) as a courtesy to my colleagues.”

He said he wants more safety measures for the scooters to continue, and is still pushing for a formal Request for Proposals, or RFP, that would have restrictions and safety measures built in.

“But I still remain concerned. I’ll make a motion to eliminate the program … I have no problem with that,” said Mr. Diaz de la Portilla.

Commissioner Reyes said, “I’ve been an opponent since day one. And I’ve received a lot of complaints from people who live in Brickell … and I’ve witnessed rather narrow sidewalks, there were a circle of scooters parked on the sidewalk and here comes this lady on a motorized wheelchair. She had to go up on the street and go back.

“These things are cluttering our sidewalks. They are dangerous and I think we should do what other cities have done: outlaw them.

“The only way to police it is, we need special police, and we don’t have that.

“If you stand here on the corner, you can watch minors on them, even racing. It is quite dangerous. We have a huge elder population. I’m afraid one of our senior citizens will get knocked down and be really hurt,” said Mr. Reyes.

Commissioners again put off a vote on the first reading of an ordinance to convert the existing motorized scooter pilot program to a permanent program, providing for increased fees for scooter operators, for enhanced penalties for violations of the program and other restrictions.

In May, Mr. Diaz de la Portilla proposed legislation to interrupt the program, saying he didn’t want Miami to be the guinea pig or see residents risking themselves for an experiment.

Mr. Diaz de la Portilla’s motion failed, and administrators were to ask companies in the scooter program to make sure geo-fencing technologies are in place so that scooters can’t leave the pilot program area, that of Commissioner Ken Russell’s District 2.

The city attorney advised Sept. 23 that the ordinance as drafted would establish the scooter program citywide and make it permanent.

“Is there no will to continue the program?” Mr. Russell asked fellow commissioners.

“This version (of the proposed ordinance) is not strong enough … but if there’s no world where this body can (have the program) survive then that’s the will of this body … I believe in it,” said Mr. Russell at the latest meeting.

“I made a motion to eliminate the program (in May), but I didn’t get a second,” said Mr. Diaz de la Portilla.

“Yes, months after you voted to keep it,” responded Commissioner Joe Carollo.

He asked the administration to come back with a proposal that would repeal the scooter program, and another to require a Request for Proposals with restrictions and safety measures.

City Manager Art Noriega asked which of those options he wants brought back because they are two different things.

“I’m not comfortable with something that is an accident waiting to happen,” he said.

Electric scooters got mixed reviews when they were first deployed throughout the city early in 2018. A lack of regulation and direction led to complaints, but some officials cited positive aspects that could help ease growing traffic gridlock.

The city attorney’s office went after operations of the scooters via cease-and-desist letters, and most scooters were removed from the streets.

Since then, scooters have gone through a series of pilot programs, all in Mr. Russell’s district as other commissioners opposed them in their own areas.

8 Responses to Miami commissioners push to ban use of scooters