Advertisement
The Newspaper for the Future of Miami
Connect with us:
Front Page » Government » Coral Gables digs into undergrounding of utility lines 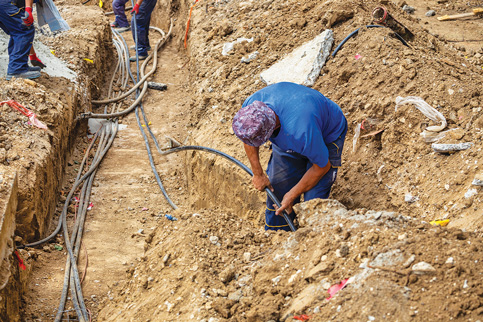 A Coral Gables project that would include citywide conversion of electrical and communications utilities’ overhead feeder lines that extend to eight substations outside city limits would come back in early 2022, after the pandemic shut down its progress.

According to a June update and report from the project lead team to the city commission to prepare for the possibility of a 2022 ballot question about the undergrounding of powerlines, power outages caused by storms create crises, particularly for the elderly, “who are dependent upon uninterrupted power for medical equipment.”

The city commission held a workshop to discuss the potential of undergrounding powerlines citywide on May 20, 2019. On Nov. 12, the project team presented a non-binding ballpark estimate from the Florida Power & Light, and City Attorney Miriam Soler Ramos and City Manager Peter Iglesias started preliminary analyses and planned to conduct community engagement workshops in April 2020.

FPL estimates a cost of $25,000 per property, with possible financing of $1,500 per year over a period of 20 years, said engineering consultant company Stantec’s Vice President Ramon Castella.

“At some point we’ll have to get a binding estimate from the FPL,” said Ms. Ramos. “And that’s viable for six months.”

FPL owns nearly all utility poles covering the almost 20,000 residential and non-residential properties in the city, serving over 80% of the city’s utility works, said the report. Transmission lines and substations would not be included in the undergrounding project.

Community outreach preparation included “neighborhood meetings with residents, businesses, and associations (at Coral Gables High School), as well as electronic communications, mailing lists, and a dedicated website containing community comment sections,” said the report. In late March 2020, the city suspended the rollout of community engagements due to the pandemic, and later last year the project was fully paused until the second half of 2021.

“There was support for the undergrounding project overall, with a general sentiment that property owners should be able to pay over a long period (e.g., 30 years),” said the report. “Residents also wanted to know when their own property would be converted once the project began.”

Among residents and business owners’ greatest concerns were having fewer power outages during and after storms and being able to “future-proof” the city and experience reduced disruption in electric and communication technology, according to the report.

The project lead team would also work in identifying potential federal funding to help cover the undergrounding efforts, “as the project would align with strengthening the electrical grid, building a future-proofed broadband network, and creating climate resiliency – all included in the Biden’s [American Jobs Plan] infrastructure proposal.”

According to the update, the length of completion of the project is 10 years and the total cost for the city is estimated at $350 million to $390 million, “to be paid by an assessment to property owners through city-issued general obligation bonds.”

The first year of payment would appear on the November 2023 tax bill, with actual payment due by March 2024 to the Miami-Dade Tax Collector, said the report. Exact assessment amounts would be evaluated property by property and the removal of existing FPL lines will be at no cost to residents and property owners.

If approved by voters, the report stated, the city would communicate and work directly with residents and property owners to execute the undergrounding of their powerlines.

The city is now looking to restart community outreach and engagement to discuss the project with residents and property owners and listen to questions and concerns. The next step is to obtain updated non-binding cost estimates from the FPL and to schedule a city commission workshop.

The project lead team recommends putting the question on the Nov. 8, 2022, general election ballot. To do so, the city commission would need to approve the ballot language before its July 2022 meeting.