Advertisement
The Newspaper for the Future of Miami
Connect with us:
Front Page » Education » Miami Dade College students flock back in greater numbers 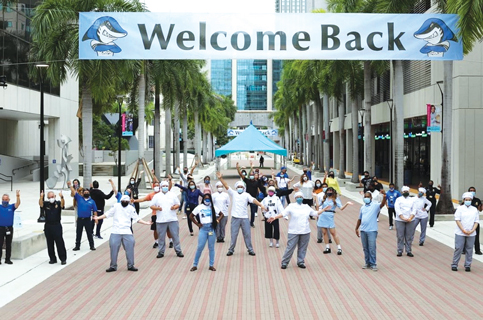 Miami Dade College continues to see an increase in enrollment, narrowing its gap to a 4% total decline from pre-covid days compared to 12% this time last year.

The college was standing at an overall 6% decline with the completion of the summer semester compared to pre-covid enrollment. With fall term enrollment numbers, the decline has decreased by nearly two percentage points, according to Miami Dade College President Madeline Pumariega.

“We are still registering students for the start of our 12-week and eight-week courses. So, our registration continues probably until mid-October,” Ms. Pumariega said. “We expect to continue to bring students through our Presidential Scholars program and other programs. We’re seeing a lot of interest from our students.”

Miami Dade College saw a large enrollment drop in fall 2020 due to the pandemic, with about 53,500 students compared to almost 61,000 in fall 2019, the college says. In September 2020, the college experienced the largest percentage decline at 17%, which the college says was reduced to about 12% during October’s mini-term enrollment push.

According to a report released last week by a Florida Senate panel, Miami Dade College is projected to have an enrollment of 41,527 students during this school year, which would be the largest enrollment in the Florida college system. The report projects that 293,000 students in all will study in the college system this year. After Miami Dade College, the three largest state college enrollments are projected to be 34,388 at Valencia Community College, 24,038 at Broward Community College and 18,945 at Palm Beach State College.

Miami Dade is one of the nation’s largest public colleges. Founded in 1959, it now has eight campuses and 21 outreach centers. Depending on the major or criteria a student is enrolled in, each campus is popular and trending on its own, respectively.

“Where you see a very heavy increase in enrollment at the Wolfson Campus is in cybersecurity, which is doing exceptionally well,” Ms. Pumariega said. “If you start thinking about programs and not campuses, everything with our cloud computing program increased in enrollment. Artificial intelligence programs are also increasing in enrollment.”

The North Campus, with the help of the School of Science, is currently drawing a larger geographic location with everyone from the North Miami area, followed by the Hialeah campus and Kendall campus, which are all contributing to closing the enrollment decline gap caused by the pandemic.

Currently, Miami Dade College reports it serves about 120,000 students a year throughout its 21 locations and centers.

“We have opportunities for scholarships and financial incentives for programs that lead to work, whether it’s digital marketing, our culinary institute or our business and finance courses,” Ms. Pumariega added. “What the pandemic has done is really accelerate innovation and the adoption of technology. I would encourage everyone to look for programs at Miami Dade College where we provide to upskill and get those skills that are needed for the future of our workforce.”